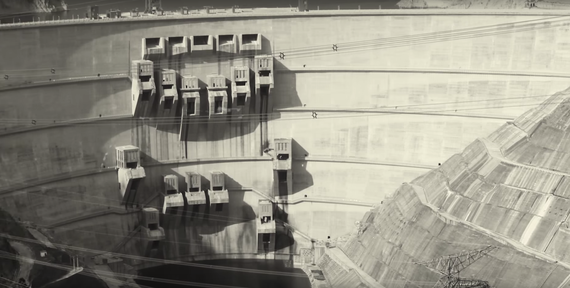 zom·bie dam
/ˈzämbē dam/
noun
1. A proposed dam project that activists successfully halt before it's built, only to see it rise again and again -- years later -- in different forms.

We've all seen classic zombie movies like Night of the Living Dead. If you haven't, here's a summary: A member of the undead threatens a group of humans, who hole up in a house and fight for their lives. They try tactic after tactic to beat back the zombie, and it seems to work...for a while.

But then the zombie pops back to life, and this time he's brought friends.

Fighting destructive dams can feel eerily similar to fighting zombies. Contrary to their 20th century image as temples to modernity, some of these projects can be more like mindless, tireless monsters bent on destruction.

At International Rivers, we fight the worst zombie dams one at the time. But we also try to rip out their brains -- the only way to lay them to rest for good -- by stopping finance, changing decision-making processes and giving local people a say in development decisions.

To even construct a dam, landscapes are denuded and people are driven from their homes and ancestral lands. Then the dam's reservoir floods even more land, driving more people from their homes -- between 40 and 80 million, worldwide, in the last century -- with no compensation.

Women, children, grandparents, husbands, farmers, workers -- they lose the only homes they've known. They lose their burial grounds, their religious sites, their productive riverside farmland. They lose their houses, their livestock, their communities. And they are cast out to find their way with very few resources, in a world that routinely looks the other way.

These horrors here aren't the chilling stuff of cheap Friday night films -- they're real. These monster projects have a mind of their own, and they're bent on one thing: total destruction -- of a river, of the people who depend on the river, and of the wildlife who call that river home.

And they do it because there is a lot of money to be made. Most of the time, there are better, cheaper and more environmentally friendly alternatives. But altruism doesn't drive dam building -- big business does. Who doesn't salivate over a lucrative contract with the government? But when these projects win, people and their rivers lose. And we don't like that equation.

We've come up with creative ways to fight these bad projects -- we target the financiers, the governments, the companies. We work with local residents to publicize their stories, support their struggle and win them a place at the table so they have a say over decisions that could change their lives.

We get information out, because often these projects are planned far away from the communities they'll harm, and nobody bothers to consult or even inform the people who will lose everything. And we may fight a destructive dam project for years, or even decades.

We might even celebrate and claim victory when the plan's cast aside. But then.. .a few years later... SURPRISE! The destructive project has risen from the dead, and it's back on the table.

We call them "zombie dams" -- the projects that just won't die. And while we're working on ways to neutralize these monsters (you have to destroy a zombie's brain, right?), we have to be vigilant in the meantime.

Meet a few of the worst projects below. None of have been built, some seem to be stopped, but if there's anything we've learned, it's that zombies can always come back.

Fomi Dam
Where: Niger River, Guinea, West Africa
First Conceived: Late 1940s
Who Gains: Guinea
Who Loses: Two million people in Mali
The Skinny: The Niger River is the source of immense life -- it feeds the Inner Niger Delta in Mali, which is a lifeline for up to two million people who depend on its bounty for pastureland, flood recession agriculture and fishing. It also hosts millions of migratory birds from Europe every year. Starving this delta would mean untold losses for some of Africa's poorest people and a host of wildlife. Simply put, it's a killer. So why is the World Bank reviving this monster?

Inga 3 Dam
Where: Congo River, Democratic Republic of Congo
First Conceived: 1925
Who Gains: Extractive mines, South African cities
Who Loses: The Congolese people
The Skinny: The Congo River has been called a place where dreams go to die. But zombie dams apparently find it a source of eternal life: Inga 3, the third in line after the troubled Inga 1 and 2 dams, has been a twinkle in some demon's eye since 1925. Its energy would go almost exclusively for industry and export -- not the 90% of DRC citizens who have no access to electricity. In fact, the project will add to the national debt burden and promote corruption, allowing powerful companies -- yet again -- to cheaply exploit and export Africa's vast natural resources. Power-hungry South Africa keeps reviving this one.

Xalala Dam
Where: Chixoy River, Guatemala
First Conceived: 1980s
Who Gains: Mexico, urban Guatemala
Who Loses: 8,000 Maya-Qechí farmers
The Skinny: This dam has a dark and troubled history. The 180 MW project would be built downstream from the existing Chixoy Dam, the site of major, government-backed massacres in the early '80s. The indigenous people here remember those awful days, and they know that government involvement in their region has historically only hurt them. (Almost 90% of people in the area have said "no" to the dam in a referendum.) Nevertheless, the government keeps trying to find bidders for this project. C'mon Guatemala -- let it die already. The Maya-Qechí deserve to live in peace.

Maheshwar Dam
Where: Narmada River, India
First Conceived: 1978
Who Gains: Unclear
Who Loses: 35,000 people in 61 villages
The Skinny: This is one zombie dam we've been fighting for decades. The dam, if constructed, would flood out 35,000 people in 61 villages. In the early '90s, we scared off international investors, but they returned in 2000, only to be scared off again. Finally, in 2006, the Indian government ruled that all construction must cease immediately. But this has been one incredibly hard project to kill, so we remain wary. Anything could happen.

Inambari Dam
Where: Inambari River, Peru
First Conceived: Unclear
Who Gains: Brazil
Who Loses: The Peruvian people, the environment
The Skinny: On June 14, 2011, the Peruvian government announced that the massive Inambari Dam had been cancelled after years of strong community opposition. For 36 days leading up to this decision, close to 2,000 people in the Puno area had been on strike in an effort to convince the government to cancel mining concessions and the dam project. They blocked access roads to the region and held mass protests. But have they destroyed the brain of this zombie project? Locals remain wary in spite of this decision and we will continue to monitor any new developments.