In August 1991, Soviet hardliners attempted to overthrow the progressive Mikhail Gorbachev, Secretary General of the Communist Party, in a desperate attempt to save the collapsing Soviet Union. Declaring a state of emergency, eight government officials named themselves the State Committee on the State of Emergency (GKChP) and forcibly detained Gorbachev in the Crimea, where he refused to resign. 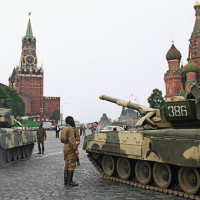 At the GKChP's behest, armored tanks thundered into Moscow on the morning of August 19th. Later that day, President Boris Yeltsin issued a statement condemning the coup and commanding those responsible to release Gorbachev. The coup disintegrated with little bloodshed two days later, on August 21st, when the soldiers withdrew and communications between Gorbachev and Moscow were renewed.

Although unsuccessful, the coup signaled an end to both Gorbachev's supremacy and to the Soviet Union, which would be dissolved in December of that year.

This account was compiled from an interview done by ADST in February 2003 with William Green Miller, who was working in Moscow for the American Committee on U.S at the time. Read the entire account on ADST.org MILLER: The battle for the survival of the Soviet Union was personified in the rivalry between Gorbachev and Yeltsin. When Gorbachev came back from the coup attempt in August, Yeltsin received him on the stage with such visible great contempt.

Q: What was the role of nongovernmental committees?

MILLER: NGOs came in to Moscow in abundance starting after the last Central Committee Congress, in 1988, during which Gorbachev gave his landmark speech admitting "there were white spots in history" and that "it was possible to have different views than that of the party," an admission and permission that began the end of the party....Every conceivable nongovernmental interest group started to arrive, and they multiplied almost like a plague of locusts....

Marxism was still deeply held. The Gorbachevian proposition was that Marxism could be reformed, that the era of change was necessary because of the failure of Stalin and his regime's brutality. The idea that it was necessary for socialism to have a human face was then widely believed. He believed in reformed Marxist solutions, he believes in it to this day. It's still a strong school of thought in all of the former Soviet states -- although it is a minority view, whereas it was once the only permitted view. 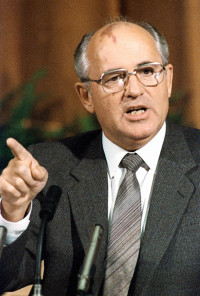 The hardliners, who were in charge of the security organizations, were the holdouts, but in the perestroika ["restructuring"] time, they were the ideological minority, although they were in charge of the security ministries. The August coup of 1991 was their last attempt to maintain control. And that was the question, whether the ideological change, the "new thinking" so called would prevail, or whether the hard-liners would allow the change to take place... [T]he futile, comic coup attempt, by the pathetic coup group, was a clear sign the change was irreversible.

Q: You were there during the coup attempt against Gorbachev, when Yeltsin came into his own?

MILLER: Yes, of course, but there was also the suspicion that Gorbachev was part of the coup. That's a thought that persists to this day, that Gorbachev was trying, in some way, to get rid of Yeltsin, that Yeltsin was such a threat to Gorbachev that this coup may have been a clumsy effort to get rid of Yeltsin. Yeltsin was warned by the KGB in Moscow and he escaped -- he was about to be captured. When I was Ambassador in Ukraine I stayed at Foros [a resort town in Yalta on the southwest coast of the Crimea], there where Gorbachev had been seized by the KGB.

Q: What was the viewpoint from the Moscow side of the fall of the Berlin wall in '89?

MILLER: Most important was Gorbachev's decision that people of each nation will make their own decision about the government they want to have.

The possibilities of working out a new democratic rationale for the Soviet Union [were] lost with the death of Andrei Sakharov. Sakharov was the only one who could have crafted a new viable confederation, a looser democratic arrangement of states within the territorial framework of the former Soviet Union. 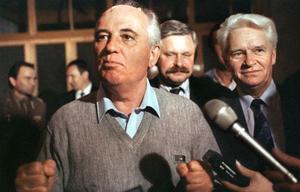 [T]he debate at that time centered on the issues of whether it was possible to have a confederation on new principles, principles of democracy, human rights, decent civic and civil behavior...

After all, the Soviet Union was a country that was founded on dreams, dreams that were almost never realized, of course. These dreams and hopes perhaps were never intended by the Stalinists and the leaders of the Communist Party to be anything more than temporary illusions. But in those years, there were dreams and hopes that seemed to have meaning and possibility. People were coming to Moscow from all over the Warsaw Pact region...

It was a very real hope -- that is, the possibility of a democratic Soviet Union.

Yeltsin, as you remember, championed the independence movement of Russia. His motivations, I would say were primarily personal. Yeltsin wanted to break the power of Gorbachev, his sworn enemy. I don't think it was the highest of motives. At the same time, many members of the Supreme Soviet were also elected to the Russian Parliament, so they served, for a time, in the legislature in both places. In the opinion of most political observers of the time, the very best, the most talented were those who decided to stay with the Soviet Union. I thought so too.

I would say once the Sakharov's moral and intellectual leadership was gone and there was a divided struggle for power between Yeltsin and Gorbachev, the impetus for self-determination, independent states, gained sway, and that was really the end. The coup attempt was very symptomatic. The coup was the last gasp, a last-ditch effort by a military coup, by those who wanted to keep the Soviet Union together. 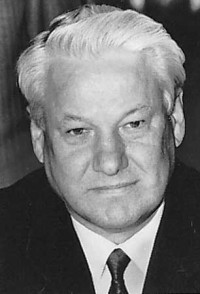 Q: How did your organization and you see developments prior to the coup? MILLER: There was a peculiar sense of stasis even in the midst of dynamic change. Many efforts were made to bridge the gap between Gorbachev and Yeltsin in the last year, but after the August failed coup, Yeltsin had the upper hand and he used his advantage to destroy Gorbachev's power.

Gorbachev knew that a coup was being considered and he may have been complicit, even if he was not directly involved in the actual carrying out of the attempted takeover. The Politburo had fractured, obviously, with the creation of Russia earlier in the year, and all that were left in the Soviet leadership structure were second-raters, but they were certainly controllable by Gorbachev, even in the diminished circumstances.

The Party, as an instrument of power, had disintegrated. The Party as a reflection of intellectual allegiances remained, but it no longer was the identity to the state.

Gorbachev still had the remnants of the power in his grasp, and he had great putative power. He could have, in the minds of many, put it together again. But the coup of August 21st, '91 was... the last desperate effort to hold it together. The coup was a crude device carried out by primitives and incompetents, as we saw. It ended disastrously, in such humiliation for Gorbachev. I witnessed the public humiliation when he came back from Foros in Crimea. It was horrible.

Well, it was the coronation, really, of Yeltsin, and a symbolic transfer of power. Yeltsin treated him very much in a way of a Roman emperor treating a king that had been defeated by the legions. It was symbolic; it was powerfully conveyed on television and throughout the world. Psychologically, the death blow was administered. One could see it, and everyone was affected. That was the decisive moment, when Gorbachev came back. 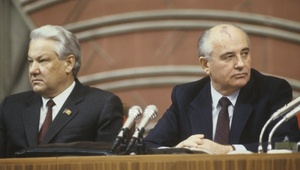