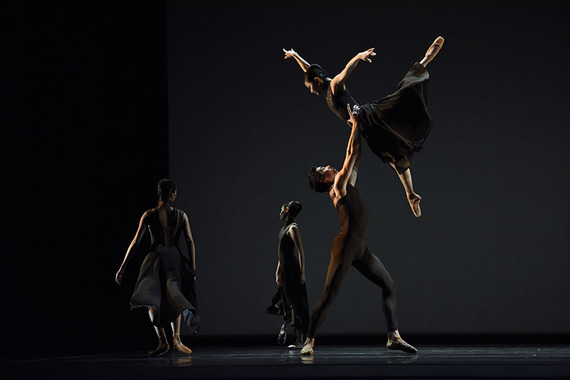 Thatcher had the cheek to venture through the knotty baroque thickets of Bach's "A Musical Offering" and "Goldberg Variations," well trammeled by legendary choreographers (Jerome Robbins, Paul Taylor, and Trisha Brown, for starters). What a gift his Manifesto turned to be for the 12 plucky dancers from the company's corps and soloist ranks who danced the work superbly -- led by the commanding Jennifer Stahl, partnered with great sensitivity by Sean Orza. 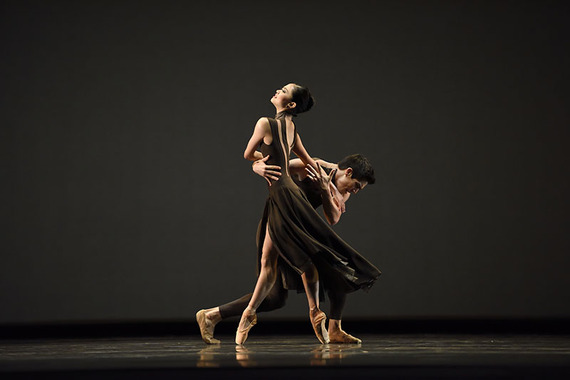 Thatcher's male-female duos and riveting group patterns form a series of geometric responses to Bach's mathematically embedded canons. Math-phobes can rest assured, however, that Manifesto steers clear of the dizzying acrobatic routines that often masquerade as contemporary ballet. Strong emotional connections between these dancers appear to drive their movement, and individual personalities emerge, particularly in the brief moments when one dancer breaks free from the ensemble.

The elegant, neoclassical vocabulary is framed by a spare, eloquent semaphore of the arms that nods to the strict classicism on view in the final piece of the evening: the Act II excerpt from La Bayadère. Manifesto doesn't defy balletic conventions. It merely stretches them, most intriguingly during the lifts in which the women continue to change shapes in the air, even as they are propelled offstage -- hinting at interesting goings-on backstage to which we are not privy. 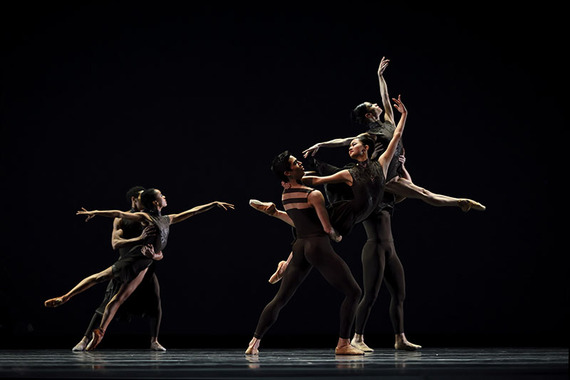 Mark Zappone costumed the ensemble in a sleek, faintly gothic vibe: both men and women in high necked sleeveless tops in shimmering shades of dark umber, with sheer panels cut out of the back. Women sported sparkly earrings and slashed skirts that revealed plenty of thigh during the many arching, swooping lifts. A little too obscurely lit, the ensemble resembled an unkindness of ravens, albeit very chic ravens. The breezy, youthful energy and forthright emotions might have been better showcased in simple play clothes - T-shirts and shorts, perhaps - or more dramatically with a change from formal to play clothes midway through. 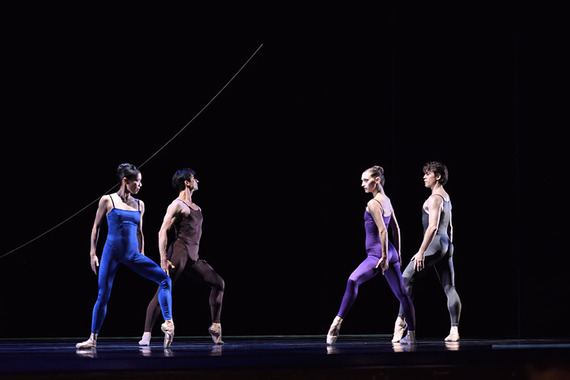 For all the good taste, musicality and sophistication on display in Manifesto, Thatcher will have to go through a rebellious phase if his dance-making is to break new ground. He could do worse than study the angry, furniture-tossing work of Ballet Hall of Famers Hans Van Manen and William Forsythe - though Tuesday night's lukewarm programming showcased their less compelling creations. Two couples stalk each other in Van Manen's Variations for Two Couples, while Forsythe's The Vertiginous Thrill of Exactitude proves no more than a terrific aerobic workout for the five dancers trapped on its kooky planet. 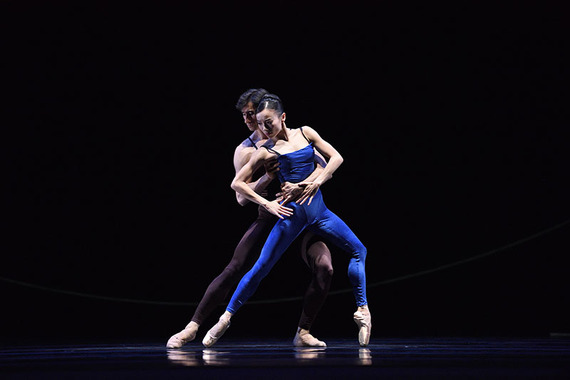 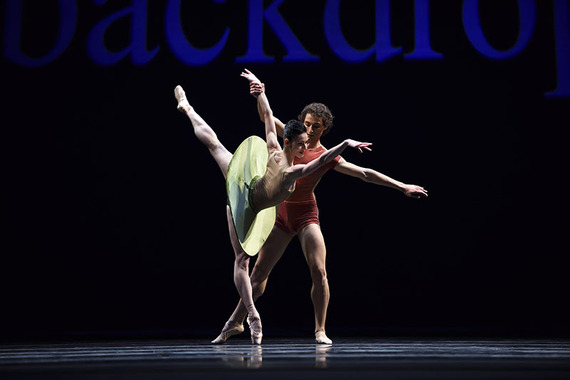 Sofiane Sylve inspires awe in the lilypad of a tutu she is forced to wear in Vertiginous Thrill. With her imposing physique, she can pull it off. The more diminutive Frances Chung and Vanessa Zahorian take a while to convince us that they don't look silly in it, and by the end, all five dancers - including the dashing Carlo Di Lanno and sterling Gennadi Nedvigin in their burnt orange short shorts - win our admiration for their take-no-prisoners athleticism. But all that endless bending and twisting from the waist and breakneck échappé-ing (the balletic equivalent of jumping jacks) make a better advertisement for Cardiobarre than it does for what goes on in the opera house. 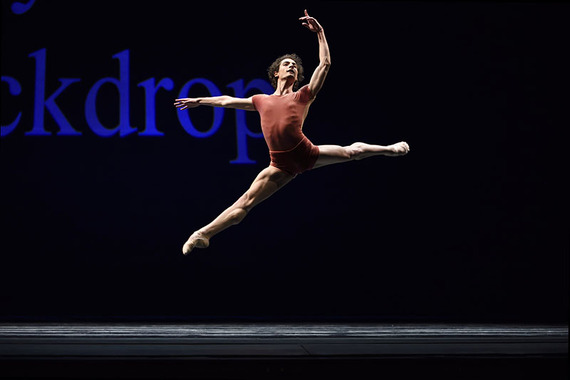 The hardest dancing of Tuesday evening came at the end, in Makarova's staging of the enduring "Kingdom of the Shades" scene from the 19th century La Bayadère. The scene is littered with balletic land mines, starting with the ramp down which troop 24 ghostly apparitions in tutus seemingly stitched from cumulus cloud. Nerves of steel are required, but a few wobbly legs in arabesque could not detract from the sublime spectacle. 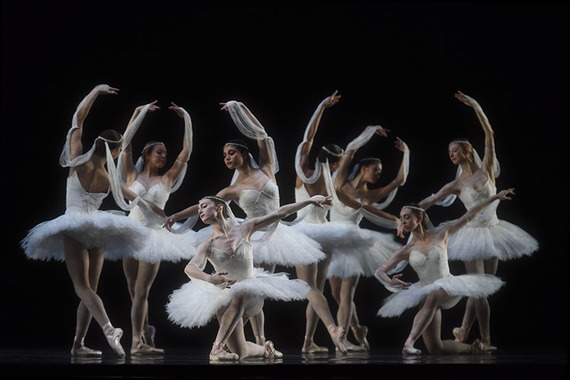 An alarmingly gaunt Yuan Yuan Tan appeared as the spirit of the temple dancer Nikiya (assassinated by a rival in Act I). The hunky Taras Domitro in the role of Prince Solor - full of remorse for having abandoned Nikiya for a wealthy princess - had every female in the audience, and some of the men, at his feet, and his opening pas de deux with Tan was suitably tragic. He soared through his variations, noble and clean, avoiding the exhibitionism that afflicts many danseurs in this role. Tan faltered a bit during the fiendishly tricky scarf pas de deux. But any hint of frailty was banished thereafter, her blistering turns down the diagonal and hops backward in arabesque practically igniting the stage.

Tan's admirable lieutenants, the coquettish Mathilde Froustey, diamantine Wanting Zhao, and patrician Dores André executed their solo Shade variations with great flair (minus a couple of tiny tremors) but it was Zhao - in arguably the most challenging Shade solo - who took our breath away. She came out of the starting gate all guns blazing, landing the notorious sissonnes développées and slow pirouettes with a stillness that reminds us that it is not just how high you jump or how fast you spin, but how you finish that separates the women from the girls. She bobbled an easier step moments later, but overall her austere lines and steely sang-froid left the most indelible impression of the entire evening.