Even if Bourguiba has emerged in the Tunisian political scene as a successful patriot, he can't erase the memory of another popular patriot, the martyred union leader Farhat Hached, who would have definitely given Tunisia a very different identity.

It would have been more democratic than the Bourguibian enterprise, which was marked by an over-inflated ego, curbing the country from progressing.

The Supreme Combatant's politics ensured that the Islamist worm contaminate the Tunisian fruit; he wanted to eradicate Tunisian spirituality and replace it with piousness. This piousness is now at work, threatening Tunisia's salvation.

"The Nobel prize attested to the talent of this intelligent people. Tunisians don't deserve the current political class that ignores its genius while too busy serving petty personal interests."

Therefore, as it celebrates the fifth anniversary of January 14, Tunisia is asking itself, not who will come to its rescue, but when its destiny will be fulfilled, for the sake of peace in the Mediterranean and the world.

In "Romancero Gitano," a major poetry collection of contemporary Spanish literature, published in 1928, and poet Frederico Garcia Lorca's most renowned body of work, inspiration from the popular and sensual Spanish society is apparent. They share qualities with the Maghreban societies; their vivacious Tzigane cultures from Andalusia have Amazigh roots.

In this marvelous collection, which is set in key locations in Maghreban history such as Grenada, Cordoba and Seville, we come across "Sleepwalking Romance" (Romance Sonámbulo) in which the patriot Lorca wonders:

Pero quién vendrá? ¿Y por dónde...?(But who will come? And from where?)

This is exactly what the Tunisian people are wondering by celebrating, bittersweetly, the fifth anniversary of their biggest achievement; a people's coup or a postmodern revolution that, similarly to the Egyptian movement, slyly turned into a counter-revolution. And the popular backlash emerged quietly as well; people silently waited for a Tunisian Messiah to save Tunisian democracy.

Tunisia is nothing if not an exception! The Nobel prize attested to the talent of this intelligent people. Tunisians don't deserve the current political class that ignores its genius while too busy serving petty personal interests.

"Political metamorphosis will not benefit this small country alone; it will naturally be diffracted to the whole Mediterranean."

Currently, Tunisia is made up of ambiguities. This eclipses its originality, which is necessary for its success. Its poetry dwindles in the alleys.

However, a poetic trajectory is more visible than ever-- one that links the soil of ancient Carthage and the spirit of Andalusia to a new Carthage and/or Andalusia. This future would go beyond the current use of religion, imitation of the West, and the capitalist exploitation of the country.

This is what Tunisia needs. Political metamorphosis will not benefit this small country alone; it will naturally be diffracted to the whole Mediterranean. Tunisia's importance cannot be ignored by the West.

In Greek mythology, Elpis represents hope in the shape of a beautiful young girl, wearing a crown of flowers, a cornucopia in her hands. 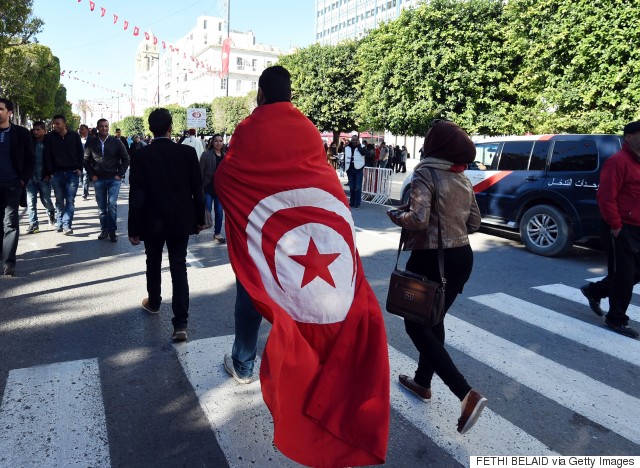 A Tunisian man during a rally on January 14, 2016 in the Habib Bourguiba Avenue in the capital Tunis to mark the fifth anniversary of the 2011 revolution. (Fethi Belaid/AFP/Getty Images)According to Hesiod's in "Works and Days," when Pandora let all the evils of the world escape, Elpis remained trapped at the bottom of the jar, the famous Pandora's box. And this is where we are in Tunisia! The country is prey to all the evils of the earth. Despite the presence of hope, it remains lurking in the depths of the jar.

This beautiful girl is like Tunisia, awaiting her prince charming to release her from her jar. Which of its children will have both the anger and the bravery to change the odds so entirely, from distress to prosperity?

A Messiah is awaited in Tunisia! Wise men are already on their way to pay homage to him. Real patriots should also start seeking him out!

In Tunisia, hope is a waiting game. As Pascal said (Pensées 172):

We never live, but we hope to live.In another reading of the myth of Elpis, the young woman representing hope is one of the evils contained in Pandora's jar, a seductive and diabolical woman, created by God to avenge the rebel Prometheus. Even though she remains in the jar once all the other evils (hunger, misery, silent illnesses) have been released to devastate the world, she is just as destructive as the visible evils.

This is how it may seem to those who do not believe in the humanity trapped deep inside of Man. These are people who do not know, and refuse to acknowledge, that in all men, all humans, there is a piece of the devil, because in the end, it's the devil that becomes the angel.

Those who are satisfied with Pandora's company, the beautiful jailer of Elpis, are aware of her obvious duplicity. She is both "a chaste young girl" and a devious liar, who wears a golden necklace and spring flowers, and uses seductive language. However in reality, femininity is far from having such traits.

Yes, she may be two-faced. Because this is what the zeitgeist imposes. She is trapped in the jar, where she is also hiding so as to not to be linked to the evil that is raging in its wake on the outside.

But just like a sleeping beauty in a forest, Elpis is patiently awaiting her prince charming. Tunisia is waiting and hoping for freedom.

This waiting period takes place in silence, as the illnesses brought to mankind from the gods, all the gods, have their voice taken away from them in the myth of Elpis. Only hope can talk, but it must be freed before its voice can be heard over the racket caused by the ills. This anticipation is all the more jealously guarded by the gods.

This truth is slowly but surely emerging through the trials and tribulations of the Tunisian situation. It is leading towards a new way of living together, a togetherness, and a truth that remains obscure.

Hope --the Elpis of Tunisia-- is a constant in this country.

Still ambivalent, enigmatic, troubled, this truth is already in our streets for those who are able to see past appearances.

The alien king is among the crowd and he is wise, announcing a New World epiphany that Tunisia will be at the epicenter of.

It is the lover of the people, Farhat Hached, who dared say in times of hatred, similar to those we are currently in: I love you oh people!

We hope that year five of the Tunisian people's coup will be the dawn of a new era on the ancient Carthage, a new Andalusia where people will sing Jacques Brel's pledge of love:

Oh my love,My soft, my tender, my wonderful love,From the clear dawn to the end of the day,I still love you, you know, I love you!

This post first appeared on HuffPost Maghreb. It has been translated into English and edited for clarity.