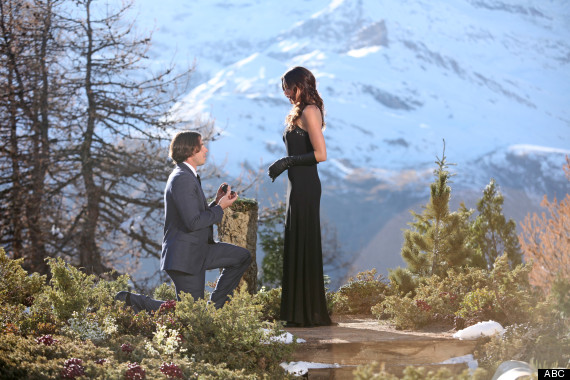 It's been a whirlwind 10 weeks as members of 'Bachelor' Nation tried their hardest to keep it under wraps that Ben chose Courtney to be his vineyard bride. Too bad most of us missed the "After the Final Rose" because our DVRs didn't recognize that the episode was part of the same "The Bachelor" franchise (as if any of us watch this live). Along with the actual finale, a few controversial moments reared their ugly heads during the extra bonus hour of Our Host Chris Harrison asking the same variation of one question at least 12 different ways. He's truly a master.

But let's start with the actual finale. Roughly 120 minutes of Ben pretending to struggle to make a decision between the horse girl and the model was about as riveting as watching paint dry or grass grow. The season has been as boring as his monochromatic wardrobe. However, there were pockets of energy here and there tucked away in unlikely places.

The Matterhorn
What was up with Ben's infatuation with The Matterhorn? There was a definite connection with the famous mountain and Ben's soul. In it, he found solace, peace and a sense of direction. I found it weird, unusual and completely creepy when he started talking to it.

Big Sister Julia
Ben's sister Julia has got to be the coolest character this show has ever seen, apart from Harrison, Ames and Chantal's Dad from Brad's season who had a statue of a naked man hidden in the west wing of his mansion. When Ben shared Courtney's occupation with Julia, her quick response was a glaring, "Really? A model. Come on, Ben. Please." That's the moment she endeared herself to me. Later, she drags Courtney to Ben's balcony overlooking his beloved Matterhorn and opens with this gem, "So. Why did all the other girls hate you? That's a red flag to me."

I like to think Julia is the Tim Gunn persona that this teetering reality show needs. Somebody call Fleiss. And make that work.

The Return of the Superhero Cape
If you ever find yourself landing in a helicopter on the side of the Swiss Alps before traipsing up a decorative path to meet your possible future fiance, capes are all the rage to wear over your cocktail dress. Lindzi chose an emerald green Oz number draped over her blue feathery frock inspired by Fraggle Rock characters everywhere. Courtney decided to class up her dominatrix gown with a white version of the exact same cape. It wasn't awkward at all. What was awkward is that both ditched said capes and handed them to Harrison of all people to hold while they trudged up the mountain to receive their "it's not you, it's me" or proposal speech. Where's the ABC intern when you need him?

Best line of the night had to go to Lindzi as she's given the old heave ho: "When this doesn't work, call me."

The Tracks of His Tears
During "After the Final Rose," Harrison asks Courtney if she and Ben are still together, even though he pretty much ditched her when the show aired due to the fact that she was an awful, mean girl reincarnate. Courtney says yes, changes it to maybe and then finally breaks down in dry heaves saying that she doesn't know. Not a single tear dropped from either tear duct. Harrison reminds the Model that they broke up before calling Ben out to the stage. He confirms that they are engaged, working through issues and neither trust the other at this time. A recipe for success! Harrison somehow procured the engagement ring, dramatically pulled it from his pocket and invited Ben to "do with it what he wishes." Ben cries and blames the media for soiling their engagement and puts the ring back on Courtney's finger, who periodically wipes away fake tears.

This in no way, form or fashion is going to last.

America's Favorite Couple
But what has lasted is America's favorite couple. No ... Trista and Ryan are Spring Breaking in Vail this week. It's JP and Ashley? Who you ask? Me too! I've already forgotten JP's New York accent and it only takes moments for me to remember that Ashley's entire wardrobe is fashioned from the Build-A-Bear store in downtown LA. These two kids are crazy in love, have zero plans to get married and somehow, garnered 20 minutes of precious "After the Final Rose" air time.

What did you guys think? Is Courtney totally playing Ben now? Or is the whole thing a big fake relationship to make ABC executives not look like complete tools? Where was Lindzi during "After the Final Rose?" Are you excited about Emily being the next Bachelorette? Sound off in the comment section.

For the entire recap, feel free to visit www.iHateGreenBeans.com