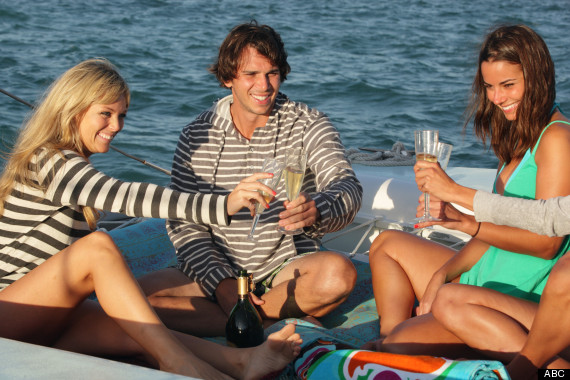 Note: The following contains spoilers if you have not seen Season 16, Episode 7 of ABC's "The Bachelor."

I'm so excited that our Bachelor has narrowed down the competition to four women. That means we only have a few more weeks before this brutal season is over. I have said it before and I'll say it again: Thank goodness we still have Courtney in the running. Otherwise, we'd spend two hours every Monday night watching Ben paint the town beige in his bland-colored v-neck tee and unkempt coif. Since the episode was void of anything that fell in the vicinity of entertainment, I decided to approach the recap as a study in anthropology. Is there something from week seven that could help us understand this cultural development known as "The Bachelor"? I think you'll see from my social customs list below that the answer is a resounding, "Yes."

Lessons Learned from Week Seven of "The Bachelor"

Never write down your actual fears on the contestant application form.
It would appear that every single girl vying for the affection of Ben has conquered a fear, which can't be just a coincidence. Lindzi is afraid of heights so naturally, she has to jump out of a helicopter into something called the Blue Hole. Rachel is afraid of sharks. She's even fearful that sharks will bite her in lakes as well as oceans. Let's choose to ignore the fact that her primary school education failed her in defining fresh water versus salt water marine life and stick to the theme of scared women overcoming their phobias with Ben by their side. May I suggest to future contestants that you answer this portion on your application by stating something along the lines of:

If you're going to write a fake fairytale about your relationship, make sure you've been in one with the person for longer than three dates.
After "taking a leap of faith" together, Ben presents Lindzi with a piece of paper, pen and a bottle. The producers have instructed them to "write their story" on the paper, shove the memory into the belly of the bottle and then hurl it into the placid sea where it will undoubtedly be retrieved from someone vacationing in the cabana next door. Ben writes an epic fairytale second only to Homer's "The Odyssey" in length. The poor post-production crew had approximately two minutes of footage of Ben and Lindzi to fill a five-minute voiceover. We can only watch the inaugural cocktail party entrance on her horse in slow motion so many times before it becomes just plain sad.

Don't date a girl who only has guy friends.
When a girl says that she doesn't have any female friends because they are too dramatic, that is standard code that she is flying some sort of freak flag. When three women confirm that this girl's motives are questionable, take note. Which brings me to ...

Don't talk smack about the model.
She's a model. He's going to take her to the fantasy suite. Let's keep our head in the game, ladies! You talk smack about the model and you're digging your own grave. Poor Emily never was able to recover from her tattling session with Ben and as a result, she was forced to smile at Courtney as she flaunted her rose. Fortunately for Kacie B., she had already secured a rose on the group date. I'm not sure why Nicki is still in the picture, but let's just say she dodged a bullet on that one.

Let host Chris Harrison choose your wardrobe.
Sure, Ben sported a few pops of color here and there in his t-shits and swim trunks, but striped tank tops from the bargain bin in the women's department of Old Navy is where I draw the fashion line. He has Harrison at his disposal. If he's not willing to ask the good host to take him under his wing, at least copy the guy's impeccable taste in clothing. A solid blue button down and a nice pair of chinos go a long way, Ben. And use a comb once in a while.

What did you think about last night's episode? Were you as bored as I was? Are you excited about the home town dates? Were you shocked that Emily went home and Courtney got the rose? Feel free to sound off in the comments section.