The third installment of Desiree's search for a man-child fiance includes three games of dodgeball, five fake cowboys and one lying contestant. Welcome to true love, y'all.

Chris Harrison opens the third episode by popping by the "Bachelorette" mansion and informing the remaining dudes that there will be two group dates and just one one-on-one date this week. Chris, Brian, Drew, Michael, Brooks, Brad, Mikey, Brandon, Zack K. and Ben get the first group date. We're all reminded that everyone still hates Ben for stealing time with Des last week -- especially Michael.

Not Your Grandfather's Dodgeball
The men pile into cars and head over to the site of the first group date. They all think Des looks "amazing" and "gorgeous" and "hot." Shockingly, she thinks they're "amazing." How amazing! Before they can get too caught up in a compliment cycle, a garage door opens, revealing a team of intense-looking professional dodgeballers. Their fearless leader gives a monotone speech about how serious dodgeball is, and all of Des' suitors are thoroughly intimidated. Des is excited to see the men compete and interact "in their natural state," which appears to mean playing fifth-grade-recess games while wearing sweatbands. "Balls are flying!" exclaims Zack K., and Twitter explodes with "balls" jokes. 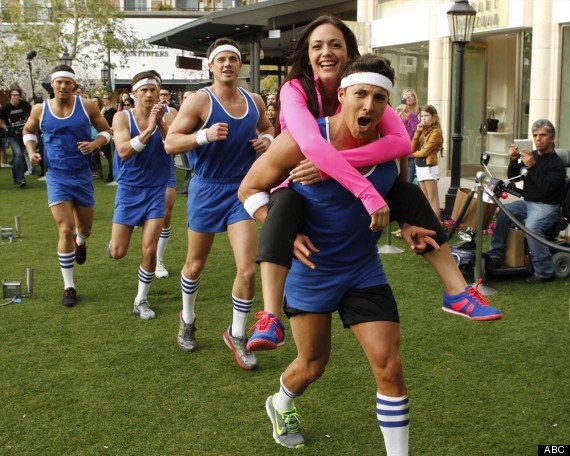 The men are split into two teams (Mikey, Michael, Brooks, Chris and Brandon on the Red Team vs. Ben, Brad, Zack, Brian and Drew on the Blue Team) and change into man tanks, tiny shorts and knee socks. Michael explains that "this isn't my grandfather's dodgeball." He also expresses concern about the balls flying around his face and I resist making a "Clueless" reference out loud while alone in my room. The Blue Team wins the first dodgeball game, and the Red Team wins the second round. Before they can finish their third and final game, Brooks hurts his finger and has to be transported to the hospital to have it set, which, judging from the look on Des' face, is the most serious injury she's ever witnessed. After Brooks' dramatic exit, Zack wins it all for the Blue Team, but Des decides to take all of her suitors on to the second half of the date -- even the dodgeball losers.

While Brooks is sad and hooked up to oxygen for some reason at the hospital, Des is drinking on a rooftop with the rest of the group-date guys. During this installment of Who Has A Sadder Backstory:
--Brad reveals his "haunting" past which includes a 3-year-old son named Maddox and an alcoholic ex who once slapped him with a (false) domestic violence charge and restraining order. Totally not too much to discuss on a second date, right?
--Chris stares anxiously at the rose for 10 minutes before finally pulling Des aside to a "secret" spot on the roof. He tells Des that he's 100 percent not skeptical about finding true love on reality TV now.
--Brooks shows up looking like a woozy, bandaged mess, but Des is clearly into him. "I love my conversations with Brooks," she says, as they say three words to each other and make out.
--Des ends up giving the rose to Chris, and they slow-dance and kiss during a "private" concert. However, all the other guys are able to creepily watch from another part of the rooftop and get jealous, so apparently it's not that private.
--Chris thinks his time on "The Bachelorette" is a "fairy tale." Maybe he and Des are meant to be...

Hell Hath No Fury Like A Woman Scorned (On TV)
Des is pensively sketching on her couch, as women do, when she receives a not-at-all-obviously staged phone call from Chris Harrison informing her that he has some "bizarre" news about one of the guys and she must drive over to the mansion in her mint Bentley to confront him immediately! This is NOT a game, says Des. Meanwhile, Kasey, who is supposed to have the one-on-one date, is blissfully unaware that his perfect day is about to be derailed. Apparently, Brian, the dashing young man who has a penchant for hot pink V-necks, has a girlfriend and has been lying to Des this whole time. Not cool, Brian. Not cool.

Des pulls Brian aside and asks him if he's really serious about this process. Bri digs himself into a deep hole by saying things like "My past relationship ... was over a long time ago," and then Chris Harrison arrives with his GF, Stephanie, in tow. She immediately hugs Des and begins berating Brian. We learn that the pair may or may not still be dating, Stephanie is a single mom, she once threw rocks at Brian and they slept together two days before he came on "The Bachelorette," which she thought was a "business trip." Des decides that Brian is not there for the "right reasons," so she has him escorted to his room by the camera crew and he leaves for good.

Right Reasons, Wrong Date
After Brian-gate, Brandon begins crying because he was once abandoned by men who dated his single mom. Obviously, Brian's "betrayal" is all about him. Meanwhile, Kasey, Desiree's next date, proclaims that he IS here for the right reasons. He and Des ride off into downtown LA where they see some people dancing while suspended on the side of a glass building. Naturally, the couple will be joining them! 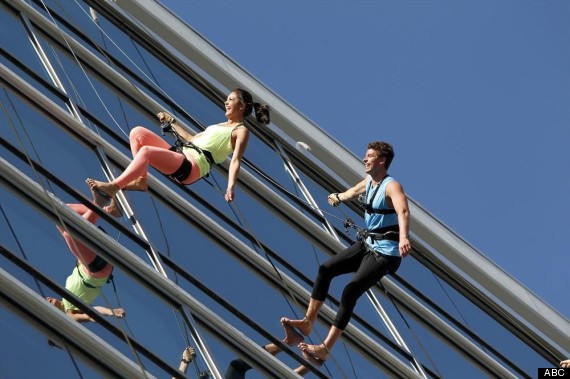 They get harnessed up and start "Bandalooping," but Des' heart just isn't in it. She tries to salvage the date with some rooftop champagne and swimming but the wind knocks everything over and the pool is freezing. They make out briefly in the water while shivering with towels on their heads, but the date ends with the pair huddled for warmth in a stairwell. Clearly Mother Nature is telling all of us that Kasey and Des are not meant to be, but he ends up getting an "A for Effort" rose anyway.

In Which Juan Pablo Fulfills Our Collective Cowboy Fantasies
The second group date is definitely my favorite of the season. Zak W., Bryden, Dan, James and Juan Pablo join Des for a day of cowboy stunts and Wild West reenactments. It gives Zak W. lots of time to remind everyone he's from Texas ("Yee haw!") and gives ABC plenty of opportunities to plug "The Lone Ranger," a movie which almost no one watching "The Bachelorette" wants to see. 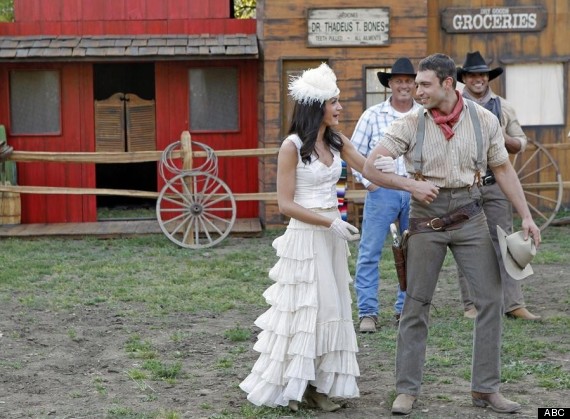 Here are some of the best moments of this date:
--Des says "Learn not to mess with a lady," after she pretends to kick a stuntman off a balcony.
--All of the dudes dress up in cowboy outfits and become infinitely more attractive.
--They compete in an acting challenge where they "draw their pistols" and "fight for justice."
--Des thinks they all did "so good" (her grammar does less well), but Juan Pablo wins the challenge and gets to see a private screening of "The Lone Ranger" with Desiree.
--Juan Pablo's win is a win for everyone. He has never been hotter and everyone watching hopes that he will never stop speaking.
--Turns out that Juan Pablo's voice is second only to his intense kissing technique. Way to be, JP.
--Post-screening, all of the men and Des drink cocktails out of Mason jars by the fire, like the hipster cowboys they are.
--Bryden and Des talk up in a tree. "When we kiss it's ... it's awesome," says Bryden, who's deep.
--Zak tells Des that she's "easy to like" and "makes things fun." He's also apparently "love drunk."
--James and Des cuddle under a blanket and are apparently "so similar!" (Unclear what these similarities are.) James reveals that his dad is sick and that he's not confident. This earns him a rose and an ego boost.

How Many Brawny Bros Can Fit In One Tiny Pool?
Chris Harrison cancels the cocktail party, but they get a pool party instead! Wooo! Bathing-suit party time! Before Des can come greet her half-naked swarm of men, Ben sneaks out and persuades her to take him and his spaghetti-strap tank top for a ride in her Bentley. He doesn't want to be put in the "dad zone." The other dudes eventually see Ben and Des making out in her car and they are NOT happy. Especially Michael, because, in case you've forgotten, he HATES Ben. In addition to Ben being cast as the (seriously tame) villain yet again...
--Dan tries to woo Des with a pizza. (Dan, I'd totally be won over by that.)
--Mikey and Michael confront Ben ... for the fourth time. "It's called 'The Bachelorette' for a reason," says Ben. "It's not called 'I'm Here To Make Friends.'" Burn.
--Brandon opens up a little too much to Des about his daddy-figure abandonment issues and his blooming love for her. Everyone watching just wants him to stop embarrassing himself.
--Somehow all the men end up in one tiny hot tub at exactly the moment Des is called away by Chris Harrison.

The Final Rose Ends In Tears
Brandon feels "really confident" and is wearing pinstripes going into the rose ceremony, which means he will certainly be eliminated. Chris Harrison reminds everyone that Brian left because he had a girlfriend and I am distracted by the mound of jewels on Desiree's neckline.
SAFE: Bryden, Juan Pablo, Zak W., Brooks, Drew, Zack K., Brad, Michael, Mikey ... and Ben. (James, Kasey and Chris got roses earlier in the episode.)
ELIMINATED: Dan and Brandon. Dan is "bummed," but Brandon is "crushed." He has such sad puppy eyes that I start to feel genuinely sorry for him, or maybe just sorry that he is saying things like "I can't even cry -- I'm just out of tears" on national TV.

LOOK: The Best Tweets About This Week's "Bachelorette"

Women Women on TV The Bachelorette