This article first appeared in part on PEN.org.

About a decade ago, PEN joined with the American Booksellers Foundation for Free Expression to support an initiative called KidSpeak, a website designed to encourage kids to debate free expression issues and, at least initially, to debate whether J.K. Rowling's Harry Potter series should be censored. The conversation had been prompted by a number of religious groups that claimed the fantasy series about young wizards promoted occultism and paganism, thereby undermining Christian values. Here is a response from Vicky, a fifth grader:

I think the Harry Potter case is just crazy. I have an idea that kids seven and under need a permission slip to see if it's okay for seven and under to read Harry Potter books. If parents of kids eight and older complain, the principal should just talk to them and tell them that it's just fantasy.

What stands out about Vicky's response, and the response from the rest of the San Francisco elementary school classroom, is not just her indignation at the idea of censoring the Potter books -- Vicky crafted a policy that would protect younger children. The discussion prompted Vicky to think about free expression and also to develop her own creative solutions to address the concerns of others who held views different from her own.

Whatever the literary merits of J.K. Rowling's Harry Potter series (critic Harold Bloom wrote that "Rowling's mind is so governed by clichés and dead metaphors that she has no other style of writing") it is the ability of the books to engage young audiences that will be their enduring legacy. Since the publication of The Sorcerer's Stone in 1997, kids have discussed, dissected and debated the books with a critical eye. Anyone who has listened to Mugglecast, a podcast for Harry Potter lovers, must acknowledge the close textual reading of every single chapter of the series, and fan fiction sites abound in an efflorescence of, albeit channeled, creativity. These books have taught children to read, to think, to write and to criticize, all hallmarks of free expression. (Harry Potter taught me how to read Portuguese. Quidditch is called quadribol; an owl is a coruja.) 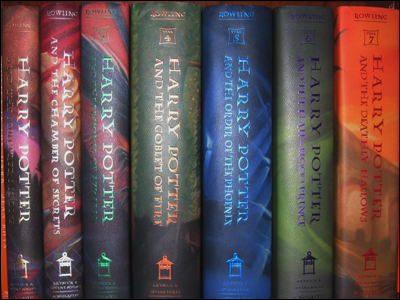 Harry Potter is now the most banned book in America, according to the American Library Association. It is undeniable that themes of death and resurrection abound in the stories, as well as detailed depictions of potions and other hocus pocus. But while there are Christians who decry the celebration of witchcraft, there are other Christians who consider Harry's journey an edifying allegory for Jesus Christ. That is another problem with banning books: it obscures the diversity of viewpoints within its potential readership. Thankfully at least 450 million copies have been sold, so there is little danger that an eager reader will not be able to drudge up a copy.

The Harry Potter empire, which includes its merchandising and film franchise, has been intimately involved with the law and copyright. J.K. Rowling has both encouraged creativity by others who are inspired by Harry Potter and asserted her lawful monopoly over her expression when it suited her. In other words, the law gives Rowling the ability to turn on and off the tap of creativity like butterbeer, subject to defenses of fair use such as parody or educational use. Fan fiction often threatens to go afoul of copyright law because fan fiction writers work with established characters and plot devices, and risk writing work that is substantially similar to the original. But Rowling recognized that fan fiction inspires children to write and also, to a certain extent, to richly imagine the Harry Potter universe and spread its gospel. She tolerated fan sites that kept voluminous records of the characters, creatures, and histories that course in and out of her books. However, she sued the publisher of the Harry Potter Lexicon, a popular online encyclopedia, when the site's editor attempted to publish a volume in print form with Michigan-based RDR Books. "It takes far too much," Rowling explained in a public statement, "and it gives far too little." The judge in the 2008 case held in Rowling's favor.

But that is about as exciting as a History of Magic class taught by the ghost of Professor Cuthbert Binns. What is more interesting, to me, is that the generation of children who learned to think critically from Harry Potter, such as Vicky, and those who learned to write, such as countless others, will soon be flooding the literary community with their creative expression. Will these burgeoning new minds lack, as A.S. Byatt has warned, "the skills to tell ersatz magic from the real thing"? Or will we be moved and inspired and frightened in ways that have never come before?

Deji Olukotun, an attorney and fiction writer, is the Ford Foundation Freedom to Write fellow at PEN American Center. His novel The Perlemoen of Obz will be published by Molossus Books in Fall 2012. You can find out more at returnofthedeji.com.