Despite the apparent proliferation of technology in the education sector, education experts often bemoan the languidness of technology insertion especially into conventional K12 classrooms. Such complaints arise from comparing education to the industrial sector. In industry, the goals and effects of technology can be measured by quantifiable metrics such as productivity and net profit. In education, there are no such metrics. Is the goal of education reaching more children and teaching more existing material, or fostering creativity and independence among them? Any teacher would answer that it must be a mix of the two, but is there a golden ratio? Given the fuzziness of this ratio, how much technology insurgence will support this ratio, and how?

Educational technology is a vast interconnected web of specialties; digital lessons, scheduling, modeling and simulations, internet enabled interactions, virtual classrooms, identity and cyber security management systems, faculty evaluation systems and data analytics must interplay. While there are numerous technology developers who cater to production of specialized digital tools for industry, the number of companies investing in educational technology is more modest. This is largely because the education sector hesitates to invest in technological innovation. For example, for every dollar spent on education in 2005, only 3.5 cents was spent on technological materials, tools and services. The excuse for such poor investment in technology has been the unwillingness or inability of schools to free up teacher time for adequate training, a time that is taken as "sunk cost". Furthermore, decision makers in education tend to view new ventures as risky, because education is time-constrained, and mistakes could be costly in terms of meeting educational milestones.

The situation has, however, improved over the years; in 2014, American K-12 schools were expected to spend $9.94 billion on educational technology. The proposed $125 million competitive-grant program by the Obama Government to promote high school redesign, with a particular focus on science, technology, engineering, and math, or STEM also bodes well for educational technology as it could somewhat mitigate the budget issues that have, in the past few years, given rise to the "Bring your own device" or BYOD system in schools.

Budgetary constraints are only one of many barriers to technology insurgence into education. The sales cycle to bring technological tools to education continues to be a daunting prospect, given the complexity and levels involved in decision making. Thus, introducing a new technology into education requires an "aye" from state policy people, academic consultants, school board members, district curriculum policymakers, special education department, office of research and assessment, the chief information officer, the director of IT and the principals and deans of schools. Paper pushing through all these levels often delays and sometimes hampers technology introduction. The average sales cycle for educational technology is, in a very optimistic estimate, about eight months to merely gain a foothold into a few schools in a district, and this rate of sales locks up capital and is not lucrative from the business standpoint.

The business of edu-tech is, however, not bleak. A recent report in EdSurgeUS states that educational technology companies raised a total of $1.36 billion in 2014. However, much of the technology and products developed went into non-K12 markets. The following figure summarizes the main markets targeted by edu-tech companies. As can be seen, many of the edu-tech companies offer educational products for children and young students for use during leisure time and not as an add-on or supplementary school curriculum. 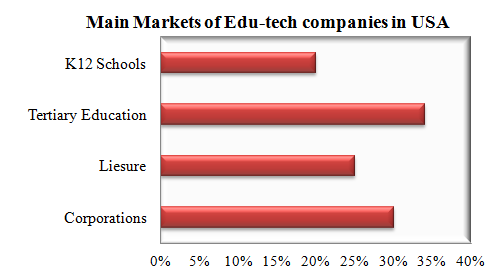 The K12 public school system is not a lucrative commercial target for edu-tech companies because it does not have the features required to attract and sustain a strong entrepreneurial activity in the tech-tool business. This is a result of poor management practices, governance and culture, as well as funding and resource allocation logics.

Teachers and instructors are often the loci of technology use in education and so, its effective blend into conventional education largely depends upon the instructors' epistemological views. Research has identified four instructor profiles that encourage or hamper the insurgence of technology in education. These classes of instructors use technology for four different goals - information transfer, application and clarification of concepts, exchange and development of ideas and for exploration and sharing, collaborative knowledge-creation, and development of process awareness and skills. As we move from information transfer to development of process awareness and skills, we see a shift from "spending on IT because parents and politicians want to see computers in the classroom" to "investing in IT" for true educational blending.

According to the NMC Horizon Report: 2014 Higher Education Edition, a serious barrier to technology in the classroom is the lack of effective training to teachers and instructors, which in turn is driven by lack of funding, low administrative support, paucity of formal digital literacy agendas, and ambiguity around the definition of digital fluency. In a Walden University-commissioned 2010 study titled Educators, Technology and 21st Century Skills: Dispelling Five Myths, 783 teachers and 274 principals or assistant principals were interviewed about the effects of technology use on student learning and skills. The study found that teacher-preparation programs did not adequately equip teachers to incorporate technology into classroom instruction.

The education sector has reached a critical point where it must accept that the way society seeks and engages with knowledge has changed in this digital era. Ignoring or resisting the insurgence of technology into the classroom may lead it down the way of the newspaper industry where many longstanding businesses failed because they ignored the influence of technology on their audiences. Thankfully, such apathy does not exist in education, even if the adoption of technology has been slow. A report by the National Education Association and the American Federation of Teachers titled "Access, Adequacy, and Equity in Education Technology,", provides the following recommendations to ease technology insurgence into K12 system: improvement of classroom access to hardware, software, and the Internet, enhancing technical support to both teachers and students, strengthening of professional development around the instructional uses of technology and enlisting teachers unions to advocate for tech funding and support.

For technology within the classroom to be effective, there must be noticeable benefits resulting from it and concerted studies are required to quantify the effects of technology on education. When it can be conclusively proven that technology within schools aids in meeting their educational objectives, it would become easier to charter effective district technology plans, budgeting and education reforms. Such educational reforms that incorporate technology as an integral part of it will require meticulous planning and long-term vision for it to sustain its impacts on education.