How does a privileged female British Citizen whose family resides in Orlando, Florida and who has no biological heritage the Dominican Republic become the Founder and Executive Director of an impact based charity initiative targeting the most impoverished communities on the island? 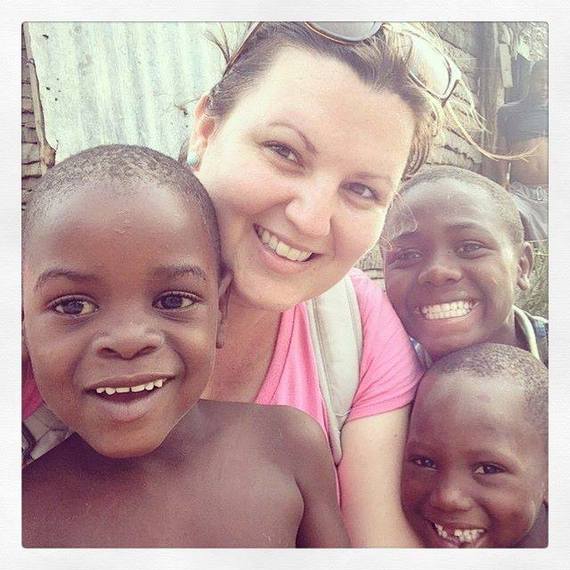 Katie with two kids from her community in the Dominican Republic; Courtesy BRP

It's so funny how our life experiences can force us to grow. When I met Katie Godkin at the Savannah College of Art and Design in 2006, she was your typical self-focused freshman party girl, with not a want in the world and an awesome GPA to back it up. Like so many, Katie probably thought she was the only person that mattered in the world. Katie and I were both architecture majors and we would often run into each other around town. We had mutual friends and over time we became good friends and I got to know a different side of Katie Godkin. She is one of those few people who find their truth early and have the courage to dedicate their life to something they fully believe in. This is Katie's inspiring life transition story.

In 2007 Katie surprised just about everyone by going on a ten-day mission trip to Mississippi to assist with relief efforts following the devastation of Hurricane Katrina. She caught herself scrubbing down homes and bathing outside in freezing temperatures pushed the princess was outside of her comfort zone.

But Katie found a sense of joy and value in the work she did so in 2008 she went back to Mississippi with her Design Studio Professor and Life Mentor Professor LaRaine Papa Montgomery, a SCAD legend. This time she was there to design transitional housing with a church community. In 2009 she went once again as a Teacher's Assistant to Professor Montgomery's studio class to inspire younger design students to give back to a community still recovering.

After graduating with her Bachelor's Degree in 2009; Katie wanted to work on a social movement project, which included travel; her first thought was Africa. She reached out to her former high school history teacher; Kathy Feliz who was working in the Dominican Republic for an initiative called Children of the Nations and asked if the organization would be interested in her design abilities. A few weeks later Katie boarded an airplane to the Dominican Republic with three teachers from Orlando, Florida to embark upon a new experience and the beginning of her Masters research.

I was so busy completing my Master's Degree I had no idea what was going on with Katie. By this time the Katie I had met and became friends with, had completely changed. She became much more aware of the rest of the world and she was keen to define her purpose in it. I was astonished to learn her graduate thesis was going to be about community design for marginalized individuals in the Dominican Republic under the guidance of Dr. Andrew Payne; he was also my Thesis Professor, one-year prior. Katie would visit her project site on every break. Her passion and enthusiasm about creating a better world for the people in the areas she worked in was both surprising and heart warming.

On completing her thesis she spent an entire year frustrated trying to find work in the US. It was the height of the recession and architecture jobs were almost non-existent. She made an emotional phone call to Prof. Montgomery to find some direction. Montgomery asked her simply "When was the last time you knew where you were going and felt happiest?" naturally Katie's response was "in the Dominican Republic" and so her life coach told her she needed to find a way to return.

Katie immediately reached out to everyone she met over the two years she had spent traveling to the country and finally found a position with an organization called Community Partners Association (COPA) as Maintenance Manager. Within a month she packed her life into two suitcases, sold her car and made her way back to the Dominican Republic to a Batey called Bombita.

I remember Katie's Facebook posts about her life in the Batey. I couldn't believe the life she chose to live. This wasn't the person I knew. Katie went from one of the nicest apartments in Savannah to living in a poverty stricken village. Humility doesn't sum it up. I'm pretty sure many people thought she was crazy when she would post her living conditions and some of her daily experiences, but she was so passionate about her work helping others, she seemed unaffected. 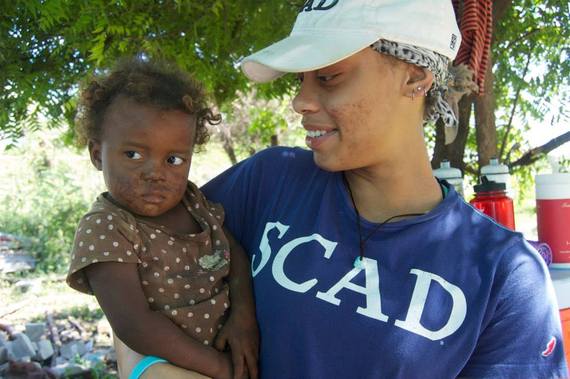 After one year Katie left the Dominican Republic, as she was offered a position within an international Architecture firm in Orlando, Florida. She felt this was her opportunity to return to her industry and start her career. With a well-paid position she felt she could continue to give back to the people she loved in the Bateyes, but no organization she could find was totally focused on community rehabilitation, building relationships and actually helping families. Her business savvy father suggested she stop trying to help through other organizations and simply start her own, based on her values. After all these were people she came to consider family, she treats the children as if they are her own and they clearly love her. In January of 2013 Katie founded the Batey Rehab Project (BRP) with her now husband Jonathan Morales Medina, who she met when on a weekend trip to Santo Domingo in 2010. Three months later in March of 2013 Katie hosted a launch event for BRP in Orlando, which raised enough money for the organization to build six homes in just five days. 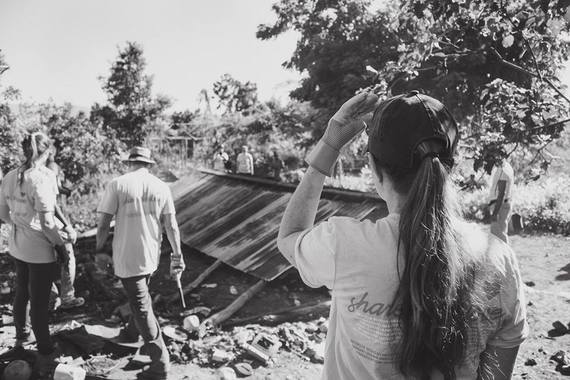 Katie endured many trials running BRP, while working endless hours in corporate, as she was laid off twice in the space of 10 months. She eventually found a position as a Marketing Manager at Magical Vacation Homes, which has since offered her stability and the flexibility she needs to run her organization.

BRP has since then the organization has built 22 homes, 5 community projects, 4 church projects and established 6 work shop projects. BRP continues to host fund-raisers and accept contributions online. The organization has also started to sell handmade jewelry from the community it supports, giving 50 percent of every sale to the craftsmen.

I was delighted to listen to a panel discussion at the recently concluded Nexus Caribbean Summit in Montego Bay Jamaica titled 'Creative Solutions and Partnerships to Enhance Social Enterprises and Disrupt the Cycle of Generational Poverty'. The panel was moderated by Debbie Farah of Bajalia International Group and featured Amanda Cole, daughter of fashion mogul Kenneth Cole and Julie Colomnbino, founder of Rebuild Globally. Amanda and Julie were talking about their collaboration project with women entrepreneurs in Haiti and it brought my mind to the work Katie is doing just across the border in the Dominican Republic. Uplifting people through skills training, entrepreneurship and market access is a much more sustainable model than the typical charity donation. By building the jewelry component BRP is shifting to a more sustainable model to ensure the long-term viability of her project and it seems to be working. Jewelry sales currently make up 22% of BRP's fund raising and men in these communities are being empowered as entrepreneurs and more so as providers.

These ladies are doing super inspiring passionate work to assist with abolishing generational poverty. I am especially impressed with the hands on approach to working with these communities. None of these initiatives take a 'talk down' approach to their beneficiaries; they go in and work directly with the people they expect to benefit.

To further expand BRP's impact, Katie reached out to the Founder and President of SCAD, Paula Wallace and shared her vision to involve SCAD students in international internships as a means of opening up their eyes to the world of poverty, their ability to be change makers and increase SCAD's global impact. Katie now makes frequent trips to the college, recruiting students to participate in 1 of 3 annual 'Venture' trips to the island, she has one of the most popular booths at SCAD's annual career fair with over 100 applicants for their upcoming Summer Venture Trip, 30 will be accepted. Students from 15 majors participate and 'crowdfund' their own trips through BRP's website. BRP ensures that every dollar is invested directly into design projects, which are all designed, built and project managed by the students. Students have the rare opportunity to gain real world, hands on experience where they can put their own designs into practice, offering invaluable preparation for the future. 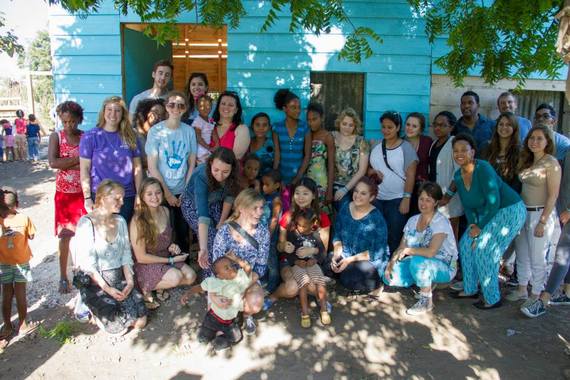 Katie's husband is from Santo Domingo and the two live and breathe the BRP brand and the values of their charity. They are fully invested in ensuring the community member's lives are enhanced and it is amazing to see the amount of love they pour into the project. They are currently making the ultimate marital sacrifice with Jonathan taking care of BRP on the ground, while Katie works on the project from Orlando, she makes frequent working trips to the Dominican Republic. Not many of us can imagine giving up so much of our life, with little person reward beyond some level of emotional gratification -- these actions are truly selfless. The two seem unflustered however and share the goal of building BRP to a point of sustainability where they will be able to begin new social projects and build many new homes. I would encourage anyone who is able to support the vision of the Batey Rehab Project to do so now by visiting www.thebateyrehabproject.org

I've been fortunate to watch Katie Godkin grow for almost a decade and to say the least I am extremely proud.