The United States and Russia announced on February 12 that they had reached an agreement for a Syria-wide "cessation of hostilities" to take effect on February 19. The announcement was met with widespread skepticism throughout the Arab world, and many politicians in Europe and the United States don't believe that the ceasefire will actually be implemented. The ceasefire only applies to the Free Syrian Army forces and will not affect the continuing battle against extremist jihadist groups like Islamic State (IS) and the al-Qaeda affiliated, al-Nusra Front.

In the meantime, Syrian armed forces, backed with Russian air power, were intensifying their ground campaign against rebel Syrian forces in Aleppo province and were threatening to encircle rebel held areas in the city of Aleppo. The threatened encirclement is only the latest chapter in the four year siege of Aleppo, a siege that in many ways has become a metaphor for the convoluted alliances and Byzantine politics that have come to characterize the Syrian Civil War.

Aleppo is the largest city in Syria and the country's financial capital. Its prewar population was around 2.5 million. Its current population is unclear. The Battle of Aleppo began on July 19, 2012, and was one of the opening chapters of the Syrian Civil War. On one side was the Free Syrian Army (FSA), various Sunni militant groups that would eventually become the Saudi backed, Islamic Front coalition, the Kurdish People's Defense Units (YPG), and assorted radical Sunni jihadist groups. Pitted against them were the Syrian Armed Forces, Hezbollah and various Shiite militias backed by Iranian advisers.

The siege of Aleppo, described in Syria as "the mother of all battles," has been a key conflict in the Syrian Civil War. Hundreds of thousands of civilians have been displaced by the fighting. Both sides have been condemned for the indiscriminate use of barrel bombs and improvised explosives that have resulted in thousands of deaths. The Old City of Aleppo, the historic center of Aleppo, which dates back to the 12th century and is a UNESCO World Heritage Site, has experienced catastrophic destruction.

The siege began when approximately 6,500 fighters, mostly drawn from the local communities, infiltrated Aleppo and seized control of the eastern portion of the city. Prominent among the rebel groups was the Free Syrian Army, a secular force made up mostly of former officers and soldiers in the Syrian Army, and the al-Tawhid group, a Qatar backed Islamist group affiliated with the Muslim Brotherhood. The latter was among the largest Islamist groups in Aleppo province. The initial success of the rebels also attracted large number of foreign fighters including Chechens, Libyans and Frenchmen of Syrian descent.

Syrian Christians and Armenians living in the city sided with the Syrian government and formed their own militias. The Kurdish People's Protection Units, affiliated with the anti-Turkish Kurdish Democratic Union Party, originally tried to stay neutral, and insisted that both sides stay out of the Kurdish areas of the city. Later they joined the rebel group fighting the pro-Assad forces. The Turkmen inhabitants also formed a 400-strong, anti-Assad, militia under their leader Sultan Abdulhamid Han.

The rebel force initially seized large portions of the city in the east and southwest. They were also able to seize the strategic town of Anadan, north of Aleppo; this gave them a direct supply route between the Turkish border and the city. During the first half of 2013, the rebel forces steadily expanded their control of the city, seizing the Great Mosque of Damascus in the heart of the old city. The mosque, which dates back to the seventh century, is considered to be the fourth holiest place in Islam. It also the site of the mausoleum containing the tomb of Saladin, and according to local lore, is supposed to be the site where Jesus will appear at the "end of days."

Over the course of 2014 and 2015, both sides launched offensives in an attempt to seize control of the rest of the city, but the situation remained largely stalemated. Beginning in the autumn of 2015, Syrian and Hezbollah fighters, backed by Russian air power, began a broad sweep south of Aleppo, which captured approximately 160 miles of territory over the month of November. By late December, forces loyal to President Assad were in control of around 75 percent of the countryside around Aleppo. Between February 1 and 4, Syrian military forces cut the FSA's supply route to Turkey and launched a new campaign to encircle rebel forces in the eastern portion of the city. In the meantime, the Kurdish YPG seized control of Menagh Air Base from groups affiliated with the Syrian rebel forces. 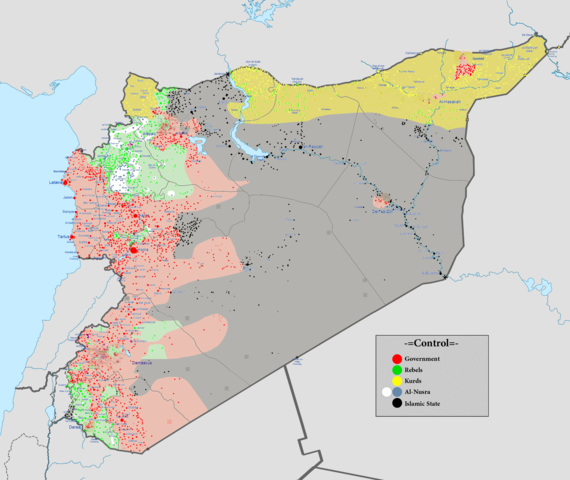 Disposition of ground forces in Syria as of February 6, 2016

The fall of Aleppo will cripple the Free Syrian Army, and the rebel groups affiliated with it, and cut it off from one of its key supply lines to Turkey. The FSA has already declared that if they are defeated at Aleppo they will "go underground" and continue their struggle as an insurgency against pro-Assad forces. In the meantime, the Russian objective of eliminating the Western backed FSA as a credible alternative to the Assad government is succeeding. Barring a dramatic reversal in the fortunes of the Syrian rebels, the choice in the Syrian Civil War is increasingly between backing either the Assad government or the al-Qaeda and Islamic State backed radical jihadist groups.

The Obama White House finds itself increasingly short of credible options in the Syrian Civil War. U.S. Secretary of State John Kerry was quick to declare that the proposed ceasefire was a major step toward a political transition that would end the civil war and allow the international community to refocus its attention on the Islamic State. He also noted that in the meantime the United States would continue its air operations against Islamic State targets.

Critics of the agreement, however, were quick to denounce the agreement as a sham; pointing out that Russian air strikes against "radical jihadist groups" in Aleppo would continue. Since the rebels in the city consist of both moderate FSA forces and various Islamist groups, from radical jihadists like the al-Qaeda affiliated al-Nusra Front to ones that would be more tolerable to the U.S. and its allies, and since the disposition of these groups in the city is relatively fluid, it would likely prove impossible to restrict attacks to only radical jihadists.

It is increasingly clear that only an armed intervention by Turkish ground forces offers any hope of maintaining the Free Syrian Army as a credible alternative to the Assad government in Damascus. In the last several weeks, Turkey has been signaling that it is prepared to intervene with ground forces into Syria. Saudi Arabia and its Gulf allies have also declared that they would be willing to commit ground troops to a Syrian intervention as well as air power.

On February 13 Saudi Arabia announced that it had reached an agreement with Turkey to base Saudi Air Force planes at Incirlik Air Base. In the meantime there have been numerous reports that Turkey has been clearing access routes through the minefields it maintains along its border with Syria.

For Turkey, a ground invasion would have a dual benefit. First it would stop the advance of Kurdish YPG forces west of the Euphrates River and their eventual linkage with Kurdish areas in western Syria. That prospect that would create a Kurdish controlled zone, what the Kurds are referring to as the autonomous region of Rojava, from Iraq to the Mediterranean coast. Secondly, it would allow Turkish forces to directly assist FSA forces in Aleppo and restore their supply lines from Turkey.

The key issue to a Turkish ground invasion will be what role the U.S. would play. Ankara appears to be reluctant to commit Turkish air forces to any ground invasion. Given the Turkish downing of a Russian jet fighter on November 24, the appearance of Turkish air forces over Syria would almost certainly precipitate a Russian response. Although there have been unconfirmed reports that Washington has agreed to provide air cover for a Turkish ground invasion, U.S. support for Kurdish YPG units has remained a contentious issue between Washington and Ankara. Turkish President Erdogan has repeatedly insisted that the U.S. must choose between supporting Turkey or the YPG. 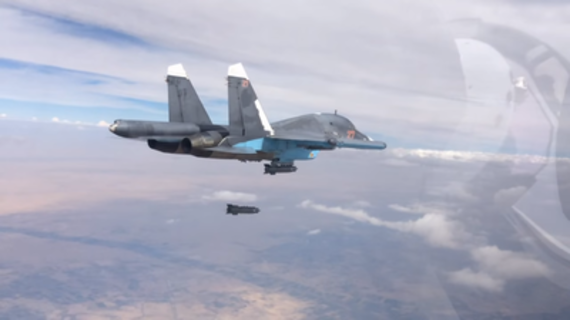 Viewed from this standpoint, it would appear that the Russian ceasefire initiative is really designed to forestall any Turkish ground invasion into Syria and to neutralize any American actions in support of it, while at the same time buying Syrian armed forces enough time to finish the encirclement of FSA troops in Aleppo. The sharply increased pace of Russian air attacks in Aleppo also suggest an ulterior motive. Russian air strikes in Aleppo have been averaging between 500 and 1,000 a day in February compared to the 20 to 30 air strikes being conducted by the U.S. against Islamic State targets.

Moreover, as one Russian general was quick to point out, unlike their American counterparts, Russian pilots drop 100 percent of their bomb loads. Repeated warnings from Russian Prime Minister Medvedev that the deployment of ground troops in Syria "would draw everybody in," and that it might lead to a "new world war," further underscores Moscow's objective to forestall any ground invasion.

Simply put, the so-called Syrian ceasefire is a sham. Contrary to the White House's announcement, it is not a first step towards a negotiated peace in the Syrian Civil War but rather a Russian attempt to forestall any intervention in support of the FSA in Aleppo until Syrian military forces can surround and defeat them. It is just the most recent example of how Vladimir Putin's Russia continues to diplomatically out maneuver the Obama Administration over Syria. In the meantime, Moscow is rapidly transforming the "reality" of the Syrian Civil War to suit its own purposes and ensure that its client Bashar al-Assad remains in power.