On May 15, within weeks of the Iraqi government's recapture of the city of Tikrit from Islamic State militants, IS forces overran Iraqi government troops defending the city center of Ramadi. By May 20, they had seized full control of the city. Ramadi is the provincial capital of Anbar province and, with a prewar population of approximately 200,000 people, the largest city in the region. Anbar in turn is Iraq's largest province, stretching across the Syrian Desert from the frontier with Syria to the edge of Baghdad and includes a significant portion of the Euphrates valley. The province covers almost a quarter of the country and is an integral part of the "Sunni Triangle" of Iraq. It is only 70 miles from Ramadi to the center of Baghdad.

Within days of the fall of Ramadi, the Baghdad government announced that it was mounting an attack to retake Ramadi and that it was confident that Ramadi would be back in Iraqi hands within "a matter of days." Three months later, Ramadi is still controlled by Islamic State. Despite continued claims that "the liberation of Ramadi City has become very close," most recently on September 1, by Faleh al-Issawi, Deputy Chairman of the Anbar Provincial Council, there is little evidence that Ramadi will change hands anytime soon.

There are two military theaters of operation in Iraq, the Euphrates Front that follows the Euphrates River valley which runs northeast, from Central Iraq across Anbar province into Syria, and the Tigris front which runs roughly due north from central Iraq towards Mosul and turns northwest into Turkey. Virtually all of Iraq's major cities and towns are in one of these two river valleys. Over the course of the past year it has become clear that the Iraqi government, even with the help of the Shiite militias and Iranian support, lacks the ability to conduct simultaneous offensive on both fronts. Military operations on one front invariably precipitate Islamic State attacks on the other front. This typically forces a redeployment of troops in response and a delay in the planned campaign.

Tikrit lies about 132 miles southeast of Mosul. Following the successful recapture of the city, the Baghdad government had to decide whether to continue advancing along the Tigris front. Had it done so, its next major objective would have been to secure the city of Bajii and after that Mosul. Although Bajii has been nominally in the Iraqi government's control, the outlying areas has frequently shifted between Islamic State and Baghdad. The refinery in Bajii, Iraq's largest, has been subject to repeated attacks by IS militants and has from time-to-time been held by them. As of September 4, the seesaw battle between Islamic State and the Iraq government for control of Bajii was continuing with a clear winner yet to emerge.

The fall of Ramadi, however, forced Baghdad to concentrate its efforts on the Euphrates Front. From a tactical standpoint this choice made a lot of sense. Control of Anbar would all but cut off Islamic State militants in Iraq from their counterparts in Syria. It would secure the border crossings with Jordan and strip Islamic State of a significant chunk of its territorial domain. The latter, was mostly Syrian Desert and of little practical use but it would have represented an important "symbolic victory," tangible proof that the Islamic State was being rolled back by Iraqi forces.

To retake Ramadi, Baghdad assembled a force consisting of 25,000 men from the Shiite militias, an unspecified number of Iraqi Army troops, and, it claimed, some 10,000 Sunni militiamen. The plan was to advance south-south west from Salahuddin province in order to cut off IS militant in Ramadi from their supply lines to the west and isolate the city. The advance would also have better secured the defense of the Habbaniyah Air Base to the east of Ramadi. American military advisers are currently training Iraqi troops at the base. 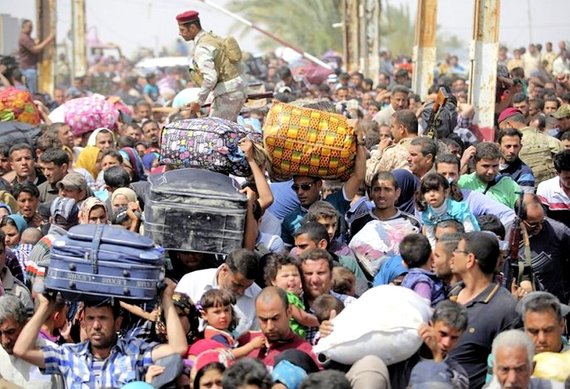 The campaign made good progress initially. By May 30, Iraqi forces seized control of Ramadi's outlying districts in the northwest of the city while additional forces seized control of much of the University of Anbar grounds to the southwest. By late June, Iraqi government forces had nominally cut off Ramadi to the west and south, however the offensive line remained porous and IS militants were able to continue to smuggle men and supplies through it. IS militants also closed the gates of the Ramadi Dam, lowering the level of the Euphrates River in order to make it easier for Islamic State jihadists to cross the river.

On July 13, Iraqi forces launched an all-out offensive from the south and west against Islamic State militants in Ramadi. The offensive was able to advance into western Ramadi and retook the Ramadi Olympic Stadium. Iraqi forces advancing from the south were able to link up with Shia militias attacking from the east to further press the advance. On July 23, Baghdad announced that the first of the new American trained Iraqi troops would also be deployed in the campaign to retake Ramadi. Little additional progress was made, however, and the offensive quickly ground to a halt. On July 30, a spokesman for the Hashid al-Shaabi announced that the focus of the Anbar campaign would shift to liberating the city of Fallujah.

In the meantime, the Battle for Ramadi grinds on. IS forces are still in firm control of the center of the city. Advancing Iraqi forces have to contend with a heavily booby-trapped urban terrain that slows their advance and reduces their maneuverability. There have been reports that IS militants have dug tunnels to the outskirts of the city allowing them to stage attacks in the rear of Iraqi troops. There were similar reports during the Battle of Tikrit, although it is unclear whether these tunnels actually exist and if so how extensive they are. The IS attacks in the rear of Iraqi forces may simply be the result of new militants infiltrating into the city or an indication of the success of IS forces in penetrating the Iraqi line. Either way, IS forces have demonstrated themselves to be masters at fighting a protracted guerilla war in an urban setting.

To point, on August 27, a suicide attack by an Islamic State militant killed Major General Abdulrahman Abu Ragheef, Deputy Head of the Anbar Operations Command. Also killed was Brigadier General Safeen Abdulmajid, Commander of the Iraqi Army's 10th Division. To add insult to injury, the explosives had been packed in an American made Humvee, one of several thousand Humvees that were seized by Islamic State militants when they routed Iraqi Army forces in the summer of 2014.

The failure to take Ramadi means that the Anbar campaign will grind on for the foreseeable future. Islamic State tactics in Ramadi, as in Tikrit, will slow down the Iraqi advance making each major city in Anbar a protracted urban struggle. IS's scorched earth tactics and the ferocity of the campaign means that each battle will leave behind an urban wasteland and tens of thousands of homeless refugees and a significant price tab for repairing the damage.

Given its pivotal role in the broader war against the Islamic State, the Anbar Campaign will remain the central focus of Iraqi's military operations for at least the balance of 2015. That means any campaign on the Tigris front to ultimately liberate Mosul will have to wait. It is hard to see how any campaign for Mosul can take place before 2016 at the earliest. Indeed, baring a significant breakthrough in the Anbar campaign, it is likely that any drive on Mosul will likely be delayed into 2017. As Mosul enters its second year under Islamic State's control there is little prospect of a reprieve anytime soon.

The ebb and flow of battle notwithstanding, there is a larger issue here. Islamic State's immediate objective is to simply survive. In those areas where Arab Sunnis are in the minority, a determined ground offensive, especially when supported by American air power, has been able to push IS forces back. In those areas where Arab Sunni's are in the majority, however, it has shown an uncanny ability to adapt and survive. A combination of local support, a continued flow of new fighters, and a determined, scorched earth urban guerilla campaign has been sufficient to blunt and slowdown the attempts of the Iraqi government to roll back the Islamic State. IS forces have shown themselves to be nimble and adaptable readily shifting from a ground force to an urban insurgency as needed or as opportunity affords.

Moreover, there is little evidence that the situation will be markedly different in the future. The Baghdad government is facing significant budgetary constraints as a result of falling oil prices and declining oil exports. In addition, public protests against what is viewed as widespread corruption in government spending is threatening the stability of the government and the tenuous coalition keeping it together. The rebuilding of the Iraqi Army by American military advisors has been a slow process and has yet to notably increase the Iraqi government's military capability. Indeed, amidst numerous reports of rampant absenteeism and lack luster participation, it is questionable if the Iraqi Army can ever be rebuilt into a credible military force.

In the meantime, Islamic State's influence around the globe continues to expand. Libya has now become an important center of IS activity in the Mediterranean. Its influence in Afghanistan is growing rapidly and it has now gained more than two dozen, "franchises," affiliated groups around the world. Regardless of its purported strength, estimated at anywhere from 30,000 fighters (CIA, US Military) to as much as 50,000 to 100,000 men (Iraqi Government and others), it continues to field an effective military force. Despite claims from the Pentagon that upwards of 10,000 IS fighters have been killed over the last year, it does not appear that these losses have diminished its effectiveness in any way.

The Battle of Ramadi, like other previous campaigns demonstrates that the campaign to roll back the Islamic State, even if it is ultimately successful, will be a long, multi-year, protracted effort. If the immediate goal of Islamic State is simply to survive, then there is little doubt that they are achieving their goal and will continue to do so for the foreseeable future. The "JV Team" has grown up fast. As of September 2015, there is little doubt they are winning the ISIS war.