U.S.
U.K. España France Ελλάδα (Greece) Italia 日本 (Japan) 한국 (Korea)
CLOSE
Coronavirus News U.S. News World News Business Environment Health Social Justice
Politics Joe Biden Congress Extremism
Entertainment Culture & Arts Media Celebrity TV & Film
Life Style & Beauty Food & Drink Parenting Travel Wellness Relationships Money Home & Living Work/Life Shopping
Communities Queer Voices Women Black Voices Latino Voices Asian Voices
Special Projects Highline
HuffPost Personal Video Horoscopes
From Our Partners Celebrate Their Crown Freedom Forever
Newsletters
International Australia Brazil Canada España France Ελλάδα (Greece) India Italia 日本 (Japan) 한국 (Korea) Quebec U.K. U.S.
Follow us
Terms | Privacy Policy
Part of HuffPost Impact. ©2021 BuzzFeed, Inc. All rights reserved.
BREAKING NEWS
Tap here to turn on desktop notifications to get the news sent straight to you.
As dawn broke in Libya on the morning of Sunday 21, August, it appeared that
the battle for control of Tripoli
was underway. Throughout the night, a steady stream of
tweets
and
retweets
emerged from Libyan sources, painting a confusing, often contradictory picture of the evolving situation.
Renesys is still piecing together the data that can confirm or deny much of what was reported through the course of the day Sunday, but one thing is clear: something very strange was going on with Tripoli residents' Internet access. Service was restored suddenly in Tripoli, flickered on and off for a couple of hours, and then died, with the majority of the country's international BGP routes withdrawn from service for good measure. By midmorning the routes were back in Tripoli, but ADSL service was still blocked.
How did we get to this point?
For several months
, our picture of the Libyan Internet has been essentally static. The Libyan national connection to the Internet consists of 16 blocks of IP addresses, each routed to the outside world through
Libyan Telecom and Technology
. That basic routing footprint has been advertised to the world, with few interruptions, since the end of the
March Internet blackout
.

Advertisement
But average people in Tripoli still haven't had much access to the Internet, because DSL services have been largely blocked for the last three to five months, depending on where you live. The few people who did retain their official Internet service continued to access Google and YouTube, as measured by Google's excellent
Transparency Report
. When LTT's international Internet connection started to show
sporadic signs of failure
a couple weeks ago, it only affected 11 of 16 blocks, leaving intact the neighborhoods who appear to have been generating the majority of the country's surviving Google traffic.
With so much of Libya's Internet disconnected in the last mile, there were few alternatives, other than outlawed
satellite phones
or
international dial-up
. These are
dangerous
, slow, expensive ways to get the news out.
Operation "Mermaid Dawn"
Advertisement
Nonetheless, it became apparent from the Libyan Twitterstream over the last couple days that
things were about to heat up in Tripoli.
It seemed likely that mobile networks, and perhaps the entire phone system, could be shut down within the capital, as the government attempted to prevent the Tripoli uprising from self-organizing. There were sporadic tweets about phone calls not completing, but the expected telecoms shutdown never came.
Instead,
Al Jazeera began to report
that Tripoli residents were receiving mobile phone text messages, urging them to take to the streets (typically, in the fog of war, it seems unclear whether they were being exhorted to support the government or the rebels). And early Sunday morning, the Twitterstream suddenly began reporting something that seemed, on the face of it, totally improbable:
the Internet had been turned back on.

Why would the government turn the Internet back on in the middle of an armed uprising? To get people to stay at home and catch up on five months of email? It seemed preposterous. But clearly, as more and more people realized, it had happened. Bandwidth was scarce, but DSL service was back. People started Skypeing with friends and relatives, some reporting hearing live gunfire in the background as their VoIP calls began to connect.

And then, as suddenly as it had come, Tripoli's Internet access stopped working again. For a total of perhaps an hour and a half of uptime, spread out in bursts between the hours of 2:00am and 4:30am, local time, the Internet had been functional again. Who was responsible? Would it come back?
Routes Withdrawn
Forty-five minutes later, at 5:14am local time, we may have received an answer of sorts. Eleven of LTT's 16 international routes to the Internet were withdrawn from the global routing table: the same eleven routes that had been sporadically unstable two weeks ago. (Note the drop at the right edge of the plot, below.) They stayed down for the next four hours, and came back up at 9:22 local time. While these routes were down, the up-or-down fate of the corresponding local DSL or Wimax services became essentially irrelevant; their plug had been pulled at the international border, and nobody in those local networks could exchange traffic with the world outside Libya, until LTT chose to reestablish routing for them.
Advertisement 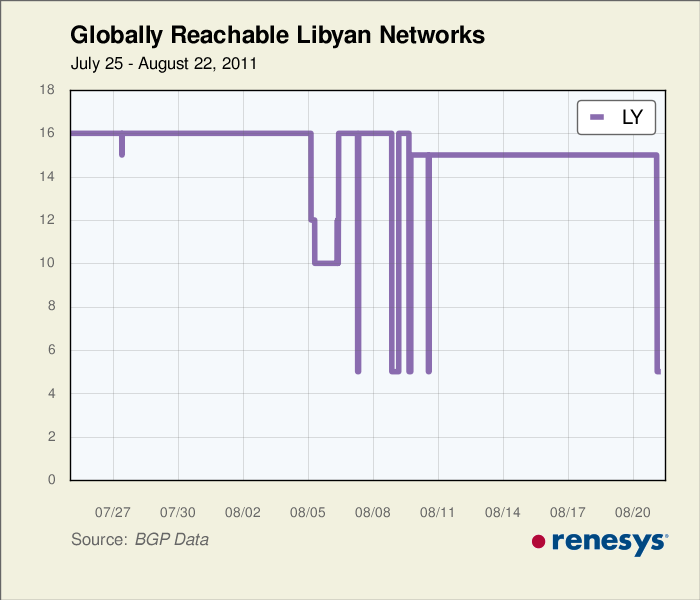 For the rest of the day, even though the routes were back in place, local Internet service appeared to be blocked again -- the status quo ante for the last five months. Until midnight Monday, we noted that
LTT's website
was still down. Did the brief Tripoli Internet flicker represent a sign of conflict within the phone company itself, with someone struggling to reactivate service at the neighborhood level, only to have it switched off again at the national level? Or was the overnight routing failure just another in a sequence of (probably power-related) outages for LTT's outlier networks? The people without Internet access in Libya have a lot of questions at this point, and we don't have enough data yet to give them a satisfactory answer.

As you can see, the LTT website (http://ltt.ly) is back online, and the Arabic crawl at the bottom says "Congratulations, Libya, on emancipation from the rule of the tyrant." We're working to verify the scope of the broad Internet reconnection that people are tweeting about, but this seems to be good evidence that LTT is in the hands of the new Libyan government. 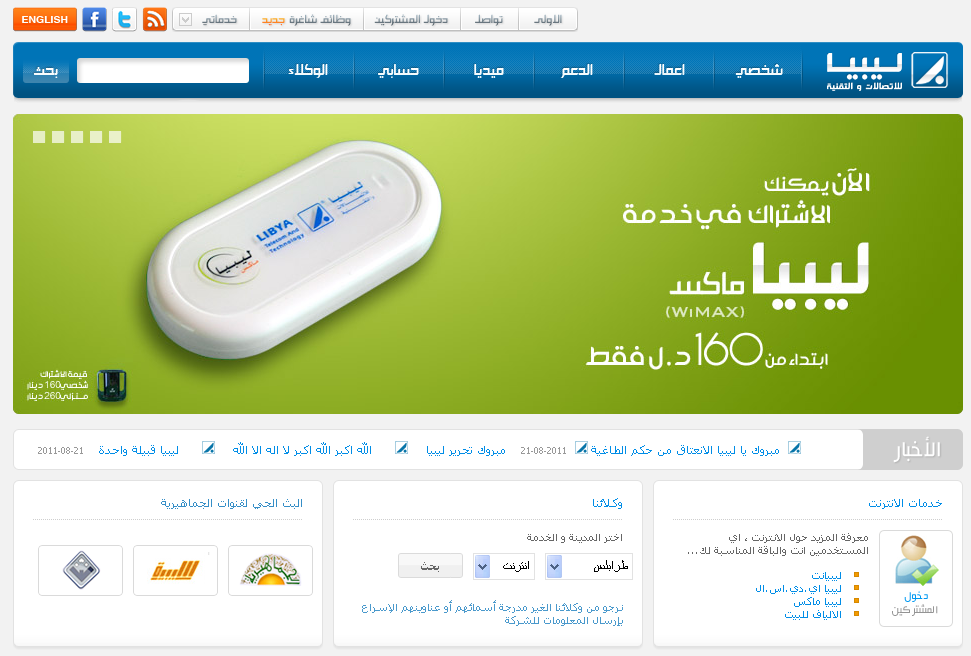 Are you an LTT customer in Libya? Let us know how the restoration of Libyan Internet connectivity and 3G mobile networks is going. Contact us with comments at the Renesys Blog.
Download
Calling all HuffPost superfans!
Sign up for membership to become a founding member and help shape HuffPost's next chapter
Join HuffPost