"They lay there, clinging to one another and trying to shield the more vulnerable parts of their bodies from the blows of the nightsticks, while the police hauled them apart and dragged them bodily into waiting patrol wagons."

Every once in a while an underdog defeats a Titan.
This isn't one of those times.

It isn't the victory of an underdog that inspires us so much as it is the incredible courage it takes to even challenge the overwhelming champion.

Sixty-two years ago the labor movement took the fight literally to capitalism's door-step in one of the most lopsided battles in history. The name of the underdog that championed the cause was Merritt David Keefe.

Keefe came from a very modest background. Too poor to finish high school, he went to work as a $15-a-week page boy on Wall Street in 1928. The stock market crash killed any hopes of a quick trip to riches.

By 1941, at the age of 32, Keefe was still only making $28 a week. He decided that his only hope of getting ahead was through a labor union. So he formed one - the United Financial Employees' Union. Amazingly he then won a contract with the Exchange.

Keefe joined the Seabees. By the time he got back at the end of the war his union was faltering badly. He immediately set to right it.

During the summer of 1946 Wall Street saw its first and only union drive.

Almost daily through the narrow streets that knife through the granite bluffs of Manhattan's financial district there are voices heard which, in a bygone day, would have grated harshly and even incomprehensibly on the ears of those who cherished the status quo.

But now Wall Street, hardened by all the manner of economic vicissitude, listens calmly to a mounting clamor of union demands and appeals for union enlistment. Each noon hour a sound truck has been drawing up in front of the Stock Exchange and throngs gather to hear labor leaders plead their cases. Around the corner on Wall Street, pickets parade, singing and waving placards.

On August 14, 1946, 700 employees, 98 percent of the workers, walked out of the New York Stock Exchange in a two hour sympathy strike for the union drive. The Exchange was taken completely by surprise - they just didn't think it would happen. It was a flexing of labor muscle that Wall Street wasn't even aware existed. 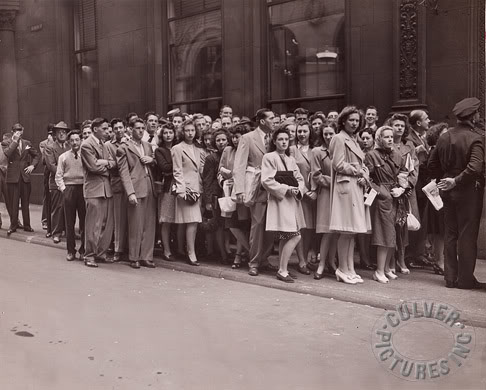 On August 20, 1946, the union drive netted its first major victory at Carl M. Loeb, Rhoades, and Company, one of Wall Street's largest brokerages. It joined Harris, Upham and Company. The UFE was being deluged by so many requests for membership that it couldn't handle the volume.

Around the same time the UFE laid down a deadline of October 15 to secure a contract with the largest brokerages. By now the union was 5,000 strong. It claimed majority membership at the New York Stock Exchange, New York Curb Exchange, New York Cotton Exchange, and five large brokerage houses. These were the ones it was targeting.

"The UFE platform calls for a general over-all minimum increase of 25 percent in the salaries of Wall Street employees; job security; benefits of a pension fund and, in addition, a bonus computed on the volume of trading.
...
When we call a strike, it will be on a scale large enough to cause a serious disruption. But we sincerely are determined to make striking a last resort."
- David Keefe, August 17, 1946

The UFE membership was overwhelmingly young and poor, and the union had limited capital resources. Many of the members worked full-time at one brokerage, and part-time at another in order to make ends meet. Few outside of Keefe had any union leadership skills. The union had no political agenda at all.
Despite these handicaps the UFE was already planning on unionizing the major banks as well.

As the October deadline approached, and no progress was made on contracts, the UFE postponed the deadline. The leadership decided that it was too weak to take on all of Wall Street right then.

As the negotiations drug on, Keefe tied up loose ends and positioned his union for the fight to come.

On November 15, the Stock Exchange agreed to renew their UFE contract. He resigned from his job at the Exchange the very same day in order to fully dedicate himself to his union. The New York Curb Exchange agreed to terms with the UFE in early December.

The following week the UFE voted to affiliate itself with the American Federal of Labor. The reasons were simple.

"We're just a bunch of white-collar guys who don't know much about picket lines. We need the help of tough guys like the seamen. They'll make the picket line stick."
- David Keefe

A one-day strike at the New York Cotton Exchange in early March raised tensions considerably. But the real source of trouble was with the brokerage firm of A. M. Kidder & Co. Because of the ability of brokerage firms to reroute their trades to other brokerage firms, shutting down a single firm was useless. Thus Keefe decided to take the fight to the Stock Exchange and shut down their trade at the source.

The problem was that this involve the Stock Exchange in a fight that wasn't their own. Stock Exchange President Emil Schram was not happy about this. Further complicating the issue was the AFL Seafarers International Union, which enthusiastically endorsed their AFL bretheren.

The strike seemed imminent until the Mayor's office involved itself.

Arbitration drug on month after month with little progress except for new efforts at organizing the banking industry. It wasn't until February of 1948 that events began to come to a head.

In the last days of February the New York Cotton Exchange caved into union demands and agreed to a closed shop. The UFE appeared strong at the moment, and the battle shifted to the Curb Exchange and the Stock Exchange, both of which refused to grant a closed shop. The contracts with these two exchanges were about to expire and the strike threat was getting stale.

On March 12 the brokerage offices of McGinnis, Bampton & Sellger were disrupted by about 30 UFE members.

"About ten minutes to 9 not less than thirty men walked into the office, pulled out the phone cords to the trading desks and pulled out the plug to the switchboard."
- Patrick McGinnis

The group was led by David Keefe who announced "this place is struck." The union denied pulling out phone cords. At issue was a Harry Horn, a trader who was fired for his union affiliation. The UFE had tried to negƒotiate the issue with McGinnis, but he had so far ignored them.

On March 29, 1948, 1,100 unionized employees of the New York Stock Exchange and the New York Curb Exchange walked out on strike. The strikers were joined by 500 white-capped members of the Seafarers Union. It was the first and only strike in the history of either Exchange. 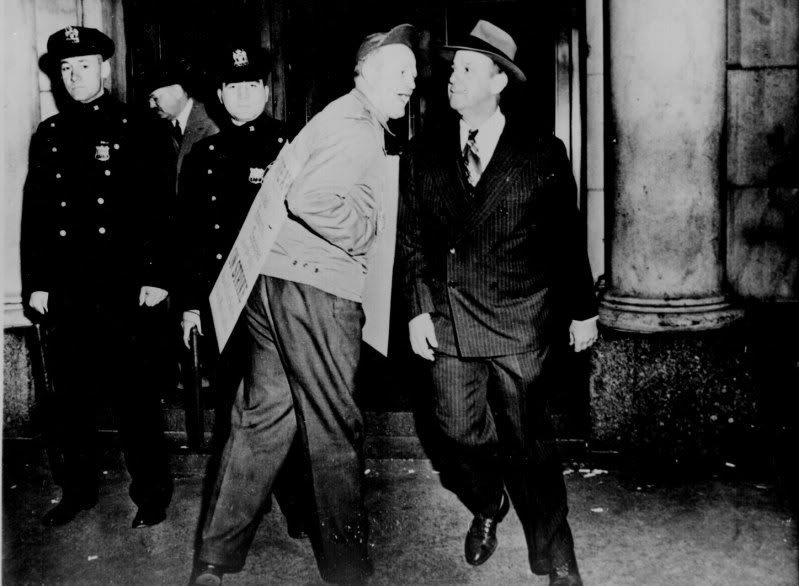 For the first time in memory, a soup kitchen was set up on the trading floor of the New York Stock Exchange. The swank Stock Exchange Luncheon club was reduced to buffet service when the cooks and waiters honored the picket line.
There was no violence on the first day. However, the same can't be said for the next day.

The trouble started when 11 picketers went to talk to the three pickets in front of the main entrance of the New York Stock Exchange just before 9 am. Four policemen approached the pickets and ordered them across the street. According to a court order picketing would be limited around the main entrance.
10 of the 11 picketers left to cross the street, but Claire Johnson, a 19 year old union secretary, refused. The police then manhandled and arrested her. 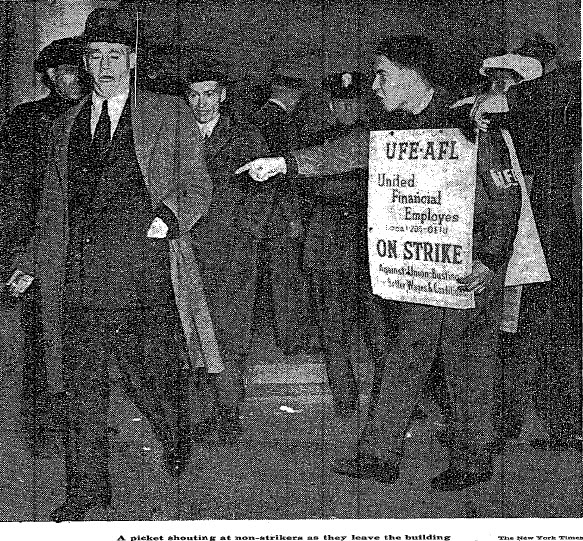 For some of the hundreds of union Seamen across the street it was more than they would tolerate. Six of them ran across the street and knocked down the policemen "in football fashion." Those six were followed by three dozen more, including several women. Around 100 policemen were in the vicinity and they rushed into action, as did hundreds of picketers.

The battle was on. 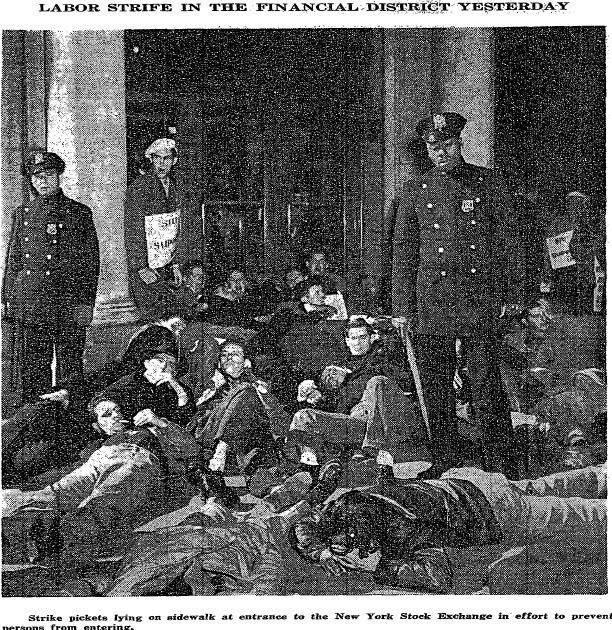 Nightsticks were wielded vigorously while newspaper photographers from nearby vantage points snapped some astonishing action pictures. Some of the picketers, almost all of whom were identified by their white caps as seamen, tried to fight back but they were quickly battered to the pavement.
- NY Times, March 30, 1948

The battle was extremely lopsided as only one side had any weapons. The picketers' tactic was to block the entrance with their bodies in the first recorded "lie-in." Lying down didn't stop the beatings.

By 9:35 it was all over. 12 picketers were hurt in the short battle, two of them hospitalized. 45 were arrested. Only two police were hurt in the melee - one of them hit by a nightstick after being mistaken for a picketer.

"Police in an earnest attempt to protect the bosses' cause all during the morning have been clubbing striking UFE members, as well as members of the SIU and SUP. Evidently, it isn't hard to figure whose side these people are on or whom they want to help."
- UFE leaflet

On April 4 the UFE had extended their picket lines to a fourth brokerage firm, the workers there walked out, but time was against them.

The UFE had few financial resources, while Wall Street had nearly unlimited financial resources. Within a week a slow trickle of workers crossing the picket lines was starting to become apparent. Inside the exchanges work was returning to normal.

On April 15, near closing time at the Stock Exchange, the number of picketers outside suddenly increased from the normal 400 or so to 2,000. The picketers closed in the building and the police sent for reinforcements.

Seven picketers made a rush towards the entrance and nearly made it into the building. Police nightsticks battled seamen fists for a few minutes. Three of the picketers got away in the confusion, but the other four were beaten down and arrested.

In the back room negotiations most of the minor issues were worked out. But two central ones remained - union shop and wages. On these two issues the Exchanges weren't willing to budge. They even refused to arbitrate. Emil Shram refused to go beyond his original offer of a $3 to $5 raise.

Shram also disclosed to stockholders that some positions of striking members had been permanently eliminated, which was another condition that the union couldn't accept.

"We have carefully considered the position of the union on all questions at issue, but in the final analysis it is the Exchange and not the union or the arbitrator which will have the responsibility for the future conduct of our business."
- Emil Shram

By this time the union had scaled back its wage demands from $9 and $15 to $6 and $10 (depending on base wage). Shram refused to budge.

On April 30, 1948, the strike ended. The strikers went back to work on the terms of management's pre-strike offer. 100 workers had no job to return to. The strike had been crushed.