Bernie Sanders has become an off camera but all-important supporting character for the drama surrounding a primary contest in southern New Jersey.

Donald Norcross, the first term Democratic US Representative for 1st Congressional District, is facing a challenge from 25 year old political newcomer Alex Law. Law is a self-described "anti-corruption Democrat for progressive policy, smarter government, and campaign finance reform" who has tied his candidacy to the Sanders campaign's message of a more liberal Democratic Party.

The two men have been fighting over the support of Sanders campaign for the past few weeks. 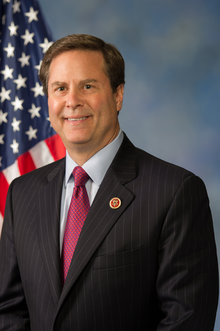 Norcross' campaign brought the primary contest some low level national notoriety last week when a campaign flyer made its way online. The mailer, which mostly refers to the candidate's positions on gun control, features a button on the bottom left touting support from both the Clinton and Sanders campaigns.

There's just one problem- the Sanders campaign has not endorsed Norcrosss.

As an anonymous source inside the New Jersey Sanders campaign put it:

"[The campaign] doesn't want to touch a lot of these races against incumbent Democrats" in a state that is about to hold a primary.

It's a solid strategic move. The Sanders campaign, which is soldiering on in a bid to influence the Democratic Party's platform at the Philadelphia Convention in late July, needs all the support it can get from party operatives to achieve its goals. Making enemies on either side of a primary in a safely Democratic district would be an error. 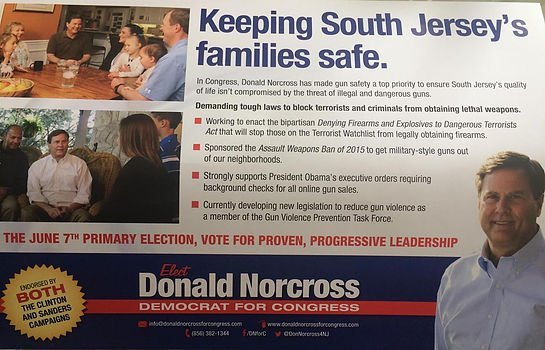 Wisniewski, a two-decade veteran of the New Jersey General Assembly (the state's House of Representatives) endorsed Norcross in January:

"I support Donald Norcross for congress," said Wisniewski. "When I was state chairman he was a Democratic National Committee member, so I had the opportunity to serve with him in a political capacity. So, certainly, he's a friend.

The endorsement was seen as a blow to Law, who had worked alongside "Wiz" for the Sanders campaign, but he appeared to take the setback in stride:

"As a progressive leader and the chair of Bernie's efforts in this state, I expected him to show his appreciation for his values....

"Despite his decision in this matter, we are both committed to working towards seeing a President Bernie Sanders. In this, I look forward to working with Assemblyman Wisniewski as we make sure New Jersey can #feelthebern."

"Donald has long been a leader on progressive issues and a fighter for all of New Jersey's working families," Wisniewski, a former chair of the state's Democratic party and current chair of the Assembly Transportation Committee, said in a statement.

"Real Bernie supporters around the state have got to be confused as to why his state chair ... would be there actively supporting someone who is the embodiment of everything Bernie is against," said Law in a statement. "Bernie supporters around the state have already been looking at [Wisniewski's hometown of] Sayerville skeptically, as Mr. Wisniewski has been unable to put together the kind of robust coordination that Bernie needs in New Jersey, and I am sure this will add to their mistrust."

This infighting all came before the mailer.

In a phone interview on May 13, Wisniewski told me that his support for Norcross was given individually in his capacity as Assemblyman, not as chair for the Sanders campaign. When I pressed him on the endorsement, which is widely understood to be the reasoning behind the button touting the Sanders campaign's support, Wiz stood firm.

For Alex Law, Norcross' use of the Sanders campaign in a re-election mailer was a bridge too far. The primary challenger has a petition on his website that calls on Sanders to clarify who, if anyone, he is endorsing in the primary.

Again, as my source in the New Jersey Sanders campaign told me, Sanders will not be endorsing either candidate.

In fairness, Norcross hasn't said that he is endorsed by the candidate himself, a point I brought up to Law when we spoke on Friday. 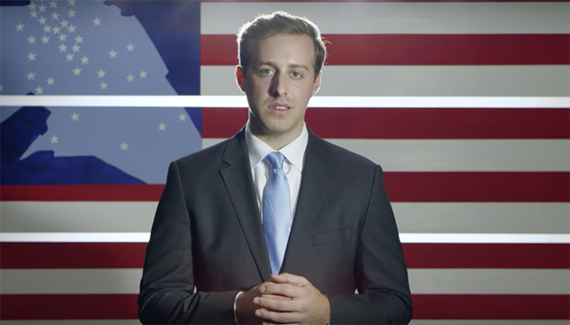 I asked Law about the discrepancy between his petition's claim that Norcross is touting Bernie Sanders' endorsement and the flyer's claim of the candidate's campaign's support. He replied that "[Norcross] says Endorsed by the Sanders Campaign, that means Bernie. Otherwise, any staffer on the campaign could issue an endorsement and you'd be able to claim that the Sanders campaign did it."

In response, I pointed out to Law that his campaign's petition could also be seen as deceptive by claiming Norcross said that he was endorsed by Sanders despite the absence of such a claim. Law replied that "To me and most people that read it, it does [say that]. Thanks for your interest in this!"

The Sanders campaign won't be endorsing either candidate in New Jersey's 1st District in the 2016 Democratic primary, but that won't stop both Law and Norcross from using the issue of the popular presidential candidate's endorsement as a campaign issue until the election.

"Law has the better claim to the endorsement; his campaign started out of a Bernie field office & most of his volunteers are former early Bernie volunteers," my Sanders campaign source said, speaking as an private Sanders supporter and New Jersey native. "We'd back people like him in races against Republicans, but not against incumbent Democrats."

The New Jersey primary will be held on June 7.

This article first appeared on my site.