Here is picture that sums up much that is wrong with American politics. Five governors of California, Democrats and Republicans, joining forces to oppose something that is indisputably in the public interest.

This is an image that could be repeated, with different faces, in region after region of our country, involving issue after issue. Public officials standing against the public good, with the disastrous results on display from Detroit to Wall Street. All suffering from the same destructive force: the power of entrenched special interests to cloud the vision of our leaders, causing them to thwart good sense, good legislation, and the will of the people. 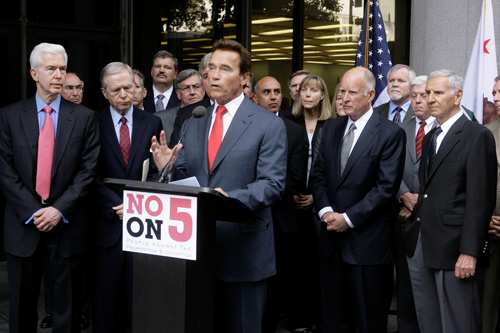 California's prisons are a budget-busting debacle. There are currently more than 170,000 inmates crammed into prisons designed to hold 100,000 people. Around 70,000 of these prisoners are nonviolent offenders, with over half of them incarcerated for a drug offense.

A large part of the problem is a parole system the New York Times recently called "perhaps the most counterproductive and ill-conceived" in the U.S.. California's recidivism rate is 70 percent -- twice the national average. This stems in no small measure from the state's insistence on treating paroled murderers the same way as paroled nonviolent drug offenders. They all spend 3-5 years on parole. This overburdens parole officers, who end up spending very little time with any of their charges -- violent or nonviolent (According to the Times, 80 percent of California parolees have fewer than two 15-minute meetings with their parole officer per month.) Wouldn't it make more sense to keep a closer watch on rapists and killers than on nonviolent drug offenders?

As a result of this dysfunctional system, prison costs have risen 50 percent since 2000, to over $10 billion a year -- close to 10% of the state's budget (and roughly the same amount California spends on higher education). It costs $46,000 a year to keep a nonviolent prisoner in the state behind bars. Is it any wonder California is gushing red ink?

Prop 5 is structured to build on the proven success of Prop 36, a law promoting drug treatment over incarceration for nonviolent drug offenders. It was approved by 61 percent of California voters in 2000, despite almost unanimous opposition from public officials. Since being enacted, Prop 36 has saved California taxpayers $2 billion -- and graduated 84,000 people who, according to studies, are far less likely to become repeat offenders.

"Prop 5 finally addresses the twin tragedy of crushing prison costs on society and the revolving trapdoor of incarceration that stems from locking up too many nonviolent offenders," filmmaker Gabriel London, who has documented the state of our prisons, told me.

Given all this, and the fact that a majority of the public favors low-cost treatment models over the high-cost incarceration model, passage of Prop 5 would seem like a no-brainer. Especially given its support from a wide-range of drug treatment professionals, good government advocates, and clearly-not-soft-on-crime law enforcement types such as former San Quentin warden Jeanne Woodford who, blogging on HuffPost, wrote of Prop 5:

Yet Prop 5 is struggling because of a very powerful special interest: the prison guards union. It has funneled $1.8 million into the campaign to derail Prop 5.

For the guards, prison overcrowding means more overtime pay. So the state's prison industrial complex has unleashed the full force of its financial power -- funding an array of ads that blatantly mischaracterize Prop 5. Truth has gone out the window, replaced by overheated claims that the initiative is a "drug dealer's bill of rights," "a get out of jail free card" for meth dealers, and a law that will allow parents to abuse their kids and escape punishment.

And, sadly, many politicians, many on the receiving end of prison guard contributions, have fallen in line. As Margaret Dooley-Sammuli, deputy campaign manager for Yes On 5, puts it: "The prison guards hold the keys to the California statehouse, so it's not a surprise that those thinking of running for governor in 2010, like Jerry Brown, Diane Feinstein, and even Meg Whitman, have come out against Prop 5." (Here's Daniel Abrahamson, co-author of Prop 5, on his dealings with Jerry Brown.)

The truly disturbing thing about their opposition to Prop 5 is that not one of them -- nor any of the governors at today's photo op -- has stepped forward with an alternate solution to the undeniable criminal justice crisis California is facing. A crisis so pressing that, if Prop 5 doesn't pass, in all likelihood the federal courts will step in. On November 17, a three-judge panel will consider putting California's entire prison system under federal control -- a move that could require the state to spend an additional $8 billion to bring the system up to constitutional standards.

So to review: Prop 5 follows a successful model, will lessen over-crowding, will save a cash-strapped state billions, will reform a "counterproductive and ill-conceived" parole system, and will shift criminal justice dollars from incarceration to treatment -- an effective approach favored by a majority of the public. Yet our leaders are opposing it, without offering any alternatives.

Don't believe the hype. Don't allow a sensible solution to be drowned by a torrent of money.

If you are in the San Francisco area, I will be speaking at the Web 2.0 Summit on Friday, November 7th.