In a time when rap luminaries‎ Kendrick Lamar and Wiz Khalifa are injecting energy into the American rap scene, other heavy hitters such as Kanye West and Rick Ross are helping to raise the profile of the urban, gritty sound of the indigenous British music genre known as grime. A few years ago, grime's advent seemed more like a moment than a movement. But Kanye's inclusion of several grime MC's onstage during his performance at the 2015 Brit Awards, the UK's equivalent of the Grammy's, and Rick Ross' recent appearance on a single entitled Gunplay with grime veterans are raising the genre's profile on both sides of the pond.

As grime continues to grow, a seismic shift is beginning to take place sending shock waves of music and lyrics at 140 beats per minute to the shores of America. Take note: the rumblings began in the underground music scene over a decade ago within the working-class 'hoods of London when garage music and MCing collided. In those days, DJ Cameo was a teenager paying his dues alongside the pioneers of the grime movement. After two decades devoted to his craft and over ten years as one of the most popular disc jockeys on the British Broadcasting Company's Radio 1Xtra, he is proud of the evolution and emergence of grime. 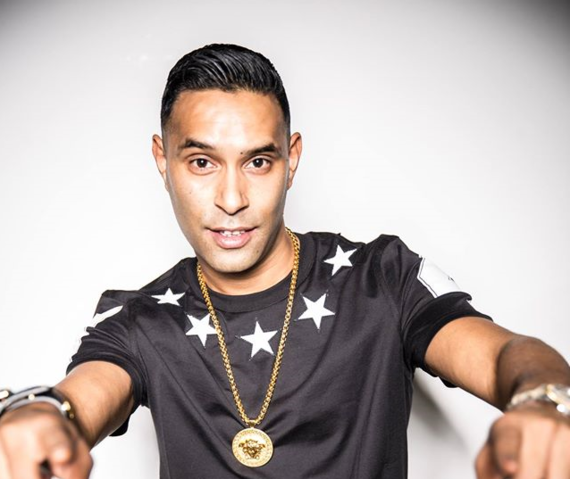 DJ Cameo has built his career and life around cultivating the growth and exposure of grime music.

The Genesis of Grime

Grime began in the early 2000's when youths in their early to late teens began to express themselves with the musical styles of garage music and rap. "The tradition in Europe is up tempo music at 130 to 170 beats per minute.‎ Grime comes from dance music that incorporated MCing," says DJ Cameo. "It's seen as youth culture." The youths who breathed life into the new genre did not have access to sophisticated equipment. Unlike the founders of rap and hip hop in America, they did not develop the distinct grime sound by sampling or cutting and scratching records. They used home computers, synthesizers, sound effects from things such as video games, and drum machines. The new, underground genre did not receive its name right away. The crudely recorded unmastered instrumentals full of bass, lyrics regarding urban life, and rapid-fire MCing helped grime to earn its name.


The diversity of the working-class neighborhoods influenced grime. "In America, there is a line between what is considered white music and black music," says DJ Cameo. "Because we all live together, our music combines the styles of the all cultures and races [we are exposed to]." Early grime artists formed crews that were essentially musical collectives of MCs, DJs, lyricists, and beat creators. Crews such as Boy Better Know, So Solid Crew, and Roll Deep would become legendary in grime circles. From the ranks of North London's Boy Better Know, siblings Skepta and JME started creating their unique musical niches in the grime game. So Solid from South London raised the bar for grime as well as hip hop artists to gain recognition and chart-topping success. Wiley, one of the most prolific artists of the genre, formed Roll Deep in East London and he literally rolled out some of the most popular grime anthems.


Similar to American musical artists who were trying to break into the industry in the 1980's and '90's, grime artists released their "tunes" as white label albums. Although the sound was inferior to digitally mastered recordings, DJs and grime fans would clamor to get albums at indie record shops in London that catered to underground music fans. DJ Cameo worked at Uptown Records, a now-defunct indie record shop in London where his manager would laugh and insult him and his friends about the grime albums but sell them anyway to fatten his wallet.

The way grime was broadcast to fans is just as much a product of the urban environment as the young people who made the music.‎ London's council estates, the equivalent of 'projects' in cities such as New York and Chicago, provided the stimulus for young musicians who needed to express themselves creatively, and arguably, therapeutically. "No legal radio station in the UK broadcast grime," says DJ Cameo. As a result, pirate radio stations for grime music were created. The height of the council towers was exactly what the grime pioneers needed for rigging radio antennas and transmitters.


DJ Cameo was one of several youths involved with pirate radio that would stop at nothing to get the music out to their peers. "After a while, the police started figuring out when and where we put the antennas and transmitters. Then they would take them down," he laughs sardonically. "We never saw our [equipment] again because the police had a storeroom somewhere full of it. It didn't matter because we would find a way to put all of it up again." Regardless of the police's diligence, the kids of pirate radio kept climbing to the rooftops of council towers using their blood, sweat, and ingenuity. "I'm telling you, there are some real geniuses in the hood, says DJ Cameo in a professorial tone. "We didn't have any training to know how to hook up antennas and transmitters."


Most of the pirate radio stations were run by London gangsters whose ethnicities were as diverse as the youths lining up to spit lyrics and spin records in some of the most dingy and cramped places imaginable. "The radio stations were on the other side of town [miles away] in some back room of a store or building. The guys who ran the radio stations would charge each kid money to come into the studio," DJ Cameo reflects. "The gangsters saw this as a good thing because they were making hundreds of pounds a week from a bunch of kids that didn't involve selling drugs or [other illicit activity]."


As grime increased in popularity on pirate radio and the clubs, eventually conflicts arose. There was resistance. The excitement, high energy and perception of aggressive black male behavior created negative perceptions about grime artists and fans. A few incidents of fighting at grime raves and police investigations caused the pirate radio station and nightclub owners who hosted grime events to call a meeting to decide the fate of grime. "They decided that grime needed to be shut down," recounts DJ Cameo. Despite their decision, the kids who invested their lives in grime kept pushing themselves and their art.

Like Lil Wayne raps in Eminem's hit No Love, the lyrics "Throw dirt on me and grow a wildflower" perfectly describes how grime grew in spite of its detractors. UK grime heads look back on debut albums like Dizzie Rascal's Boy in the Corner and Wiley's Treddin' on Thin Ice with the same reverence and nostalgia as American rap aficionados treat Nas' Illmatic and Notorious B.I.G.'s Ready to Die. Grime tunes are the soundtrack for the lives of a significant number of youths in the UK. Young people can identify with what an artist like Big Narstie, an MC who possesses Biggie's swag and Biz Markie's humor, has to say when he is spitting lyrics as well as keeping-it-real during an interview. Now Internet radio and social media are helping these UK artists to cultivate an audience in America.

Grime is still a young genre and like any creation that passes the decade mark, it is experiencing growing pains as the artists mature and the sound evolves. Most of its creators are just in their late-twenties through mid-thirties. Some of the MC's like Tempa T and Scrufizzer continue the intentions and spirit of grime originators with high-energy performances and some of the 'illest' lyrics in the game. Other artists have faced criticism when they departed from their roots to do music that had a more commercially-friendly or 'American' sound. DJ Cameo believes there are similarities between grime's emergence and how rap and hip hop progressed in America. American rap and hip hop took at least a decade and a half before the music industry recognized it as more than a passing fad created by Black, urban youth. "I believe grime is on its way to receiving that kind of respect," he says.


DJ Cameo is ready for the challenge of taking grime to the next level. When asked what he envisions for grime by the year 2020, he smiles. "Five years from now, grime needs to reflect success [just like rap and hip hop] in America," he says emphatically. "I want it to be accepted here in the UK as ethnic music."


2015 is the year DJ Cameo raised the bar for himself and he wants to move grime into a prime position in the UK and around the globe. Those are ambitious goals for someone whose early years were as bleak as the darkest lyrics written by any grime MC. That is why DJ Cameo's back story makes his passion for grime even more compelling.


Next Week: In Part II, DJ Cameo gets personal on why grime is his music, mission, and mistress.


Music is my mistress, and she plays second fiddle to no one.
―Duke Ellington