Alan Robert, bassist of the heavy-metal band Life of Agony, and author of the adult coloring book, "The Beauty of Horror: A GOREgeous Coloring Book," remembers when he knew he loved horror.

"As soon as I saw Kiss," he told me. "I lived right across the street from Evan Seinfeld of Biohazard. He literally baby-sat me when I was a kid. And our parents were close. So, when I was about 10 or 11, and he was about 14 or 15, he was really big into Kiss, and I'd go hang out at his house."

Soon, Robert and Seinfeld were donning Kiss makeup and outfits. "We'd put the Kiss makeup on and try to scare his mom. So I was influenced by the whole Kiss imagery - by Gene Simmons, specifically. Just something that attracted me," Robert explained. "I think from there, that's how I got into metal -- when the Iron Maiden covers came out -- even before I heard the music.

"I would buy the records, because I loved the artwork." 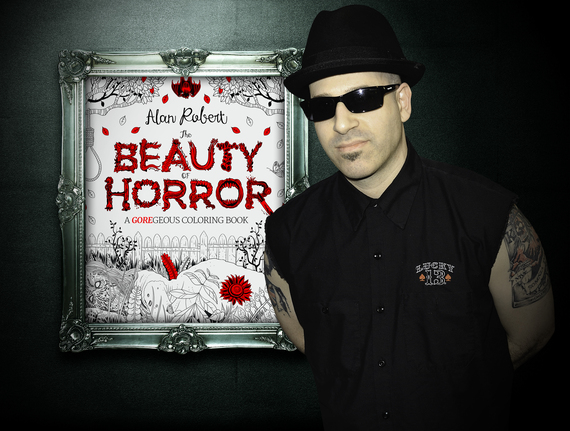 Eventually, Robert was making his own drawings. As a shy kid, Robert found that drawing was a way for him to explore emotions, such as loneliness and alienation. Research suggests that art therapy has been shown to improve psychological health, including combating depression, anxiety and low self-esteem.

Robert's art not only helped him address difficult emotions, but it also helped him connect with others.

"I started drawing as a little kid, just because it came naturally. I was just kind of a quiet kid ... more of an introvert and always in my head. And when I would draw, it would attract other kids to check it out, and I made a lot of friends that way," he recalled. "I was a little, shy kid, and it helped me be comfortable with other kids and become more open over time, because I gained confidence by my artistic skills."

Soon, Robert even figured out a way to make money on his art. "It was always monsters and disgusting things with their eyes popping out. And as a young kid, maybe 15, 16 years old, the trend back then was to paint denim jackets. And I would paint Iron Maiden's "Killers" and "Piece of Mind" on the back of my jacket. And eventually I would paint my friend's jackets, and I'd make a little side business of it," he said.

Having this social and financial success led Robert to eye a career in art, and he was able to get a scholarship at the School of Visual Arts, where he was influenced heavily by the artist Walter Simonson.

"In college, I had Walter Simonson as a teacher. He's the guy who drew 'The X Factor' and 'The Mighty Thor' for Marvel," he explained. "So, in between comic books, he'd be a professor there. And I was all ready to take my portfolio around to the comic book companies."

However, Robert's career took an unexpected detour. The band that he co-founded, Life of Agony, which included high school and SVA schoolmate Joey Zampella, Mina Caputo and Sal Abusciato, unexpectedly took off and was signed to Road Runner Records. The group's first album, "A River Runs Red," is still considered one of the best heavy-metal albums ever to come out of New York City.

"But we had this opportunity with the band to tour to support the record. And I figured this was a once-in-a-lifetime opportunity to see the world. I figured if it doesn't work out, I'll just do art," Robert said.

"And then it took off and turned into a two-decade-long career."

In many ways, Life of Agony provided a similar outlet to his art. Robert wrote many of the lyrics for their music and "that was my way of coping with my alienation," he said. "That was my release, my cathartic way to release those feelings and get those songs out. And I would feel better after I wrote those songs, and I'd be able to move on, like a diary entry."

Research supports the effect that writing songs had for Robert. Studies suggests that for those who like heavy-metal music, listening to it reduces anxiety. Also, expressing emotions through activities such as writing down one's feelings can improve mood and reduce stress responses.

And just like with his art, he felt that his music connected him to others. "I think that's why the older [Life of Agony] records connected with such a lost generation, and that's why we've been able to sustain this fan base for so long. The feedback from our fans is that the music is actually uplifting to them, because they can relate to it, and they feel comfort that they're not alone."

Despite how positive of an effect the music has had on Robert and Life of Agony's fans, the name of the band and style of music can be deceiving for some.

"I think there is a positive message even though you hear a name like 'Life of Agony,' and you tell your friends this is what you do, and they're like, 'Oh.' That is shocking to people that aren't in the scene. It's in your face for sure," he explained. "People that meet me -- I'm not this dark, depressing guy. A lot of times when I meet people, and they ask what I do, I almost give them a disclaimer.

"The band's called Life of Agony, but it's not as depressing as it sounds."

Eventually, Robert's career in metal brought him right back to art, when he met Chris Ryall of IDW Publishing, a top publisher for comic books and other art-related books.

"I still had this one character that I created in college that I wanted to see come to life. And that was the Wire Hangers series," he explained. "I started to network a little bit on Twitter, and I met this guy, Chris Ryall, from IDW, who's also a writer for comic books, and he's a big metal fan. We started to trade music for comics in the mail and became friends online. I had just put my Wire Hangers teaser video online, and he loved it. He said, 'Would you want to do it for IDW?' I couldn't believe it. I landed a publishing deal with my favorite publisher.

"That was my big break."

Robert has worked with IDW on several projects, including "Crawl To Me," "The Shunned One" and "Killogy," a dark comedy that was both a comic book and animated web series, in which he recruited several celebrities to use their likenesses and voices as characters in the series, including Frank Vincent ("Goodfellas," "Raging Bull"), Marky Ramone (The Ramones), Brea Grant ("Dexter," "Heroes") and Doyle Wolfgang von Frankenstein (The Misfits).

Robert recalled meeting Vincent. "I met him at Goodfellas restaurant in New Jersey of all places. I was late because of traffic. And I walk in, and the place is empty except for him at the end of a bar," he said.

"And I thought I was going to get whacked when I walked in."

Vincent was actually a true pro and a gentleman. "What a sweet guy ... we actually recorded the voice-over for the animation at his house. We sat down at the kitchen table with my laptop and a microphone," Robert recounted. "And he's doing the lines from the script. He's such a pro. And there's a lot of 'f-bombs' there, and every time he does a take, he apologizes to his wife, who's sitting in the next room. 'I'm sorry, honey.'"

As time went on, adult coloring books became popular -- but something was missing for Robert. "The coloring-book craze in America exploded last summer. But the majority of them are nature- and pattern-based," he explained. "People who are into coloring have been fine with coloring nature. But after a while, it gets a little boring, and they want something different.

"There's a huge void of horror in the genre of adult coloring books."

Robert's wife encouraged him to give it a try. "And then my wife says to me, 'You know, you should do one of these.' And that got the wheels turning a bit. So instead of coloring with them, I decided to make my own coloring page. I thought, this is so beautiful, I'd probably do the exact opposite. That's just how my mind works. I said, 'What's the most disgusting thing that I could think of?' It was the CBGB's bathroom," he said.

"It was the night before April Fools' Day, and it was kind of as an April Fools' joke. People loved it. They downloaded it, they colored it, it got shared hundreds of times.

Soon, Robert committed to trying to draw his own adult coloring book. But he had to branch out from the CBGB's bathroom.

"What would I draw a book on. I can't draw a bunch of disgusting bathrooms for 80 pages. What would I do?" he asked himself. "And that's when I said, 'Really, the only subject I'd be comfortable committing myself to -- because it's such a big task -- would probably be something in the horror genre. And there seemed to be a big void in the adult coloring books for horror-themed books."

He contacted IDW, and soon he embarked on creating "The Beauty of Horror: A GOREgeous Coloring Book."

"I drew one page, and that morning, I sent it over to IDW. They instantly loved it, and I got the green light to do the book. It was literally like two days," he said.

For Robert, making an adult coloring book was a very different, but very satisfying experience. In fact, just as he had experienced with his art as a child and his music, he found making a book only of drawings a very meditative and calming experience.
"In the past, drawing comic books was very different than this, because there's a lot of storytelling in comics," he explained. "It's not a luxury I would get with comics -- to get every intricate detail precise. Because I was just concentrating on the layout of that particular page and all of the lines involved to make that image over the course of 10 to 12 hours ... and losing myself in art.

"So, for me, it was really a calming experience."

Robert is thrilled with the final product. "The Beauty of Horror" was called by The Nerdist "delightfully macabre." His video teaser, "Inside the Beauty of Horror," continues to generate more and more attention for the book. "I wanted to make the ultimate horror coloring book. If there was a book that I, as a horror fan, wanted to buy, this would be it," he said.

And this is just the beginning for Robert. He is loving his artistic career and is looking forward to what the future holds.

"I've been able to do this with complete creative freedom. Usually, when you see these books, they're done by teams of people, but I'm just handing them finished books," he said. "It's basically my vision from concept to completion. And it's been very fulfilling for me."

Years later, with his art and music, Robert has been able to transform himself from a shy, isolated kid to a confident man. "I never thought I had the confidence to say, 'Yeah, I'll draw that from start to finish, and I'm going to put it out and get my own following," he said.

"And eventually I decided I do have what it takes."

Michael A. Friedman, Ph.D., is a clinical psychologist in Manhattan and a member of EHE International's Medical Advisory Board. Follow Dr. Friedman onTwitter @DrMikeFriedman and EHE @EHEintl.