I've been watching a lot of the Women's World Cup, with a fervor that surprises even me. I'm an unlikely soccer fan to begin with; sports, personally speaking, have traditionally been something to be avoided and/or feared. But after I shocked myself last summer by watching literally every single World Cup match -- including dual-screening it for games that overlapped -- I surrendered in full to the beautiful game.

Women's soccer, though? I didn't follow it. I supported it politically, of course, but it was rare to find a women's game on TV. I muddled through a couple of U.S. Women's National Team matches, but I didn't know the players, which detracted from its appeal. Knowing that the Fox networks were going to broadcast all the games of the Women's World Cup, I decided to give it a go, since the tournament would give me plenty of opportunities to become familiar with the players. I'd hoped to be as entertained as I was with the men's version last year, and I have been. What I didn't expect to be was moved.

The playing is excellent, of course; it's the best female soccer players in the world, after all. But what moves me is not a beautiful pass, or a bad refereeing call, or even the players' backstories. What moves me is the players' faces, and watching women want. It's not hard to find images of women in the public act of doing beyond what's been allotted by tired stereotypes. We see women legislating, creating, speaking, protesting -- images that weren't available just a couple of generations ago. But we still don't often see women in the act of wanting. And we need to see this, because when you're in the act of wanting something badly enough, there isn't room for self-consciousness. How you look, your stance, your hair, your makeup, whether you appear pretty, your sex appeal: all of these things that coalesce in my brain, and maybe yours, to form a hum so low and so constant that I take it as a state of being -- and when you want, they disappear. When you want, the want goes to the fore. The you can take a backseat.

What do you look like when you want? In my case, I can't really say. There are plenty of things in this world that I want, but most of my deepest desires make wanting a state, not an act: I want to do meaningful work, I want to be happy, I want to give and receive love. The closest I know to the act of wanting in the ways female athletes want is perhaps the state of flow. In those rare moments of flow, self-consciousness falls away. It's a gift when it happens. But I've never had occasion to test how far the flow state really goes in terms of lifting my own awareness of how I appear. Even when my entire being is focused on a desire, I'm probably not at risk of truly breaking any sort of code of feminine regulation. I don't really know what I look like when I'm writing, but I imagine the weirdest thing my face does is frown a lot. I probably look weirder in the context of sexual desire, but the contortions particular to the "O" face get a pass of sorts.

When I watch the athletes of this World Cup, I see an entirely different way that desire becomes focused. Specifically, I see desire become externalized. Elite athletes have spent their entire lives articulating themselves through moving their bodies. To watch them want something is an exercise in watching desire become a visual, physical force. 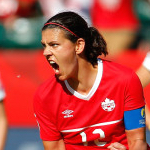 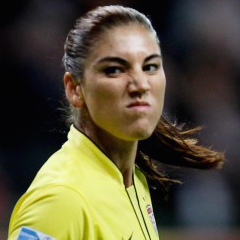 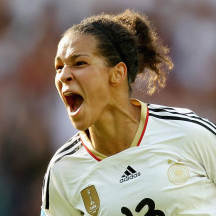 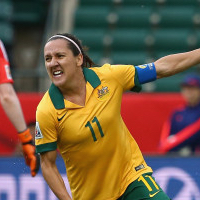 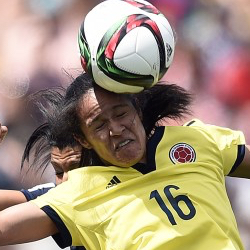 These women are not thinking about how they look, how their faces are posed, how their bodies might be viewed. The face becomes a way of communicating to teammates; the body, as they have trained it to become through thousands of hours of practice, a vehicle for winning. Certainly there are plenty of times in every woman's life when how she looks isn't at the fore of her mind, but it's rare to have proof -- visual, irrefutable proof -- that at that moment, she is absolutely not thinking about how she looks. To watch female athletes is to watch women not give a shit when they look ugly. A lifelong soccer fan recently told me he feels guilty sometimes watching women's sports because he catches himself being enthralled by their beauty, not just their skill. I told him to keep watching. Because as much as we've turned female athletes into spectacles of beauty and sexuality, the more that we watch women want in this particular way, the more we'll get used to seeing women -- beautiful women, odd-looking women, and perfectly pedestrian-looking women, and cute women and sexy women and butch women and girly-girl women -- look not-pretty, even ugly sometimes, without apology. Whatever any particular athlete might have cared about before the game (don't tell me some of those players aren't wearing eyelash extensions) doesn't matter. In the moment, she does not give a shit. There is a power in that -- a power that I find, without exaggeration, transcendental.

For about a year now, I've had a question written on the whiteboard where I keep random thoughts, blog post ideas, notes to myself, the occasional phone number. The question is, What would have gotten me into gym class as a kid? My childhood was the perfect storm for hating physical activity: I was bookish, I was fat, and I didn't like to do things I wasn't immediately good at. There's another factor that I now see loomed large in my rejection of any physical activity I wasn't pretty much forced to do: I was desperately afraid of looking stupid. When I studied theater in college, that was the note teachers and directors repeatedly gave me -- you're afraid of looking stupid -- and they were right. Save the occasional bully, nobody was telling me I looked stupid, nor was I looking at other kids on the kickball field and thinking they looked stupid when they were trying their best. What killed any curiosity I might have had about how my body moved was my own self-consciousness.

As an adult, I'm not an athlete per se -- I play one annual round of beach kadima each year and that's it -- but I shock myself with my interest in fitness that goes beyond its aesthetic rewards. I strength-train, and I train hard, and I love it, and every so often it hits me that the kid who used to play sick on track and field day now picks up heavy things of her own volition. At least a few times a month, I find myself giving a silent, spontaneous thanks that something shifted enough within me to start treating my body as a physical tool instead of just an inconvenient container for my head. What that shift tells me, though, is that there might have been something that could have flipped that switch earlier in my life.

That something, I suspect, could have been the face of Abby Wambach, or Christine Sinclair, or Wendie Renard, or any of the women whose faces have moved me in the past few weeks. I've long known the basic arguments about girls and sports: Girls who play sports have higher self-esteem, more resiliency, more leadership abilities, none of which should be surprising (it's not hard to see how focusing on what your body can do instead of what it looks like would be A Good Thing). I've also long known of the power of role models: I grew up with the gift of parents who told me I could become anything I wanted to become (a pilot! a painter! a scientist! the president!), and they did their best to point out public role models for me. Until this World Cup, though, I never thought to put them together: that having role models who spoke to my extraordinary self-consciousness could have helped me reap the benefits of sports as a girl.

The chances of me having gone on to become an actual athlete were always slim; that's not how I'm wired, and nothing would have changed that. And team sports in particular would never have been my bag, I don't think. But I wish I'd had some sort of template that could have earlier taught me the joys of inhabiting my body. I wish I'd seen more women be so focused on physical exertion that it silenced whatever hum of self-consciousness they might have had. I wish I'd had more visible proof that there were so many women out there who had the ability to not care how they looked, again and again and again, every training and scrimmage and game. I wish I'd seen more women want.

I'm in awe of the athleticism on display in the Women's World Cup. I watch the matches for the skill, the strategy, the stories. I watch them because, against all logical parts of my personal history, I somehow have come to understand why we call soccer the beautiful game. But the part I will remember is watching women want.

1 / 21
Margo Oberg
Margo Oberg is a three-time world surfing champion from the United States. She won her first world title in 1977, then won back-to-back titles in 1980 and 1981.
Facebook