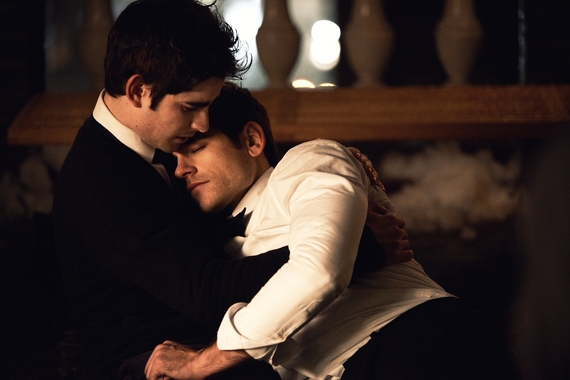 Set against the backdrop of New York City, Those People centers on shy art student Charlie (newcomer Jonathan Gordon), and his relationship with his best friend Sebastian, (Jason Ralph, SyFy's The Magicians). Though Charlie has been in love with Sebastian since childhood, Sebastian does not return his feelings. After moving into Sebastian's apartment to help him with his depression and alcohol abuse, Charlie meets Tim (Haaz Sleiman, Killing Jesus), a handsome pianist, and the two begin the delicate process of falling for one another, even though Tim is well aware of Charlie's unrequited love for Sebastian.

To be honest, I first took an interest in the film because of a bit of a crush I've developed on Jason Ralph watching him in the role of Quentin Coldwater on The Magicians. I'm not ashamed to say that I think he's probably one of the most adorable men on the planet, so I figured at the very least I'd be able to enjoy a piece of my favorite eye candy. What I didn't expect was to find the movie to be something truly magical.

From Adam Crystal's beautiful score, to Sara Shaw's skilled editing, I found myself helpless to resist the pull of the immersive world Those People took so much care to create. It's a beautifully crafted, and sometimes breathtaking, experience.

Written and directed by Joey Kuhn, the film not only tells an engaging story, but it manages to pull off an almost Herculean feat most films of the genre don't even attempt: it tells its story from the perspective of a character that I, as the viewer, can really relate to. Like Charlie, I've suffered through a case of unrequited love with a friend; and just like Charlie I self-sabotaged relationships with real potential because I couldn't let go of the slim hope that my feelings might someday be returned. "I wrote the characters based on people I knew, not based on specific actors," Kuhn says of the characters he created. "Charlie is a thinly-veiled version of myself, 5 or 6 years ago. All the characters in the group of friends are based on friends of mine. And Charlie's mom is inspired by my own mother. I find it easier to write distinct voices when I have someone I know in mind. After the first couple of drafts of the script, however, the characters become their own unique people to me. And then, once I cast an actor in a part, it becomes a mix between the character on the page and the actor's own energy.

Both of the film's lead actors portrayed their characters beautifully, and Kuhn's writing elevated the film to something quite special, allowing it to really stand out. In short, it's what I always hoped gay cinema could be, and what I was always frustrated it wasn't.

Distributed by Wolfe Video, Those People will be available on DVD and for digital download June 14th, and at $19.95, it's well worth every penny.