Along with death and taxes, another certainty in life is math. In light of this, I hope to bring new meaning to April 15 as the birthday of Leonhard Euler. Born in 1707 to a pastor and pastor's daughter in Basel, Switzerland, he was a devout Christian throughout his life, but chose the abacus over the cloth as a profession. This career would produce three of the top 5 most important equations ever, including arguably the most beautiful (according to a 1988 Mathematical Intelligencer poll), leading many to believe him to be the greatest mathematician ever. It is even more remarkable that he was able to accomplish this with impaired vision for most of his life. He began going blind in his 30's, becoming completely blind in his 50's. He actually became even more prolific after his blindness, earning comparisons to Beethoven whose deafness did not slow him.

As an artist, I draw my inspiration from many sources, from the Ethiopian Civil War to the crossing of the Rubicon, from Cezanne to Shakespeare, but given my background in mathematics, I regularly find myself exploring the lenses and tools that mathematics affords us. As one of mathematics' greatest innovators, Euler is one of these inspirations for me.

Euler's life and his contributions to mathematics have made it possible for me to explore my passions. His polyhedron formula (2=V+F-E) and Seven Bridges of Königsberg problem laid the groundwork for topology, the mathematical discipline I focused on in earning my doctorate. While he wasn't involved in finance himself, his constant, e (he actually is the only person with two numbers named after him), is the most important number in finance playing a central role in continuously compounding interest, the normal distribution, and geometric Brownian motion (the standard process for modeling stocks). This shows just how far-reaching and influential the work of such a brilliant mathematician can be. After spending years seeing the world through the lenses of mathematics and finance, and having a rare eye disease myself, it was only natural for Euler to play a meaningful role in my art.

In my artwork, I have explored Euler's identity, the Basel problem, the polyhedron formula, and the Seven Bridges of Königsberg problem, drawing upon them to analogize or wrestle with various elements of the human condition. 2overcome addresses his polyhedron formula (2=V+F-E) and struggles with blindness. If the vertices of the shapes were replaced with circles the word "overcome" would be spelled twice in braille. The formula itself applies to a large class of shapes including the ones in the piece. The moral is Euler overcame eye problems to become a brilliant mathematician. 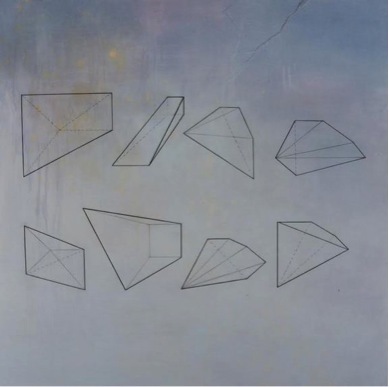 In the Original Art Basel (Miami), the solution to the Basel Problem, π^2/6, is spelled out in colorful braille-based abstraction. The area of each circle represents the value of each of the first 13 terms of the infinite series defining the problem, i.e., the area of the circles approximates the braille number they spell out. The notes scribbled throughout the piece are all relevant to the problem, and its generalization, the Zeta function (an extremely important mathematical function). 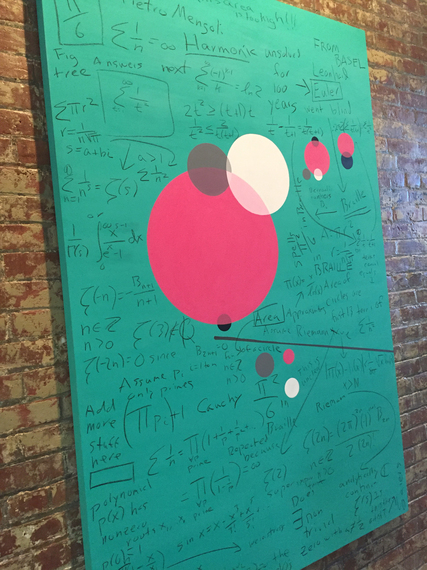 Recently I created an art series about Wall Street, using my hedge fund trading algorithm as the core aesthetic element and visual backdrop for the pieces. The process to transform the C# code into colorful shapes included e. One of the goals of this series is to show the power of math in finance and the influence brilliant theoretical mathematical minds impact our real world years later. (I also warn that finance doesn't have the certainties of math so practitioners' failure to understand the implicit assumptions in these models can have dire consequences in financials crashes.) All of these works point to the impact Euler has had on my art and me.

When looking for tools and elements to create pieces with topics as diverse as explaining the rise of Caesar, the interconnectedness of economies, the simplicity of mathematical beauty or overcoming obstacles, Euler' life and theories have been a rich source for me. So when you are drowning your tax sorrows in alcohol, don't forget to toast the great man.

Nelson Saiers has an art show titled Inside Wall Street at HG Contemporary Gallery in New York City through May 3, 2016.