The confirmation of the former president Luiz Inácio Lula da Silva as Brazil's new Chief of Staff illustrates the many ways and deviations taken by the chaotic Brazilian Republic. The most obvious and unquestionable result is: Dilma Rousseff's role as president shall be a supporting one and no longer the leading role.

Lula shall become the political articulator of a government that has mismanaged its relations with the Legislative -- mainly during Dilma's second term.

Considered the "silver bullet," Lula is identified as the only one that can pacify the allied base. After all, Dilma and the PMDB (the main allied party) have been at a sort of cold war since before the 2014 electoral campaign.

The peace agreement to ensure the re-election of the Dilma/Michel Temer ticket lasted only through February of 2015, when Eduardo Cunha (PMDB-RJ) was elected President of the Chamber of Deputies, defeating Arlindo Chinaglia (PT-SP) who was the Workers' Party candidate backed by Dilma.

Dilma was never accustomed to political nuances and in that respect Lula can contribute -- at least he may help unify the allied parties. 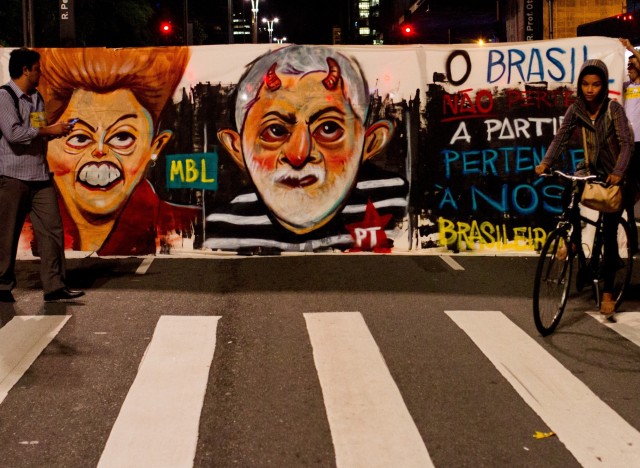 Millions of Brazilians have taken to the streets to protest the government of Dilma Rousseff and their former president Luiz Inácio Lula da Silva.

The economy of a country in recession -- the main reason behind increasing dissatisfaction among Brazilians -- will also be addressed by the former president's strategies.

Members of the Workers' Party believe that Lula will "turn the country's economy around" and change Dilma's guidelines concerning the Ministry of Finance and the Central Bank.

The former president wants to use the Central Bank's foreign-exchange reserves to cover the federal public debt. This initiative goes against the beliefs of the bank's current president, Alexandre Tombini, who defends keeping the reserve of more than $350 billion.

Such conflicting visions may lead to Tombini's fall.

Lula would also like Henrique Meirelles, former Central Bank president, to join the government. The differences between Dilma and Meirelles are notorious and the president's centralizing style never pleased the executive.

With his usual charisma, Lula is confident that he can save the government. He will have to "handle the hot potato" left by the very president he chose and helped elect.

The downcast Dilma, as we have all seen in the last few days on TV, shall give way to a decorative president.

Her appearance will certainly improve, but surely she will keep feeling uneasy about effectively losing her job.

The uneasiness makes sense as a raging opposition will try to remove Lula from office through legal procedures and accuse Dilma of being complicit with the former president's maneuver to allegedly escape the prosecution by a federal judge, as cabinet members can only be tried by the Supreme Court. However, this uneasiness may be directed solely towards Lula.

There was no need for impeachment, and no need to void the Dilma/Temer ticket at the Superior Electoral Court. Dilma didn't have to resign either.

Dilma has fallen. And Brazil's new president, for the third time, is Luiz Inácio Lula da Silva. The question is for how long.