In Modern China, the image of women is always closely related to the image of the nation. During the New Cultural Movement starting in 1915, Chinese women were viewed as essential for making China into a new and modern nation and for bringing up future-oriented Chinese citizens. One of the central tasks was to liberate the feet of Chinese women and educate them. When Chairman Mao came to power in 1949, Chinese women were modeled into the socialist ideal of being the other half of the sky who could shoulder similar responsibilities as men to build a socialist China. Strong female soldiers, peasants and workers were part of the new nation. Since the 1980s, the image of Chinese women has dramatically shifted. An ideal Chinese woman should possess not only modern knowledge and skills, but also Confucian values of deference and feminine beauty. Feminine beauty has also become a hot commodity in the Chinese market. Beautiful women have more opportunities in China and earn more money in the entertainment industry.

It is also interesting to see how Chinese women are constructed for the 2008 Olympic Games. Generally speaking, they are produced in contradictory ways. They can be symbols of traditional Chinese culture and Oriental beauty or they can symbols of sexuality and pleasure that to a large extent are emulations of the imagined West. Such contradictions also symbolize the confusion and complexities of what Chinese femininity means in a globalizing world.

One the one hand, hundreds of female volunteers will be medal presenters and attendants for officials and athletes. The medal presenters and attendants, who are called liyi xiaojie (which can be literally translated as etiquette misses), were selected based on strict criteria regarding their height, weight, age, body shape and appearance. Generally speaking, only those who conform to traditional Chinese beauty such as big eyes, oval face and light skin, are selected. The chosen few have been and are still under strict training now so that they can represent the oriental beauty. They are trained to walk and smile in a particular way. The ideal smile is for them to expose six to eight teeth. They were even asked to bite chopsticks in order to produce the perfect smile. One coach stated, "They have to represent the Oriental beauty, which is different from that of the West. While Chinese women are more reserved (hanxu), Western women are more open (kaifang)...While Western women walk very casually, Chinese women have to walk in a straight line called yi zi bu." Liyi xiaojie are also trained to show curtsey and respect to visitors. See below a picture of liyi xiaojie. 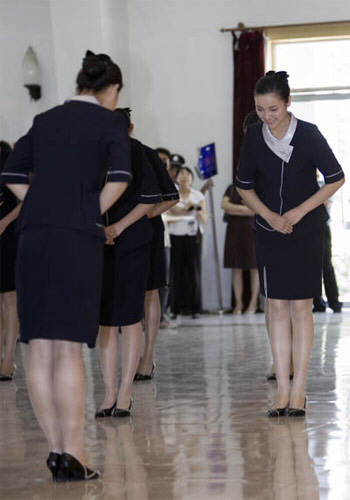 On the other hand, Chinese women have also been trained to be cheerleaders for beach volleyball, football, basketball and other sports. The cheerleaders are called baobei in Chinese, which literally means babies or babes. These babies are required to show their passion, energy and openness. For example, Chinese beach volleyball babies (shatan baobei) are demanded to wear Bikinis to dance in front of audiences. In order to show their healthiness, they have also been asked to bathe in the sun in order to get a darker skin, which goes against the Chinese notion of female beauty. Beijing learned the beach baby performances from Sydney and Athens. The beach baby culture is basically a Western import. One coach stated that Chinese cheerleaders were at first a little bit shy in dressing so little in front of audiences, but they gradually overcame their embarrassment. The coach also stated that the Chinese conservativeness is one of the disadvantages for Chinese beach babies. Many of the women are college students and there are also professional dancers. One girl stated that they understood that they were playing an important role for the beach volleyball and they were there to give the audiences, most of them Chinese, an enjoyable viewing experience. For the beach volleyball ground in Chaoyang Park, there are three Chinese teams of beach volleyball babes and an international team that consists of six Chinese dancers and six Spanish dancers. 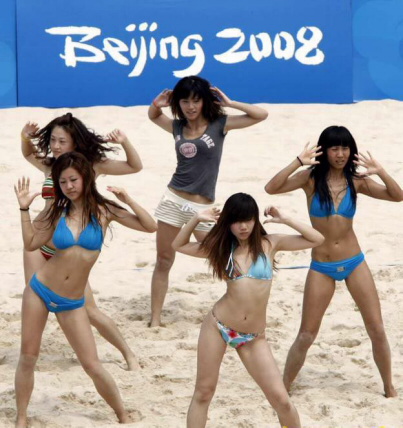