For those existing in the cultural space, art and life are intrinsically entwined. Director Madeleine Sackler brings that home in her film Dangerous Acts Starring the Unstable Elements of Belarus, recently featured as part of the HBO Documentaries series. Sackler takes us to the Eastern European nation of Belarus to document how a troupe of actors have woven the material of their lives into their repertoire -- while simultaneously committing acts of political rebellion under the watchful eyes of a despot.

I first became aware of the Belarus Free Theatre when they came to New York City to take part in the Under the Radar Festival. A glowing review in the New York Times brought them to the attention of the American theater-going public.

They have performed in 42 countries around the world, received top awards, and the support of actor Jude Law and playwright Tom Stoppard. Yet the accolades pale next to the reality of familial separation, exile, government oversight and the dire situation of homeland -- referred to as "the last dictatorship in Europe."

Sackler structures her movie on a timeline based in relationship to the 2010 December election in Belarus. The citizenry had hoped that challenges to strongman Aleksander Lukashenko and his 16 years of uninterrupted totalitarian rule would be forthcoming. Instead, what resulted was a "rigged election," violence against the populace, and retribution for the 10 candidates who dared to offer an alternative.

The film intercuts on the ground sequences of demonstrations in Minsk -- smuggled footage -- with the theatrical works created and interpreted through the artistic prism. 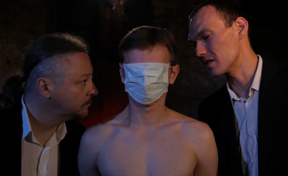 We are introduced to the close-knit group of the Belarus Free Theatre. Founded in March 2005 by husband and wife team Nicolai Khalezin and Natalia Kaliada -- then joined by Vladimir Shcherban, the three are the nucleus whose creative insights have laid the foundation for the point of view, "Theater is in the moment... conveying truths in real time."

Since the Belarus Free Theatre does not adhere to the party line, it operates outside of the state-sanctioned corridor. This means they are not registered with the government. Selling tickets is considered an "illegal economic activity," which if discovered is punishable by imprisonment. The country's KGB keeps tabs not only on the actors, but those attending performances (including journalists). As one member of the ensemble observed, "It's censorship to the point of absurdity." Yet, as they explain, "The goal is simple. To create a genuine reaction to what's happening... quickly, honestly, freely."

Subject matter for scripts is culled from topics that are deemed taboo and therefore "intentionally not discussed." This puts the collective in direct conflict with "official ideology," as it digs beneath the false national façade to examine politics, state repression, gender identity, alcoholism and suicide. Narratives frequently reflect the private experiences of the actors. What results is visceral, raw material. In Zone of Silence, a divorced father's son, regularly beaten with a belt by his stepfather, hangs himself. The grieving father takes emotional refuge in alcoholism. Personal tragedies co-exist in tandem with the national pathology -- fear that is devouring the population.

On December 19, 2010, when election results were falsified to award Lukashenko 79.67 percent of the vote, people of all ages congregated to call for change. Loudspeakers advised them to leave, as riot police dressed in black advanced behind full-body shields. Rushing the crowd, beatings with nightsticks ensued as demonstrators were dragged to waiting wagons, bloodied from the assaults. Five of the candidates, including Andrei Sannikov, were arrested. Political parties were outlawed and 1,000 people were detained. Members of the Belarus Free Theatre were summoned for questioning. Surreptitiously, they escaped the country by crossing the border on New Year's Eve.

One month, post-election, the troupe is in New York City to "draw attention to those who need attention drawn to their plight." They perform Being Harold Pinter at La MaMa. In one sequence, the actors are trapped beneath and within a sheet of plastic, searching for a way out. The plight of "tortured artistic dissidents" and their unbowed quest for freedom is symbolized. Yet, "the search for truth never stops." It is a powerful image audiences can empathize with. However, it may be impossible to fully fathom the depth of trauma in living under the boot in Belarus.

Five months, post-election, "trials" against the opposition candidates take place. Sannikov remains in prison, accused of "fomenting disorder." More accurately, he had campaigned on the platform of building "a new normal European Belarus." His wife is under house arrest. (Sannikov was released via pardon after serving 481 days in prison, frequently in solitary confinement.) Several of the actors have returned to Minsk, including single mother, Yana Rusakevich.

Nicoli and Natiala relocate to Great Britain, with their daughter, where Sannikov's sister lives and they have received political asylum. Between them, there are five criminal cases pending against them in Belarus. Nicoli would be at jeopardy for receiving up to ten years in prison; Natiala would face up to seven. When Nicoli's father dies, the pain of not being able to attend the funeral is palpable.

In England, Sannikov's sister, joined by other activists, try to build public support and awareness of the situation in Belarus. They are recorded being ignored by the majority of hurried, passing pedestrians. One man stops to listen. He reveals that he was once arrested in Prague. "Evil occurs when good people do nothing," he pronounces as he signs their petition.

Six months, post-election, the Belarus-based actors rehearse a piece. They turn their backs to the audience, to signify those who have disappeared. The blacklist has now grown to encompass those in the music field, along with other creatives.

When an economic crisis erupts, the populace is motivated to regroup. They gather to march silently. No words are used, simply clapping. Baffled authorities announce on loud speakers, "Dear Citizens, move along. Do not create clutter." Trucks arrive and the goons are sent in. People are seized, including members of the press with credentials. The footage goes black as a hand obstructs the camera lens. It is noted, "You come out -- and they take you."

Eight months, post-election, the troupe gives a world premiere. It is a depiction of the most recent demonstrations. Each time an actor is removed from the stage by authority figures, two women with large brooms sweep the floor. What appears to be a viewer is pulled onstage, and then carried off -- despite screams that she is a "journalist with accreditation."

A stark monologue examines why there has been so little outrage about the human rights violations in their country. An actress states, "Belarus is not sexy. Sexy countries have oil and gas." Enactments of the kind of torture visited upon male and female prisoners are also portrayed. It is heart stopping -- both as theater and because it is clearly a mirror of actual acts.

Sackler worked in tandem with a "state accredited" cinematographer, who was given direction via Skype, to capture much of the Belarus based material. The result was several hundred hours of uncensored footage, which was then slipped out of the country. The documentation of street protests came from a combination of filmmakers and "citizen journalists." Of primary concern was the safety of all involved with the production.

With a series of hot spots capturing the world's attention, the hardships of living under the claustrophobic and brutal Belarusian regime of death squads, disappeared persons and jailings has gone under the radar. Hopefully, this documentary will boost concern and ignite interest and support for those who are suffering.

Meanwhile, the Belarus Free Theatre will continue to push forward with their motivation to:

"Establish the truth about our lives and our society. This is our duty. Otherwise, there is no hope to restore what we have almost lost. Human dignity."