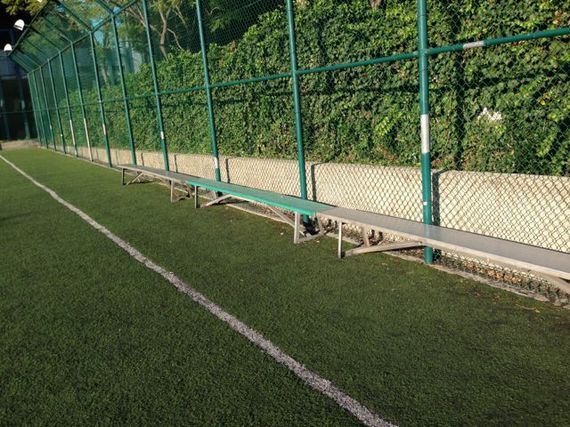 We bench warmers gotta stick together. There are so few of us left. I smile at you across the turf. You know. You get it. You nod your head and shake it twice. You remember all those guys, those millions of horrible dates, the miserable sifting through the Internet, the weddings, the baby showers, the parties, the waiting. Where is he? You keep trying out new teams, different leagues, but he's not there. It's your turn for sure.

The bench is ice cold and the red wood is scratchy and rough. Splinters poke through my shorts. I've been here for quite a while. I sit at the end and look down the line to see that it is still empty. The game is in full swing and I can faintly hear the cheering of the fans. You shift back and forth and push your hands against the wood every time the ref blows a whistle. Sometimes you get to play for five minutes just before the half, but you're ready for the real deal.

Boy, there have been a few for the record books. The guy from Match.com who said he was the best-looking guy in the room, bragged about his net worth, and wore his sunglasses indoors. I can still see the reflection of my latte in his mirrored Oakley's. The guy from OkCupid who called high as a kite and told a lengthy story of a fistfight he had in Venice playing basketball. I sat listening to his garbled tale in disbelief wondering how to get off the phone and more importantly how to block his number. There were a few teammates I ran drills with once or twice. It went ok, but we were both looking for different kinds of skills.

There was the gay guy, the guy who ended up being married, the 43-year-old waiter, and the countless chronic emailers who wrote endless hopeful love notes and then disappeared. The boring EHarmony Republican who made me sleepy and boasted of his unwavering support for Mitt Romney. I don't speak elephant. How could we be a match? We don't even play the same sport.

There have also been a few set-ups during the season. The narcissistic overweight team captain who stood me up. The starting forward who only texted after the game to get the name of a good juice cleanse shop, and the brother of the goalie who wanted to go to Jumbo's Clown Room on our first date. It was his 40th birthday and he wanted me to treat him to a cocktail and a lap dance. That was a doozy.

I decided that maybe I needed more intense training. I pumped up my drills, and started doing Indian sprints and push- ups. I searched through the deep bowels of the Internet. I felt like Rumpelstilskin sifting through the hay for that one shiny silver needle. I'm allergic to hay. It makes me sneeze, but I keep digging anyway. He's gotta be somewhere near the bottom. Don't you think?

The Coach gave me a shot during the last 15 minutes of the semis. I met the tri-athlete there. He seemed promising. He was aggressive and strategic. He was from San Diego. It sounded as exotic as Paris to me. He was sweet, told me I was cute, cooked me veggie tacos, and called when he said he would. He even held doors open. I thought, ok, maybe chivalry is not dead. The ref blew the whistle and I jogged slowly onto the field. I wasn't used to this kind of competitor. I wanted to watch him in action before I went in full force so I went to Cuba for a week to work on my skills. When I returned I got a 50-mile an hour soccer ball to the gut. I lay on the field, my chest heaving up and down. The tri-athlete had met someone. I was gone for just one week. He married her.

That ball to the gut was pretty awful, but I recovered quickly and waited patiently for the coach to give me another chance. I sifted through the Internet some more, but mostly came up with guys close to my Dad's age. I don't wanna get off this red bench for grandpa. He probably can't even remember what offsides means or last the full period.

The final away game of spring season we took a train down south. That's where I met him. We talked for four hours straight. Was it four? It seemed like two. What could I possibly have said to this perfect stranger? This had never happened before. I thought it was special. Was it the pheromones? He thought it might be the pheromones. I was sure he was my shiny silver needle. I had sifted through so many layers of hay to find him. I was almost ready to give up. We spent hours together. We told stories and laughed. The train was traveling so fast that it was hard to see where we were going, but I didn't care. We had finally reached the Championships when he yanked the brakes, creating an eight-car pile up. I got tossed out the window and rolled down a very steep hill. Above me, I could see the train smoking and mangled. I had shards of glass in my hair, and smudges of dirt across my cheeks; I even twisted my ankle. He had just got out of a relationship six weeks before meeting me. I was unexpected. He was freaked. He shut me out. Damn it. Timing.

It took me a little while to climb back up that hill. My ankle still aches a bit and every so often I find random bits of leaves and twigs in my hair. My left elbow is bruised, and from time to time I think of him. But it's the start of the fall season. I got a new pair of cleats. The spikes are nice and sharp and they are quite snug and cozy. I can run a mile in seven minutes flat and have finally perfected my penalty kick. I'm here again waiting at the end of that red bench. It's still scratchy and vacant. The opposing team's bench warmer from last season is starting today. I'm going to raise my hand real high and maybe jump up and down a little so it will be easier for you to spot me.