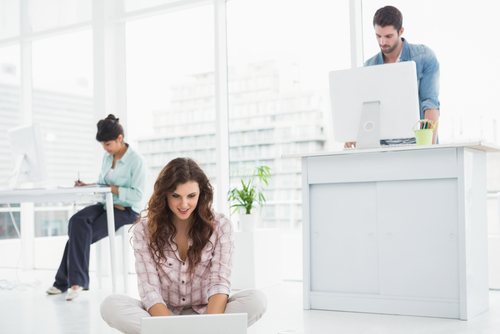 Sitting too much can kill you. It sounds dramatic, but it's true. An emerging base of research points to the detrimental effects of something that most Americans do without much thought on a daily basis (for nearly six hours per day, research finds).

Though experts are still trying to figure out exactly why, it's commonly understood that sitting for prolonged periods comes with a host of negative health effects. Whenever possible, office workers are advised to get up and take movement breaks throughout the day. It's not always easy to just walk away from the task at hand, though, so in some cases workers are combining the best of both worlds by installing standing desks.

The styles vary from stationary surface areas that look like raised tables to floating standing desks that transition from sitting to standing with a few swift movements. There are manufactured versions of standing desks, and those that workers have devised on their own. In all cases, the end goal is the same: reduce the amount of time spent sitting during the workday.

Thinking about installing a standing desk for your own office space? Take a look at some of the reasons why you should.

Leading standing desk researcher, James Levine of the Mayo Clinic, conducted a study on a group of office workers. They all added 1,000 calories to their daily intake and were asked not to change any exercise or movement habits. Some of the workers gained weight while others did not. Curious as to what was making the different, Levine and his team sewed sensors into the undergarments of the workers to track daily movement. What they found was that the group not gaining weight actually sat much less than the other workers. Even if they were just standing to stretch or walk to the bathroom, the group that did not experience weight gain sat 2.25 hours less than their peers.

Levine is quick to point out that standing is just the start. To really experience optimal health, sedentary workers must actually walk around more. But a standing desk is a start (and standing burns 50 more calories per hour than sitting anyway).

Breast cancer and colon cancer are the ones that appear most related to lack of physical activity. A study from 2011 reported that 43,000 cases of colon cancer and 49,000 cases of breast cancer annually are caused by prolonged sitting. Though the cases weren't as conclusive, the same study reported that ovarian, prostate, lung, and endometrial cancer also showed a strong connection to prolonged sitting. There is not a definitive answer as to why sitting appears to cause these types of cancer, but it's possible that increases in C-reactive protein, found in people who sit for long periods of time, is the culprit.

It makes sense that mortality may rise since sitting too much is related to cancer, obesity, heart disease, and diabetes. Consider the findings from this 2011 study: Americans increase their life expectancy two years by reducing sitting time from the standard six hours to just three hours per day, instead.

If you want to improve your posture and reduce eye strain, a standing desk is a smart option. It's important to set it up the right way, though. Your computer screen should sit just above resting eye level, so you have to look up slightly to see it. This keeps you from hunching over or slouching as you tap away on your keyboard. The simple act of standing will also improve your core strength, leading to better overall posture.

Are you inspired to take your office space to a higher level? Standing desks are beneficial for your health but there are some things to keep in mind as you make the transition.

Start slow - Don't try to go from six hours of sitting to zero overnight. As mentioned earlier, aim to sit just three of your waking hours each day. So start with just 20 minutes at a time at your standing desk, then add on time as you get used to the setup. Standing doesn't sound like a lot of work, but when your body is used to sitting most of the day, you will strain your body by standing too much, too fast.

Use a mat - Take it easy on your knees, hips, and ankles by using a gel mat where you plan to stand. Take it a step further and wear non-slip, supportive shoes, too.

Get your work done - If standing is too distracting, use your sitting times when you need that extra concentration. You may find the standing desk a little distracting at first, but you'll likely adjust and learn to refocus with time.

Set it up right - Your computer screen should sit 15 to 30 inches from your eyes, with your eye level even with (or slightly below) your screen. Keep your wrists flat and your elbows at a 90-degree angle. If you feel like any part of your body is straining while you are standing then you need to make adjustments to make it more comfortable.

Move, too - Standing does burn more calories than sitting, but to really see optimal health benefits make sure you are walking throughout the workday, too. The American Heart Association suggests 10,000 steps per day at a minimum. Buy a pedometer or a fitness tracker and add in steps where you see fit during the day. Look for creative ways to do other exercises during the workday, too, that stretch your muscles and keep your circulation and metabolism going.

Once you've mastered standing at your new desk, you may want to consider treadmill or stationary bike desks that allow you to move slowly while working. Many standing desks are modifiable to work with these movement desks, too.

Do you stand while you work? What tips would you add to this list?