In the continuing debate over access to affordable health care in the United States, it is easy to forget that such access can mean the difference between life and death. But consider the fact that every minute, at least one woman dies from complications related to pregnancy or childbirth, according to the World Health Organization.

The high incidence of maternal and infant mortality in any country is largely preventable, especially in developing countries like Peru. Pregnant women in Peru are dying because they don't receive prenatal care, they were never educated about maternal health, and if something goes wrong during pregnancy or labor, they lack access to emergency medical treatment. 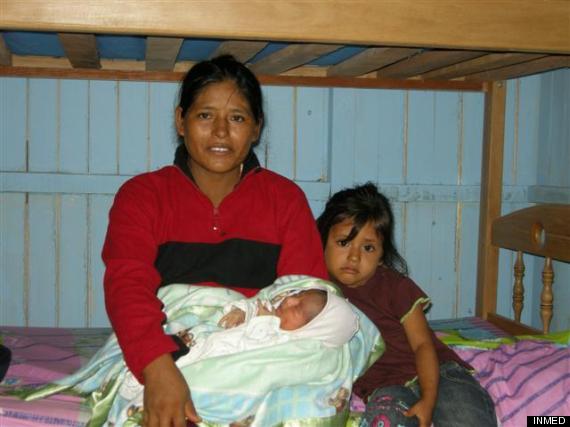 The Peruvian women who suffer most from these high mortality rates are those living in remote, indigenous communities where the nearest health facility may be up to 12 hours away over rough terrain or by riverboat. Most of these women give birth at home, so if they begin to bleed heavily or the baby is in distress, chances are the mother and/or the baby will die. For those who are able to access health care, language barriers often complicate the situation because many of these indigenous women do not speak Spanish.

When a mother dies in these poor communities, her older children often leave school to care for the younger children, making it nearly impossible for the next generation to escape the cycle of poverty.

The fact that all of this is preventable is tragic--but it also means there is hope.

In response to this issue, INMED Partnerships for Children launched the Healthy Babies program in 2006 with a grant from the United States Agency for International Development's (USAID) Child Survival program. Healthy Babies aims to save the lives of mothers and their babies in the remote Amazon jungle region of Ucayali, Peru.

In partnership with INMED's long-standing global partner Johnson & Johnson, the program has addressed the critical lack of inadequate health care by training volunteers to serve as community health workers in their own neighborhoods. These workers learn to identify danger signs during pregnancy and labor and monitor the health of newborns and infants. They also teach preventative measures like hand washing and provide information on protective factors such as breastfeeding. Complementing this training, INMED also provides easy-to-follow health education materials in the local Shipibo-Conibo language.

Since these health workers are from the same communities as the women they serve, they speak the same language and share the same customs. They respect traditional practices, such as vertical births (giving birth in a squatting, sitting or kneeling position), while dispelling dangerous myths that can lead to troublesome births or poor post-natal care. I shadowed some of the health workers and was always moved by how grateful the mothers were for the support and information they received. Most pregnant women feel somewhat apprehensive about their impending labor, but because of their remote location, I could tell these women were feeling especially vulnerable.

"In the first pregnancies I had, I wasn't aware of the risk," admits Pezo Aleli Shahuano, "but I thank God for this project because I learned a lot about the risks in pregnancy." Thanks to her community health worker, Pezo learned that her frequent headaches and dizziness could be a sign of something serious, so she sought medical attention and began having her blood pressure monitored. Now she is teaching her oldest daughter what she has learned about pregnancy and health.

As part of the Healthy Babies program, INMED has built maternity waiting homes in remote villages for pregnant women and their families to stay as the due date approaches. There, they receive qualified obstetric care and are close to medical facilities should any complications arise. As a result, many women's lives have been saved, especially those requiring immediate care after undergoing procedures like a Cesarean.

"I got pregnant as a teenager and I didn't know the risks of pregnancy," explains Alicia Vargas Rengifo. "I lived with bleeding and a urinary tract infection, but I didn't know what was happening." Alicia had assumed her symptoms were just a part of pregnancy, but learned from her community health worker that she had a severe infection that could lead to death if left untreated. For Alicia, becoming educated about these symptoms was the first step in saving her life. "With what I learned, I can teach a number of women who are pregnant."

"Now my baby is a healthy child," said Isela Range Taricuarima after she received vital education on preventive health and hygiene, prenatal care and breastfeeding.

Unlike some problems in the world, the solution to the problem of preventable maternal and infant deaths in Peru is not so complicated. INMED's Healthy Babies program has made positive changes. Want to help take these changes further? Consider volunteering with INMED Andes in Peru or visit our website to make a donation.