In the early years of the Cold War, Berlin repeatedly became the focal point of tension between the U.S. and the USSR in the struggle for supremacy in Europe. Berlin, administered by the four occupying powers, remained an escape hatch through which East Germans and others could flee to the West. In 1958, Soviet Premier Nikita Khrushchev issued an ultimatum giving the Western powers six months to agree to withdraw from Berlin and make it a demilitarized city, which would then be turned over to East Germany. The West was vehemently opposed.

The Paris Summit that was to resolve the Berlin question was cancelled in the fallout from Francis Gary Powers' failed U-2 spy flight on May 1, 1960. Khrushchev then met with newly elected President John F. Kennedy in Vienna on June 4, 1961. Kennedy, however, was criticized for undermining his own bargaining position by essentially agreeing to the permanent division of Berlin. As tensions mounted, Kennedy called for an increase in draftees and funding for bomb shelters. The Eastern Bloc responded by erecting the Berlin Wall in August. 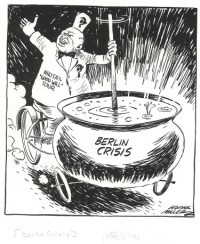 This account was compiled from an interview done by ADST in 1995 with Kempton B. Jenkins, who was posted to Embassy Moscow during this tense time and recounts Ambassador to the Soviet Union Llewellyn E. Thompson's (aka "Tommy") meetings with Soviet Foreign Minister Andrey Gromyko. Read the entire account on ADST.org. This account was edited by L. Waybright. JENKINS: I believe the confrontation in Berlin, came down to "access." So [Nikita] Khrushchev switched his target, and he insisted that we accept East German control of the access. Remember [President Eisenhower's Secretary of State, John Foster] Dulles originally had this idea that we would accept East Germans as "agents of Moscow," and legally our position would be unimpaired.

Well, this was not a legal issue, it was a psychological confrontation. And [President John] Kennedy continued to futz around the issue. But the Russians got so aggressive finally that we had to have a series of special negotiations on Berlin access...

I was "the Berlin man" in our embassy. We had these long cables come out from the Department with instructions. I would boil them down and interpret them for Tommy [Llewellyn E. Thompson]. I'd work out a talking points paper for Tommy, and then the two of us would go in and meet [Soviet Foreign Minister Andrey] Gromyko.

We had five meetings. They were all very high profile, reported in The New York Times on the front page. The first meeting we held agreed to have these consultations on Berlin access, which already made us nervous because we didn't want to consult on something which was "a right." But that's what Kennedy insisted on.

As we arrived at the first meeting, Gromyko received us in his outer office and escorted us into his little sitting room. Gromyko was extremely friendly.

"Tommy, how's Jane? How are your little girls? Is everything going well? I hope it's not too uncomfortable. It is a difficult time for us, but it has always been a great pleasure for me to work with you professionally, because you are so professional." He turned to me, and this was all in Russian even though Gromyko spoke beautiful English, and we chatted a little bit, and he complimented me on my Russian, and asked where I lived, where my apartment was, etc.

[Soviet Ambassador at Large and Counselor to the Foreign Minister Vladimir] Semyonov was also friendly. They had a translator, Victor [Sukhodrev], who had been Khrushchev's translator and subsequently became Gorbachev's translator, he attended every meeting.... He had gone to school in Washington as a boy, and had very good English.

We sat down and agreed that we would have another meeting the next week, and then we tabled our position, and they tabled theirs, we both agreed we'd study the positions and report back to our government. And we left. It was a very pleasant meeting, about 45 minutes.

The second meeting took place about a week later. We had long instructions from Washington about what to present, etc. We walked in and Gromyko was absolutely a changed personality. He was cold, hostile, and unfriendly; he abruptly told us to sit down, and then launched into a 45-minute tirade about American irresponsibility and aggression, and lack of legal basis for being in Berlin at all, and how we're going to do this, and we're going to do that.

And at one point he said, "You know, you've got to recognize that if you allow Berlin to become the flash point for a war, we will incinerate New York City in 24 hours." That's pretty heavy stuff. Tommy is sitting there on the couch, and I'm sitting on the couch next to him -- Tommy was a chain smoker, and he's smoking quietly.

Gromyko stopped. He gave this oration in a fairly high pitched voice; it was not a casual conversation. He was pounding on the coffee table. And Tommy just kept smoking, and there was silence. About 30 seconds went by, Tommy never said a word. Gromyko said, "Well, Mr. Ambassador?" 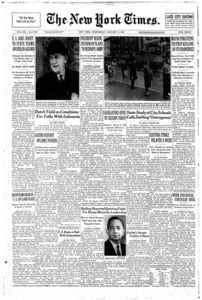 And Tommy very quietly stubbed out his cigarette, and looked up at Gromyko, and said, "Oh, are you through, Mr. Minister?" It was a beautiful deflation. And of all the things I witnessed, that was the coolest diplomatic performance I ever saw.

I was sitting there, my blood pressure was going up, of course, I didn't open my mouth but I was taking notes. In these meetings I was the scribe, everything that they said, or that we said in response, I wrote down as best I could. And because it was first spoken in Russian, and I could understand the Russian, and then repeated in English, I was able to do it because I'd catch three-fourths of it, or half of it the first time, and fill it in the second round. And when we spoke, the same thing happened. Tommy spoke slowly and deliberately, but if I missed anything I got it in a Russian translation from Sukhodrev.

Tommy sat there and waited and then said this, Gromyko's face fell. He was clearly embarrassed. And then Tommy very quietly, in about two paragraphs, said, "I deeply regret that you have been required to put on this performance, which I regard as irresponsible, undiplomatic, and certainly below your high level of diplomatic and professional behavior. You know, and I know you do, and I'm sure Mr. Khrushchev appreciates this, that if we ever get into the beginning of a nuclear exchange, that no doubt you can damage an American city or two, but you also know that the entire Soviet Union will become a rubble heap within 24 hours. It's your choice of time frame; it will take a lot less than that."

And he stood up, and we left. Gromyko's mouth was open. It was a dramatic performance. After each meeting, we would return to the residence and Tommy and I would sit down and review my notes. He was writing also on a pad, his interpretation of what was happening, and then I would review his notes. And I would make suggestions, and he would incorporate some of them, which was very heady stuff for a young diplomat, and then he would correct some of the things that I had done, or add an interpretative phrase.

I would take the notes and go back to the embassy with a driver, which was about a mile away where we had two secretaries standing by. We'd go into the bubble [a secure room built within a room, in which members of the embassy could meet to discuss sensitive issues without fear of eavesdropping] and they would type up my verbatim account of the discussion, and Tommy's interpretation.

We sent six pairs of telegrams like that in this time. It was very exciting. And one time, after the third meeting,...I came down and there was no car. I called the embassy and I couldn't get an answer, so there was no transportation. So, I took these two drafts in my pocket and I walked the one mile... 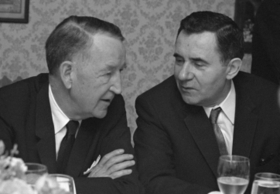 At first I was really nervous thinking, what the hell should I do and I decided, damn it, they'll follow me closely and I'm probably going to be safer making this walk than any time in my life. I got to the embassy and we typed it up, then I got in my car and came back and we sent it out. But it was that one time, I never saw anybody, a little shadow here and there, but I know as I walked those blocks that within a half a block there were probably three or four people surrounding me with a security cocoon....

In Tommy's interpretive telegram, he referred to [body language and expressions], and he characterized Gromyko's performance as theatrical, dramatic, "staged," and I think, as I recall...that it was another deliberate probe of our will, a deliberate attempt to intimidate....

The language that Gromyko delivered was reported verbatim practically. Tommy's interpretation was also reported. Now, some people in Washington would dismiss Tommy's interpretation and be paralyzed by the threat. The President, I believe, because he had developed this confidence in Tommy, and many other people, anybody who was witting and on top of it, realized that Tommy was the best interpreter that the United States had, and that his words were extremely weighty.

I think that we helped stiffen the American spine by our interpretative comments. But we knew that there were people back there saying, what are we doing in Berlin? We've got to get out of Berlin, this is crazy. We're jeopardizing the United States' security by this. Let's withdraw.

There are a lot of people going that way, and they were on both sides of the political aisle. You know, this bully is threatening me; we've got to stand up and whip him. So we always felt this was always in the balance, and the Russians clearly felt that way. They wouldn't have gone through all this if they'd known for sure it was going to be counterproductive....

Those of us who had been in Berlin always felt that World War III could start by miscalculation anywhere, but especially in Berlin. But that in terms of a calculated military engagement, there was no risk at all. Our real danger was to make sure that the Soviets didn't misinterpret our anguish, intellectual approach, and messaging as weakness. But they did frequently, as we saw.

[When we left the meeting with Gromyko], we went out the door and said, we'll report your views back to our government, we regret this was necessary, and we left.

Now, Gromyko called us in for another meeting a week later, in the meantime we had another set of instructions, of course, which were very strong. We presented our instructions. The Russians rebutted them, and we went back to another round.

We ended up with the Russians agreeing that there had to be a formulation. They essentially folded in front of our stern refusal to back down. They didn't give up their theoretical position, but in terms of practice they agreed to stop harassing our access. Basically Khrushchev backed off, and that phase of the Berlin crisis ended.