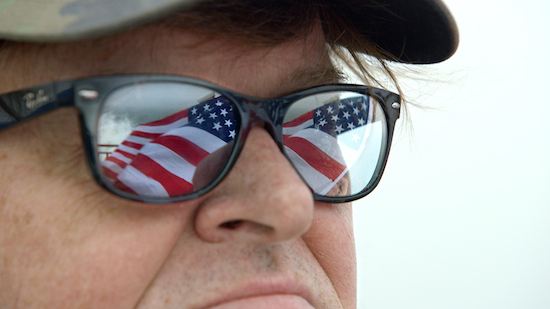 Michael Moore in Where to Invade Next, photo © Dog Eat Dog Films

I'm haunted by an idea that Algerian-French filmmaker Rachid Bouchareb put out there, during our recent interview at Berlinale. He said that peace should be a concept taught in schools: "We finally have begun to get students used to environmental causes, we teach them to be conscious about the earth, why not devote four hours a week to teaching them about peace?"

That's a pretty revolutionary concept in our society, fighting for peace. We know how to argue, how to cry -- momentarily of course -- at tragedies, we love to feel bad for the marginalized and the misplaced, but the idea to actually be kind to our neighbors and practice peace among ourselves is still an abstraction. Why? Probably because violence and controversy sell and we buy into it. 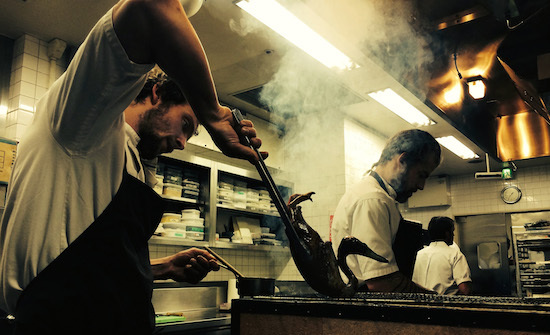 In that same vein, I was taken aback, in a good way when I watched Maurice Dekkers' Ants on a Shrimp, a culinary film about chef René Redzepi, named one of the world's most influential people by Time and helmer of World's Best Restaurant Noma in Copenhagen. The film was completely devoid of the usual kitchen muscle-flexing that TV chefs have become famous for. Gone was the typical yelling at the staff, the bleeped out curses, replaced instead by a leader who clearly led his team with strength and purpose but also negotiated his way to the perfect meal. Don't get me wrong, Redzepi is still as tough as steel, probably stronger actually than chefs who dilute their power by throwing tantrums. His team all respect him and have gladly given up all semblances of a normal life to work in his kitchen for 20 hours a day, every day. But that's what being a leader really should be about, negotiation, respect and a power so deeply felt that there is no need to show it around.

I commend filmmaker Dekkers for being able to show those qualities, which are not as easy to display cinematically as anger and abuse. But Ants on a Shrimp, in all its perfect culinary film way, shows us a different road, a way to a world that can actually exist. And maybe films can be our education, since most of us adults are no longer in school and we would not be able to attend the course Bouchareb so perfectly envisioned. 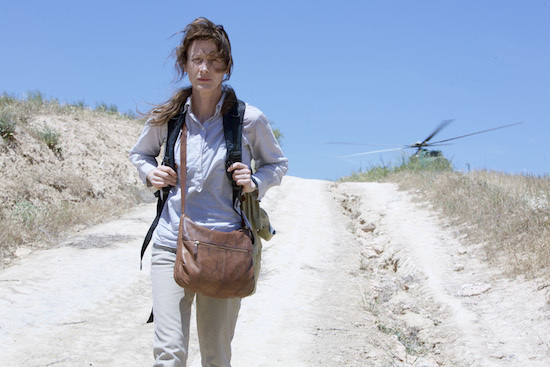 Astrid Whettnall in Road to Istanbul, photo by Hassen Brahiti © 3B Productions

In Berlinale with his own masterpiece, Road to Istanbul, Rachid Bouchareb turned out to be a wonderful interview. Usually when a translator is involved -- needed because the filmmaker is more comfortable in French and I am not -- much of what is said is lost in translation and there are a few awkward pauses. But thanks to the wonderful Anna, our conversation flowed and never missed a beat. Bouchareb's film, about a mother searching for her teenage daughter who has been lured into the seductive underworld of ISIS from the idyllic home they share in Belgium, is touching and actual. It combines the perfect blend of questions and answers, of care for his subjects and bafflement about the decisions they make and it's truly a film everyone should watch if they have questions left about who joins Daesh and why the allure is so powerful. Without thinking and moved by enthusiasm, I hugged Bouchareb on my way out of our talk and, bless him for indulging my invasion of his space, he didn't squirm away from me.

Then there was Michael Moore's Where To Invade Next which I was convinced would be a much different film, something about the US military and our invasive foreign policy. Was I in for a surprise! Moore, I should have known of course, takes his audience instead on a journey around Europe, and even ends up in Tunisia, to discover little gems of civilization that make each country better. Among his many discoveries, too many to list, from Italy he takes the concept of extended paid vacation time, from France their healthy school cafeteria eating habits, from Portugal the idea that an individual can't be jailed for personal drug use, from Germany the individual health policy that allows stressed out workers a three-week stay at the spa, as well as a 36-hour workweek enforced and from Tunisia their women's rights, which are now written in the country's 2014 constitution. Once he finds these nuggets of progress, he plants a symbolic American flag on them and brings them back to the US, to fix our own beloved but clearly broken United States.

The twist is that ultimately the answer to all our problems is right in front of our noses but you'll have to watch Moore's film to know exactly why.

On a personal note, I was sad to find out that Moore could not attend Berlinale because of health issues. He's been recovering from pneumonia and was advised by his doctors against traveling to Europe. I wish him a speedy recovery because I can't imagine a world without his funny, smart and provocatively honest voice. 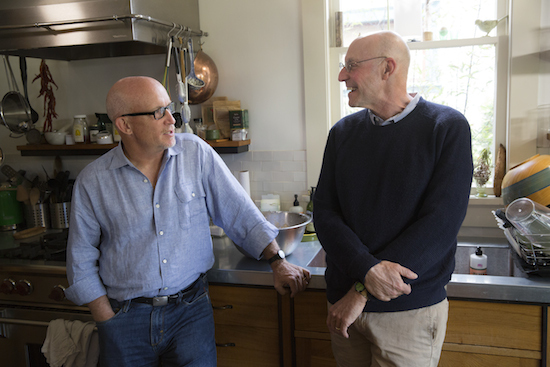 Alex Gibney and Michael Pollan behind the scenes of Cooked, photo © Karen Ballard/Netflix

Which brings me so perfectly to the next gem I discovered in Berlin, Cooked, a collaboration between Michael Pollan and Alex Gibney resulting in a fantastic four-part series shown on Netflix. We often think of food as basic sustenance, or we connect with our friends over a meal at a nice restaurant, but what if we started thinking of what we eat as our voting power, the single most important way we can change the world? Pollan, as many of us know, is a food activist, a champion of sustainable nutrition and food as a way to heal ourselves. A self described "flexitarian", meeting Pollan was important to understanding his mission and finding him paired up with master documentarian Gibney made for an ideal project. Cooked is part food journey, part educational cooking show, all wrapped up in a great filmmaking package that could change the way we look at food.

I mean, just wrap your head around the fact that most revolutions -- including the Arab Springs -- started when the price of grain went up too high, too fast. 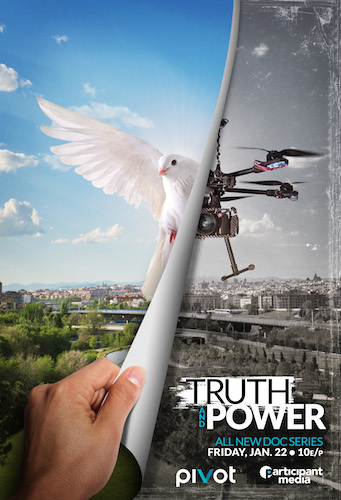 And finally, more great world-changing television, this time from Participant Media, showing on their Pivot TV. Known for their socially conscious films, Participant takes the idea one step further and with Truth and Power connects the audience with stories of ordinary people who took on extraordinary risks, to help humanity. I loved sitting down for a talk with filmmaker Brian Knappenberger, who is the executive producer of Truth and Power along with Belisa Balaban, also an EP on the series and Pivot's EVP of original programming. Our conversation flowed and it's always refreshing to meet people in the business of film and TV who care about our world. Actually, my words aren't strong enough, forget "refreshing" and try unprecedented and pioneering instead. The series is narrated by Maggie Gyllenhaal, which also makes for great entertainment but always with a whole lot of learning to go with it. Just the way I like my culture!