This article was originally published on xoJane.

As it becomes more possible that Hillary Clinton could well be our first female president, sexism in the United States is made apparent to me in ways it never was before. The majority of the men in my life -- as friends and family -- are straight, socially liberal, white males, and all say they are at least pro women's equality if they are not willing/able to identify themselves as feminists. But every straight white man I know is either supporting Bernie Sanders or Donald Trump. None are supporting Hillary. And therein lies the sexist rub:

In February of this year, feminist luminaries Gloria Steinem and Madeleine Albright were publicly shamed for asserting that young female Sanders supporters are siding with Bernie because the boys they know have sided with Bernie. Steinem and Albright were calling attention to our country's cultural history of men's opinions (you know, the ones that shape almost all our news, entertainment, and politics) influencing women's opinions, especially when women are young and have not yet "woken up" to all the ways men affect their lives much more than they themselves or any other woman does. However, they retracted their statements when -- in a twist no one saw coming -- people actually had the nerve to call Gloria Steinem and Madeleine Albright's comments sexist. Three months later it's time to reassess exactly where sexism lies in this election.

As The New York Times reported in March, white men have been the only demographic to consistently resist voting for Hillary during the primaries. Suggesting that difficulty securing the white male vote comes from a place of sexism, The Times noted this particular issue for Hillary is, "a sharp turnabout from 2008, when she won double-digit victories among white male voters... when [she] was running against a black opponent..."

Eight years ago white males were more okay with the idea of a white woman as president than a black man, but in 2016 they still prefer both white male contenders Bernie Sanders and Donald Trump to a potential female president. The Washington Post verified these statistics last week, stating:

One of the groups that votes against Hillary Clinton most consistently is white men. In 20 of 23 contests for which we have exit poll data, white men have preferred Sanders to Clinton...In Vermont, Sanders saw one of his most dominant demographic performances: White men in the state favored him by 83 percentage points over Clinton.

We can look at it another way. In 2016, white men are the only gender-race combination to overwhelmingly favor Sanders over Clinton. White men back Sanders by 26.4 percentage points more than do white women (who prefer Clinton, on average). In 2008, white men voted more for Clinton than Obama -- but were 20.6 points less supportive of her than white women.

The Times also asked the men they interviewed why they are not supporting Clinton and, "a few said they did not think a woman should be commander in chief." The men who said that, very surprisingly, were registered as Democrats and Independents.

Veteran Democratic pollster Peter Heart added, "Her most serious relationship problem is with white men, on a policy issue front but also stylistically, and she is at real risk for running worse than the average Democrat with white males."

What could that "stylistic problem" be? We have to include the possibility of Hillary reminding straight white male voters of their wives, moms, and sisters (if only on a subconscious level) -- people who perhaps they traditionally did not consider serious contenders for the presidency, let alone as people who might be able to truly hold office over them in any capacity.

Furthermore, a new poll on Politico suggests that 25% of Sanders supporters will not support Hillary should she secure the nomination, but will instead support Trump.

One such Bernie backer is Spencer Thayer, a straight white male who started wontvotehillary.com (I refuse to link to it because that sexist shit does not need more traffic). Thayer is encouraging Sanders supporters to vote against Hillary at all costs, even if it means a Trump presidency.

I find it hard to believe that a straight, white young man who so adamantly supports Sanders would be happy to have an insane billionaire for president, unless he, like Trump and so many of his supporters (male and female alike), simply can't fathom a woman in the Oval Office. (PS: Thayer is a self-described activist and artist who very well could have just made the website for personal PR purposes.) 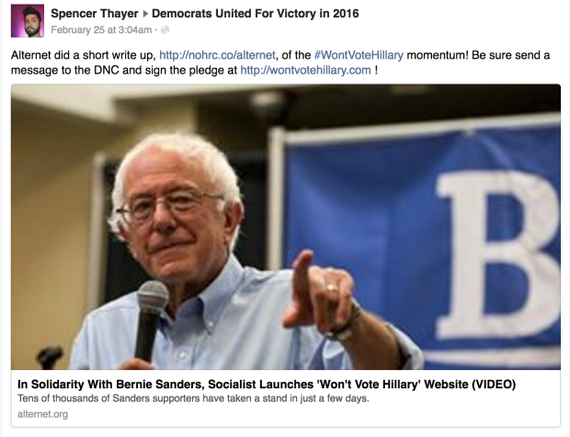 Sanders and Trump supporters have continuously fallen back on the same two talking points when it comes to knocking Clinton: Taking money from super PACs, and using her family's email server over the State Department server while Secretary of State. While Bernie himself has said he's sick of talking about the emails, both Bernie and his supporters will not let the super PACs go. It is an argument that inherently brings up the question of sexism when Democratically beloved President Obama has also swung to the side of super PACs but has not been criticized for it.

It is also important to note that Hillary has been gunning for president at least since college, if not her whole life -- meaning longer than Obama could have been before she ran against him in 2008, and longer than Bernie has been, at least in total number of years spent campaigning for the presidency. Hillary is a pre-Bernie and pre-Trump politician. Could she be where she is today if she hadn't played by the same rules every man did up until this point in time? No.

And if she were suddenly a dark horse former First Lady springing onto the scene, declaring she was running for president as a no-super PAC candidate, would anyone take her seriously or give a shit? C'mon. No. Bernie's campaign is a campaign he is able to run because he is a white male. Our first ever white female candidate does not have such privilege.

The hardest thing about laying out these points in one place is not the thought of sharing them with the Trump and Bernie-supporting men in my life, who I actually think will listen to and consider each point fairly. It's knowing that each point will be brutally and aggressively attacked by young female Bernie supporters. Just ask Lena Dunham: When it comes to sexism in this election, which has been created by both men and women, the people who have wanted to see it least have been women.

It goes back to Gloria Steinem and Madeleine Albright's point: Young democratic women who do not yet appreciate how much straight white males (consciously or subconsciously) resist change that pertains to the advancement of women do not yet fully understand the difference in being a woman who has fought tooth-and-nail her entire life for the presidency vs. being a straight white man running on a ticket that's pretty much cut-and-paste Obama's broad campaign promise of "Change."

They do not yet understand that the information that they're being given for Bernie and/or against Hillary is coming from bros of all ages like Spencer Thayer (who mostly just wants page clicks to pay for his DJing equipment, betch).