I have thought a lot about where change comes from; government regulation; populist movements or private enterprise. This week I was exposed to two very different, yet in some way linked, movements for change, which tie into my question.

I spent time visiting OccupyWall Street, the first truly significant sustained grassroots activist gathering in decades. The spectrum of participants, from old to young, somewhat racially mixed, gender balanced (for the most part) was surprising, though I don't know how many were visiting supporters vs. hard core occupiers.

The chanting is still ringing in my head "They got bailed out; We got left out." "We are the 99%." The snippets of conversation overheard on the plaza ranging from environmental topics to discussions regarding community discipline and procedures to discourse on political wrongdoing were set against of backdrop of sign makers, readers, sleepers, lovers, drum-beaters and eaters. I watched clean up crews tidy the tent tarps and possession strewn pathways where dozens slept. I hovered around the kitchen area, most curiously watching not only what was being dished up, but how it was prepared and sanitation procedures. Shaun, recently terminated from his job in Rhode Island, walked me through the water filtration system. The kitchen, naturally, is almost in the middle of Zuccotti/Liberty Plaza. While there was nothing mouthwatering from a culinary perspective, all reports indicate that the meals are being enjoyed and the price is right (free).

On Saturday, I watched as a large group marched off in the direction of Chase Manhattan Bank ("Lets take out all our money"), their ranks bolstered by union members and sympathetic visitors. The mood was focused and serious; the police presence was obvious and substantial. I was swept up in the intoxicating spirit of crowd and frightened at the same time. And though I was tempted to march alongside the protesters, in the end I walked parallel, not being able to fully commit, as I still struggle to make sense of what the call to action is beyond demonstrating.

At almost every opportunity this week, in private conversations or business meetings, I have raised the topic of Occupy Wall Street. It is notable how sympathetic and connected people feel toward the protesters. Even those who are by default in the fortunate percent, there is solidarity and the level of frustration with partisanship and the frustration with unending economic struggles is high. From far away, the volatility feels potent; at Liberty Plaza, it is present yet less threatening as the community of occupiers is seemingly peaceful, pre-occupied with establishing an order of sorts and dealing with its new-found recognition and status.

At times, the creativity in the group is everywhere: Painters and sign makers; street performers; a seamstress and tailor crafting garments or musicians playing solo or in pick up ensembles. There is a system of human amplification of announcement which commences with the call for "Mic Check" -- and the words of the speaker are repeated in unison by all in earshot who responded to the call by answering -- 'mic check' in acknowledgment. The repetition relay can last an entire meeting or just the duration of a single communication. At the same time, technology is everywhere, with the need to recharge the ubiquitous cell phone and establish media centers.

What is most gratifying for me in watching these events transpire is seeing public passion for public policy. Seeing generations who have never felt the need to protest against public policy or for civil liberties, finally becoming engaged, is fantastic. As far as I can see, this is a grass roots event and we wonder if change can come about as a result. What needs to happen next?

It is in connection with our food system that I struggle with the question of how to make change; to feed the hungry, address diet related illness, ensure access to healthy affordable food for all -- and that is just the beginning.

The James Beard Foundation, long known for extolling the virtues of superb chefs and producers of the "Oscars of the food industry" held their second conference on food and sustainability. The Leadership Awards -- a brilliant counterpoint to the Spring culinary awards -- were launched and awarded to a deserving group of food activists from iconic Michelle Obama and Alice Waters to unsung heroes like Sheri Flies and Jan Kees Vis and 6 others who are helping to change the system. (link).

The conference was built around the topic of Sustainability on the Table: How Money and Media Influence the Way America Eats. The topics were fascinating and made more remarkable by the fact that in a room filled with a broad spectrum of both leaders and stakeholders attached to the vast food industry, there was consensus on virtually all the basic issues; that we have eaten ourselves into an indefensible corner and have no choice but to fix our food system. From the context of food as a global commodity to school lunch to food safety, local buying trends and humane animal welfare, the 2-day conference signaled that what was once a group on the fringe has coalesced into a global movement. Against the backdrop of the role of media and money, both at once good and evil, over a dozen topics were discussed. And at the end of the conference, it felt like progress is being made, and the road ahead, though extremely challenging, is at least visible.

I am on a food community list-serve where a participant began to post updates on the OccupyWall Street group. The dialogue that ensued over whether to share that info in this forum highlighted the parallels between the activities of the two movements:

"Pick Up The Phone. Don't let them -- you, we all, are what stands between Clorox, Windex, Monsanto and democracy. Tomorrow will be an interesting day. I still have to get a cover crop and soil amendments in and just put down a 14-year-old dog yesterday. I am planning on being there Saturday night or Sunday am. I hope you will all be able to join me with 100 of your closest neighbors, family and friends. Pick pretty much any topic -- this is our moment. Our Moment is always bad timing but it only works if you show up. I hope to see you there."

"I 100% support Occupy Wall Street, but I cannot say strongly enough that this discussion does not belong on NEFOOD list serve. Cut it out, Gianni! Get your message out some other way than using NEFOOD list serve!"

"Mark Bittman and Siena Chrisman and many other committed organizers see a direct link between the Occupy and Good Food Movements. I don't think we want to be watching from the sidelines when we can help shape the fundamental changes happening in our society and communities."

"Could you not have made your point to Gianni using a nicer, more respectful tone? Times are tough for many folks, and lots of people are trying to be heard far and loud. Perhaps a calmer, more respectful approach to communications is in order by us all."

"I concur w/ Mario. Relax JB, OWS and our local and regional food webs are
many of the same folks, rolling in the same circles. These paths will be
crossing more often as the days go by."

And finally, from Wendy Godek, a doctoral student at Rutgers University: "First, the food movement should not be understated and we should not sell ourselves short of having an enormous potential to effect change. Second, the themes and concerns being presented by protesters of the OccupyWall Street movement are not new -- they have been voiced at protests worldwide for over a decade..."

The food movement has an intrinsic role to play in transforming an unjust, inequitable, and ecologically destructive system that benefits a few at the expense of the vast majority. Food is fundamental and our food systems are not working for us. The US food movement is part of this broader movement (contact WHY Hunger, for example) and share the common goal of all the protesters -- a more just, equitable, and healthier world.

Furthermore, if forums such as NEFOOD are not places to discuss these ideas and make these connections -- and encourage each other to organize and get out there to voice our frustrations, ideas, and sentiments, then where do we do this? Where do we encourage each other and support each other in our desires for change? I'm so glad Gianni brought this information to the attention of all of us. I'm in Brooklyn, have been down to Occupy Wall Street quite a few times and the word needs to get out those who are not here to witness this in person. "

Food for thought. Where does change come from?

The Best Acre on the Planet
OccupyWall Street 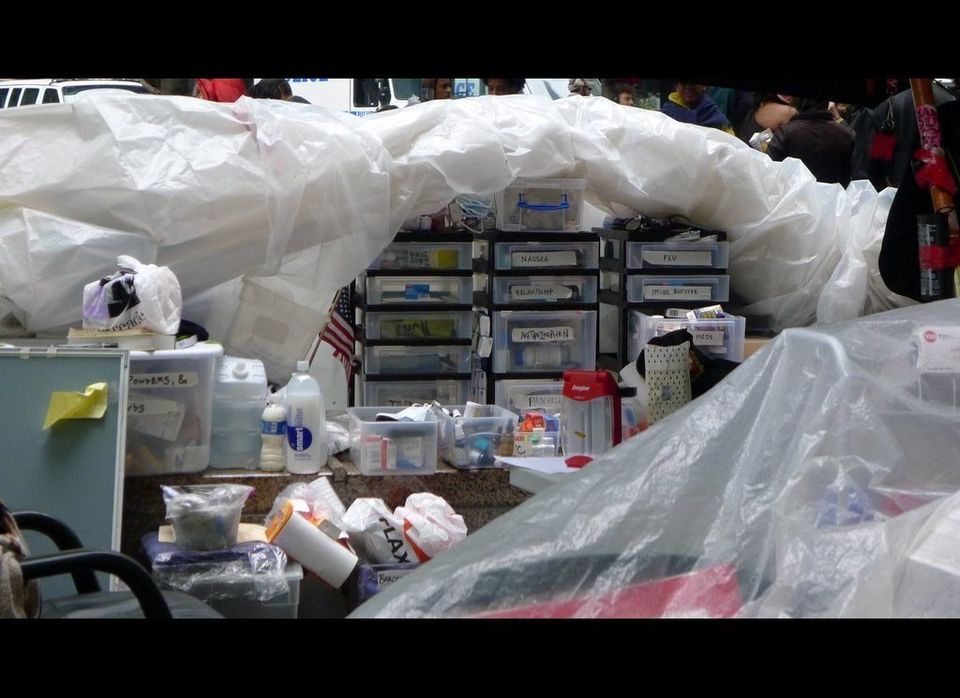