The following piece was produced by Huffington Post's OffTheBus project.


"I never knew exactly what did happen there. All I recollect is that at the beginnin' of that speech I was settin in the back of the room and when I come to I was hanging' on to the front of the platform. I recollect I looked up and seen Joe Medill [Chicago publisher] standin on the reporters' table lookin foolish-like and heard him say, "Good Lord, boys! I ain't took a note!"
Ronald W. Diller quoted in Lincoln's Lost Speech by Elwell Crissey 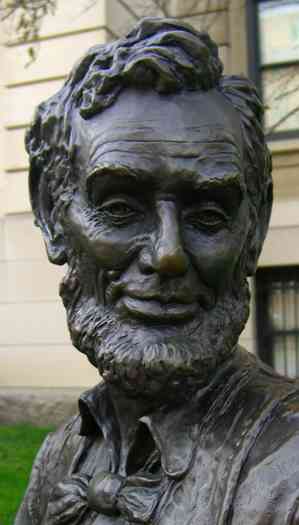 Abraham Lincoln's Lost Speech has been credited for catapulting him to the presidency and kicking off the Republican Party, but journalists present chose not to cover the story. The Off the Bus question is: what issue does your candidate embrace with little or no mainstream media coverage?

I caught up with a Barack Obama canvassing drive on its way through Bloomington, Illinois, the site of Lincoln's Lost Speech, to Iowa. Joel, one of the canvassers and proprietor of the local used bookstore, talked about similarities between his candidate and Lincoln.

"His message is so powerful, much like I think Lincoln's Lost Speech is, that for the political commentators, the journalists of the day, they can only approach it from the outside. They don't realize it's a vision of the whole - it's a whole transforming vision of the country. By transforming I mean bringing it back to its roots."

Seizing on an expert in Lincoln lore, I asked Joel which candidate he thinks could equal Lincoln's task of whittling a new suspender pin while arguing a case, then winning the case. "Gotta give props to Fred Thompson," he answered. "If anyone can whittle it would have to be Fred Thompson.

Joel also confirmed that the night of Lincoln's Lost Speech was the beginning of the Republican Party breaking off from the Whigs. With the Religious Right discussing options for a third candidate acceptable to them, his take is: "I come from a strong religious background. My father was a minister, but I can't imagine him thinking a religious party in the United States would be any kind of a good idea."

I talked with Joel and his 16-year-old son, as well as volunteer Carolyn on her sixth trip to Iowa to knock on doors - riding four hours each way. They each gave wonderful video comments which were unfortunately swallowed by bus exhaust noise. It's one of the hazards of being behind the bus.

Being OffTheBus, you see what doesn't get covered. This week, Ron Paul supporters are looking for more coverage of his Straw Poll winning streak, and John Edwards backers are still waiting for the New York Times to report on his union endorsement. Obama canvassers are impassioned about what's not in his narrative. As were Lincoln's.

"He knew what he was doing' that night. He knew he was cuttin' loose. He knew them old Whigs was goin' to have it in for him for doin' it, and he meant to show 'em he didn't care a red cent what they thought. He knew there was always a lot of fools in that new party he was joining - the kind that's always takin' up with every new thing comes along to get something to orate about. He saw clear as day that if they got started right that night, he'd got to fire 'em up, so he threw back his shoulders and lit in," recalled Diller, the local druggist and an eyewitness to the speech.

Bloomington was on Lincoln's court circuit, and they have plaques all over town to prove it. During a flatboat trip he ran aground and as he figured out a way to raise the flatboat and save his cargo, locals came out to cheer him on. He ended up patenting the invention and probably mentioned that in his Bloomington speech Discoveries and Inventions, but the wrong date was listed in the newspaper and the location was hard to find. A plaque near Kelly's Bakery & Cafe says so.

There's something inherently midwestern about not only commemorating the site of Lincoln's "Inventions" speech, but also why it was a flop. There is also encouragement to be found here. I know that they're kind to New Orleans evacuees.

One day Lincoln's friend Jesse Fell saw him walking out of Bloomington's courthouse and brought the young attorney into his brother's office to request an autobiography. Fell, the grandfather of Adlai Stevenson, had been hearing the excitement out East over the Lincoln versus Douglas debates.

Lincoln turned his eventual campaign manager down for a year, and when he changed his mind asked that, "If any thing be made out of it, I wish it to be modest." As to the note's briefness, 'There is not much of it, because there is not much of me." Lincoln also downplayed his oratory skills.

An eyewitness to the Lost Speech, John Wentworth of the Chicago Democrat wrote, "I shall not mar any of its fine proportions by attempting even a synopsis of it." The press was either too enthralled to write, or publishers censored the fiery anti-slavery rhetoric for economic reasons. Bloomington author and Illinois Supreme Court Reporter Isaac Newton Phillips in 1901 discounted a version written decades after the fact with: "We do not know what he said."

But we do know how he said it.

"His speech was full of fire and energy and force. It was logic; it was pathos; it was enthusiasm; it was justice, equity, truth, and right set ablaze by the devine fires of a soul maddened by the wrong; it was hard, heavy, knotty, gnarly, backed with wrath," said his law partner William Herndon who also described it as the best speech of Lincoln's career.

This was table-jumping, string bean Lincoln. All cheekbones because he had not yet taken an 11-year old's advice to grow a beard to lend him gravitas. His firsts campaign image consultant. The Lost Speech did not survive to be dissected. Bloomington's courthouse burned to the ground at the turn of the century, some of the Lincoln lore burning with it.

The speech probably was not religious. Upon finding out most of Springfield ministers polled against his candidacy Lincoln wrote:

"I am not a Christian -- God knows I would be one but I have carefully read the Bible, and I do not understand this book. These men well know that I am for freedom in the territories, freedom everywhere as far as the Constitution and the laws will permit, and that my opponents are for slavery. They know this, and yet, with this book in their hands, in the light of which human bondage cannot live a moment, they are going to vote against me. I do not understand it at all."

And the speech probably was not against old timey gay marriage. Lincoln shared a bed with his friend for years, as he later commented on to Congress when vouching for Joshua Speed's brother for Attorney General, "I slept with Joshua for four years, and I suppose I ought to know." Historians are still thumb-wrestling over the significance of the general storekeeper inviting Honest Abe to share his bed when he came in to buy bedding.

A 19th Century candidate could be religiously ambiguous with a long-term bunk buddy, but in the moral firestorm against slavery, pencils fell silent. What Lincoln saw in New Orleans on his first trips south influenced him deeply. He wrote to Joshua. "How can any one who abhors the oppression of negroes, be in favor or degrading classes of white people? Our progress in degeneracy appears to me to be pretty rapid. As a nation, we began by declaring that "all men are created equal." We now practically read it "all men are created equal, except negroes."

"When the Know-Nothings get control, it will read "all men are created equal, except negroes, and foreigners, and Catholics." When it comes to this I should prefer emigrating to some country where they make no pretence of loving liberty -- to Russia, for instance, where despotism can be taken pure, and without the base alloy of hypocracy," Lincoln's letter concludes.

With letters like this written around the time of the speech, it's easy to imagine the direction it took.

"In ten minutes he was about eight feet tall; his face was white, his eyes was blazin' fire, and he was thunderin, 'Kansas shall be free!' 'Ballots, not bullets!' 'We won't go out of the Union and you shan't.'" Diller described. The Union line is the only part of the speech universally agreed upon.

"Generally, when he was speakin', he was cool and quiet and things all fit together, and when you come away you was calm - but your head was workin'; but that time up to Bloomington he was like - what's that the Bible calls it? - avengin fire" - yes, sir, that's it, he was like avengin fire."

Presidential candidates who would like to air their current lost speeches are welcome to submit them here in video form. Bonus points for describing what they plan to do about New Orleans, and throwing in a little avenging fire.