Thirty-years ago, when my children were small, I dreaded the arrival of the holiday season and by the time Christmas arrived I would turn into Scrooge. I hated the holiday traffic jams, the dearth of parking spaces, department stores as crowded as a sporting event, and checkout lines longer than the ones at the DMV. I loathed going to holiday parties and making small talk with inebriated people I hardly knew, and dreaded my relatives who stayed for a week. I grumbled when my wife asked me to hang the outside lights and disliked decorating the Christmas tree with the family. The holidays seemed to be nothing but stress. The way I saw it, the holidays were a month-long mania that reached a frenetic climax on Christmas day, and then collapsed into depression when the credit card bill arrived.

My wife's attitude towards the holidays was the opposite. She loved it and devoted herself to making it as joyful as possible, especially for the children. Her mother had died when she was only six years old, and she'd experienced a number of bleak Christmases growing up. She was resolved that our children's Christmas was going to be spectacular, and she succeeded, which meant the credit card bill was rather spectacular too. On Christmas day, as the children unwrapped one gift after another, I would grimace as I mentally did the accounting. By the time the last present was unwrapped, I was stressed about money. The only decent thing I did on Christmas day was to keep my disdain to myself, but I wasn't much fun to be around.

Then one year, a week before Thanksgiving, I was diagnosed with a brain tumor. It was benign but would kill me if it wasn't removed. My doctor outlined a number of disturbing neurological problems that the delicate surgery was likely to cause and he referred me to the best neurosurgeon in the area, who couldn't schedule me until after the New Year. This meant the tumor and I would have to face the holidays together.

Medically, the delay wasn't a problem, but sitting around ruminating on how disabled I might become was terrifying. I would wake up every night at 3 o'clock in the morning and stare out the window into the dark, cold night and worry that I'd be too disabled to support my family.

Then one night a week or so after Thanksgiving, while staring out the window into the dark, I reached the point where I couldn't take it anymore. I asked myself, which was worse? The neurological problems that might happen to me in a few weeks, or the intense fear that was happening in me every day, all day long. The answer was clear; fear was worse. I could see that I was believing every fearful thought I was thinking, and it was painting me into a tight corner of gloom and doom. Obviously, I needed a new attitude. For the next half hour I was alert to every fearful thought my mind produced, and I practiced letting go of these thoughts simply by not believing them. Gradually, my mind grew quiet and eventually I began to feel at peace. When I looked out the window again, the cold, dark night that loomed like a black hole about to suck me in had changed. What I now saw was the glow of moonlight shining on the trees that made the night feel sacred.

I made the decision, right then and there, to work at letting go of fear whenever it raised its ugly head and to strengthen my willingness to be at peace as I faced whatever I had to face that day. I found that choosing peace wasn't as hard as I thought. Stress and fear were hard. Peace actually made the day easier, better.

The next day, as I was driving to work, I saw a bumper sticker that said, Peace is the Reason for the Season. I began to think about peace and the qualities it instills, such as not condemning people or events. I realized that I'd spent nearly every holiday judging everyone and everything, and I decided to stop. Instead, I'd practice counting my blessings and let my friends and family know how grateful I was for their love. Later that week, I was Mr. Christmas the night we decorated the tree and strung the lights on the outside of the house. I thought this might be the last time my body can perform these tasks, and I felt grateful to be able to do it. For perhaps the first time, I noticed the happy, excited looks on the faces of my children as they watched me hang the lights, and I loved their cheers when I flipped the light switch. I even accompanied my wife on her shopping trips and discovered she was more discerning about her spending than I had thought. It took my family a while to adjust to the "new me." My wife was amazed at the change. She had the stunned, happy look of a person whose wish had been granted.

Initially, I felt guilty over how much strain I'd caused everyone during previous Christmases, which got my touch with another attribute of peace: forgiveness. I had to forgive myself for being a jerk during those times, and this opened my heart to forgiving grievances I'd been carrying about other people. I discovered that as stressful as the holidays can be, it was also one of the few times during the year when hearts were open and extending good cheer. So, I decided to be one of them. In the traffic jams and crowded stores I practiced being at peace. When I stood in the long lines, I practiced sending compassion to all the tired souls standing in line with me.

It was a glorious Christmas, and that's not all. The surgery was a complete success, sparing me a life of disability. Medical science attributes this outcome to the way I shifted my mental state from fear to peace. It's called "the mind-body connection." I call it the best Christmas gift I ever received. 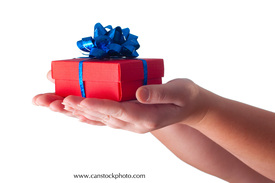