Movies have become a great comfort in what has been a tumultuous year. They've entertained us. Made us laugh, feel courageous, scared, romantic and educated us too. It's a perfect time to reflect on the films, performances and black artists who made 2015 special. And might as well get a head start on the high-quality movies that will contend for Oscars and be released in theaters and on DVD/VOD in weeks to come. 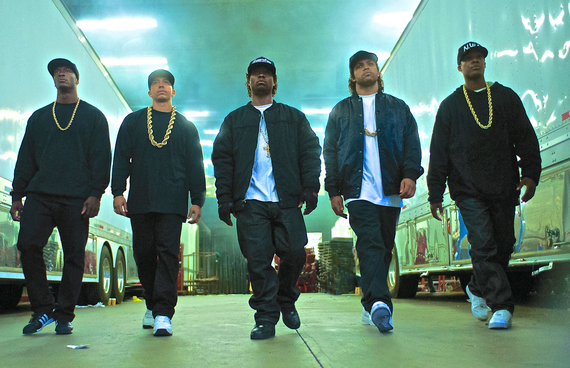 Straight Outta Compton -- One of the Best Movies of 2015

Amy (***1/2) Amy Winehouse burned bright like a firefly and died just about as quickly. Her jazzy, smooth and tortured Billie Holidayish voice haunts the soundtrack. Her infamous drug addiction and self-destructive relationships are on view. A brilliant and sobering documentary by director Asif Kapadia.

Black Panthers: Vanguard of a Revolution (****) Whittling down what must have been countless hours of possibilities (archival footage, interviews, photos) into a thought-provoking and coherent documentary about the Black Panthers was done expertly by director/producer/writer Stanley Nelson and editor Algernon Tunsil.
Few stones are left unturned.

Creed (***) Only an ingenious filmmaker (Ryan Coogler) could fathom a continuation of the Rocky saga that is as much of a crowd pleaser as the original. Michael B Jordan steps up as Apollo Creed's son Adonis, and he takes his punches with grace. Sylvester Stallone digs deep to render his best performance ever as the aged pugilist Rocky Balboa. A knockout.

The Revenant (***1/2) After the success of his Oscar-winning film Birdman, one might have thought filmmaker Alejandro G. Inarritu's night miss a beat. He didn't. His tale of a frontiersman, who survives a brutal bear attack, is left for dead then seeks revenge for his son's murder, is a violent and riveting experience. Leonardo DeCaprio deserves the Oscar for Best Actor for sheer brilliance and guts.

Room (****) A young woman (Brie Larson) and her vulnerable son (Jacob Tremblay) have been locked up in a shed and held hostage for years. They plot their escape. A deceptively simple script (Emma Donoghu), directed with skill and restraint (Lenny Abrahamson), turns into an astounding and heart-wrenching film that never loses its dramatic edge.

Son of Saul (***1/2) First time filmmaker László Nemes has written and directed a devastating Holocaust drama based on an innovative creative strategy: "The camera is his [Saul's] companion; it stays with him throughout this hell." The audience witnesses a very personal story about a man determined to give a dead teenager a proper burial at Auschwitz. The claustrophobic cinematography keeps you astonished.

Straight Outta Compton (***1/2) This isn't some chump change Sundance indie movie about the rap group NWA and hip-hop culture. This is a full-fledged, big-budget looking homage to the L.A. rap scene, that smartly, emotionally and historically capsulizes the life and times of Eazy-E, Ice Cube, Dr. Dre and everyone around them who caused the big bang that popularized West Coast rap music. An Oscar-caliber film.

Timbuktu (****) We read how Islamic fundamentalists are encroaching on the basic liberties of people in Africa and the Arab world. Veteran filmmaker Abderrahmane Sissako (Bamako) approaches this complicated social phenomena by creating a simple allegorical tale about a sheepherder who comes under the wrath of an Islamic tribunal and the results are deadly. The film is as spiritual as a biblical passage.

Wild Tales (****) If a past transgression has been eating your soul alive, these twisted vignettes could be your remedy. Tales of revenge, miscalculations, deceit, unbridled anger and jealousy beyond anything you can fathom are doled out with a wicked sense of humor by director Argentinean writer/director Damian Szifron. Macabre and hysterical.

Overrated
Carol (Sterile. Everyone wears new clothes like they're in Saks' store window.)
The Martian (After ten minutes we know Matt Damon's coming home.)
Spotlight (Go watch an episode of Law & Order and save your money.)
Truth (Dan Rather made a big mistake and so did this film's producers.)

Worst Movies
Fifty Shades of Gray (Sets women back 50 years.)
Irrational Man (Woody Allen, who is on autopilot, forgot to press the start button.)
The Man From U.N.C.L.E. (Boring actors: Henry Cavill, Armie Hammer. Boring.)
Our Brand is Crisis (Sandra Bullock rarely makes a wrong move. Until now.)
Pan (How could anyone ruin the legacy of Peter Pan? This is how.)
Southpaw (Everything that was wrong with this boxing movie was right in Creed.)