As 2014 draws to a close, it's a perfect time to reflect on noteworthy films, strong performances and the strides that black artists made this past year. It's also a good time to spotlight the top-quality movies that will vie for Oscars and be released in theaters and on DVD/VOD in weeks to come. 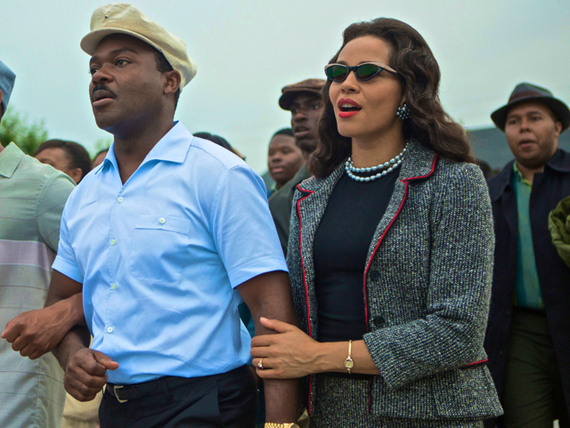 (Photo courtesy of Paramount Pictures)
David Oyelowo and Carmen Egojo co-star in the historical
bio/drama Selma, one of the 10 best films of 2014.

Belle (***1/2) A mind-boggling story based on fact about a biracial female being raised in a white aristocratic home in 18-century England. Actress extraordinaire Gugu Mbatha-Raw lights up the screen in a very romantic and surprisingly socially-relevant tale. Lavish production elements. Nice acting all around. Strong writing by Misan Sagay. Smart direction by British director Amma Asante.

Beyond the Lights (***) This ode to chanteuses fighting personal demons (Rihanna-types) is the brainchild of writer/director Gina Prince-Bythewood, who made the most romantic film of the year. A wayward pop/hip hop singer (Gugu Mbatha-Raw, Belle) is rescued by a stoic cop (Nate Parker). A sweet, modern love story set in the soul-eating, kinetic music industry. Well-written, directed and acted.

Birdman (****) It's not like Michael Keaton's career was kaput, but it seems like he raised himself from the dead with this invigorating performance. Mexican director/writer Alejandro González Iñárritu gave Keaton a plum role as a has-been actor and ex-super hero trying to make it big on Broadway. The line between reality and fantasy is blurred. Excellent acting from all involved including Ed Norton and Naomi Watts.

Boyhood (****) Shooting a film over the course of 12 years takes patience and imagination. Writer/director Richard Linklater had that in abundance as he followed the life of a small boy into young adulthood. Patricia Arquette as the stalwart mom is superb and Ethan Hawke as the bungling dad is pretty good too.

Dear White People (***) The narrative follows the plight of four black students at an almost all-white Ivy League school. Biting satire plays havoc with race relations. Credit filmmaker Justin Simien with a brilliant view on a complex subject and for equating Quentin Tarantino's Django with Birth of a Nation and Gone With the Wind. Bravo.

Grand Budapest Hotel (***1/2) Wes Anderson's quirky films (The Royal Tenenbaums) have been an acquired taste only a few could love until this whimsical story about a snowy mountaintop hotel in the fictional Republic of Zubrowka. To hell with conventional storytelling, just throw in a confusing plotline, a bazillion cameos and wait for the dust to settle. Sweet ensemble acting. Tony Revolori, as the quirky bellboy Zero Moustafa, steals the movie.

St. Vincent (***1/2) -- Something about saying grouch and eccentric and Bill Murray seems redundant. Murray is a Brooklyn neighbor who babysits the vulnerable kid next door. His idea of teaching the boy how to be a man involves betting on the horses, drinking in bars and beating up the class bully. Cool. Nicely directed by Theodore Melfi. Melissa McCarthy, Naomi Watts and Terrence Howard chew up the scenery in the year's best comedy.

Selma (****) It's as if David Oyelowo was born to play Martin Luther King -- same nose, skin tone and cadence. Carmen Ejogo as Coretta is perfectly cast too. Smartly directed by Ava DuVernay, who steps out of the shadows of small indie filmmaking to create an Oscar-caliber, historical film that depicts the bravery of a civil rights activist and a fiery reverend who outsmarted LBJ and got the Voting Rights Bill passed. Inspiring.

Starred Up (***/12) A violent British adolescent (Jack O'Connell, Unbroken) gets sent to a tough prison where his dad (Ben Mendolsohn) is a career jailbird. This brutal film makes HBO's Oz look like Sesame Street. Stark realism is so gruesome you can't look at the screen. Director David Mackenzie gets under the grimy skin of prison life in a way that will make you never one want to get arrested.

Whiplash (***1/2) Who knew band practice could be coupled with emotional abuse? Young actor Miles Teller plays a very ambitious drum student at a prestigious music school who is tormented by an instructor (J.K Simmons), who is more sadistic than Satan. Damien Chazelle's script takes you places you didn't dream you'd go and his direction doesn't give you a way out. You'll stay until the best man wins.

Honorable mention:
Cesar Chavez
Cuban Fire
The Drop
Force Majeure
Fury
Get On Up
I Am Ali
Ida
Le Weekend
Maleficent
Nightcrawler
Omar
Ride Along
Salt of the Earth
A Stranger Among Men
Think Like a Man Too
Unbroken

Worst Movies:
Dumb and Dumber 2 (The first one was a classic comedy. This one was classless.)
Hercules (The Rock was good as Herc. Bret Ratner's direction was awful.)
Magic in the Moonlight (Woody Allen phones in another ho-hum movie.)
A Million Ways to Die in the West (Seth MacFarlane directs a dud western.)
Nymphomaniac: Vol. I and Vol. II (Remember when sex used to be fun?)
Sex Tape (A whole movie devoted to a missing sex tape. Really?)
Tyler Perry's Single Mom's Club (He churns movies out like a sweat shop factory.)