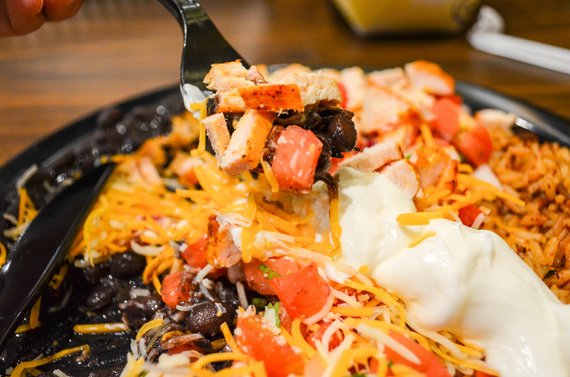 Gluten intolerance can be a real jerk. Half your friends think you're lying about your convulsing tummy, and getting past the drive-thru without asking 15 necessary questions is a near impossibility. We can't do anything about your questionable taste in friends, but we can at least save you some time on your next trip to McDonald's.

Below, we humbly present the best gluten-free options at major fast-food chains. We didn't include any fries, because the risk of cross-contamination is so high, but if you'd like to order them with any of these items, just ask a manager about their cooking methods first. You probably already knew to do that, though. Let's dive in. 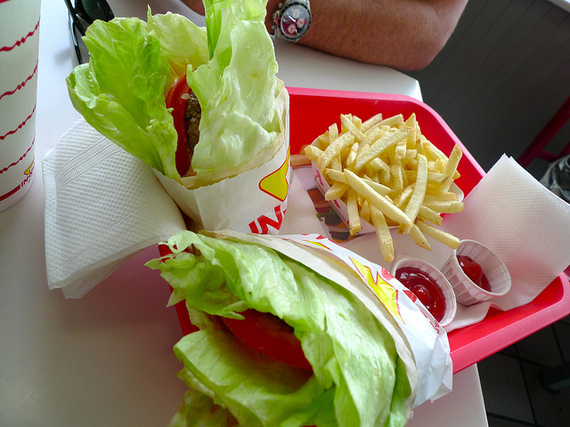 In-N-Out: Double Double, protein style
Does gluten make your stomach meaner than Mike Tyson after someone breaks into his menagerie of pigeons? Order off In-N-Out's secret menu -- just ask for your burger "protein style," which is code for lettuce wrapped.

Burger King: bunless Whopper
Order that Whopper patty -- it's totally safe sans bun. Plus, you can wash it down with a chocolate, vanilla, or strawberry milkshake... or breakfast syrup, if you're so inclined.

Chick-fil-A: grilled chicken nuggets
Be careful with your words here, because Chick-fil-A's regulation nugs are just as gluten-laden as you'd expect. But the grilled ones are fair game, and, according to some sources, tastier.

McDonald's: premium bacon ranch salad
In order to get a gluten-free Big Mac, you not only have to skip the bun, you also have to skip the special sauce (it contains wheat!). This is straight-up sacrilege, so avoid it all together by burying your face in a salad bowl of ranch and bacon bits.

Culver's: George's Chili Supreme
When much of your reputation is built on breaded and fried cheese curds, you're not exactly a staple in the GF community. Yet surprisingly, Culver's has several options. At another chain, the Cranberry Bacon Bleu Salad or Baja Chicken Enchilada Soup might be the recommendation here, but instead it;s George's Chili Supreme. because George was nice enough to put a "secret blend of peppery spices" in his slow cooker, and no gluten.

KFC: House or Caesar Salad
Sorry, people with Celiac, but you're basically beggars at the Colonel's house. The gluten filter on the KFC site yields this sad mess of soft drink options, along with two salads that do not include dressing or croutons. To add insult to injury, they're side salads. We suppose you could pass on the Caesar and load up on corn, coleslaw, and green beans, but that'll just remind you of the other sides you're missing. (Potato wedges, we hardly knew thee.)

A&W: orange float
The bunless burger or hot dog is the move here, but did you really come to an old-timey soda fountain to order a bare beef patty? Nah, you came for a float, of course! The root beer one comes with a "may contain allergens" warning, so get the creamsicle counterpart instead. 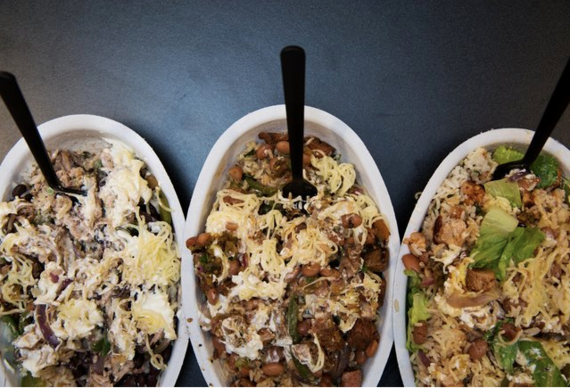 Chipotle: burrito bowl
Chipotle is a friend to everyone, even those who get sick at the mere sight of muffins. Only the flour tortillas are off-limits here, so a salad or tacos in corn shells are completely safe. The burrito bowl, though, has the most potential. Go ahead and get it with extra guacamole. You deserve it for avoiding another flare-up.

Sonic: bunless bacon cheeseburger
As with so many other places, Sonic can't do much for the gluten-free crowd unless you ask for that bun to be removed. Once you've done that, you've got beef, bacon, and cheese at your disposal -- plus whichever slush your heart desires.

Popeyes: red beans and rice
By nature, fried chicken restaurants are lands of limited opportunity. Sides are basically the only gluten-free things at Popeyes, but miraculously, its best one made the cut: Red beans and rice. For variety, Cajun Rice is waiting in the wings.

To find out what gluten-free options are the best choices at 10 other fast-food joints, get the full story at Thrillist.com!

How to Hack Whole Foods