The US Supreme Court ruling earlier this week gives a scary look at how justice in America is routinely bought and sold.

The case -- Caperton v. A.T. Massey Coal - began when Don Blankenship, chairman and CEO of Massey, lost a $76 million verdict in a fraud lawsuit brought by smaller rival, Hugh Caperton, in West Virginia. Caperton was driven out of business by Massey.

Coal Baron Blankenship is not a man who likes to lose. He is a Huey Long type character who looms large over the political landscape of West Virginia. He looked at the members of the state Supreme Court and decided he didn't like some of them.

Why not buy a new judge?

Blankenship had the audacity to target Judge Warren McGraw, who he thought was anti-business and would rule against him. Blankenship spent $3 million in odious, nasty attack ads destroying the liberal Judge, and getting his man, an unknown Brent Benjamin, elected in 2004.

The money did the job.

Caperton asked Judge Benjamin to recuse himself three times, because he obviously could not be impartial toward Blankenship, who had literally bought him his court seat. Benjamin refused each time saying he could absolutely be impartial.

Three years later, Benjamin, predictably cast a critical vote in a 3-2 decision that sided with Blankenship and threw out the $76 million verdict.

Spending $3 million to save $76 million sounds like an effective use of corporate funds for Massey Coal.

But Blankenship was not just counting on Benjamin's vote. Over the years, he also got very chummy with the Chief Justice Elliott Maynard and was photographed vacationing and sipping champaign in Monaco with Maynard and two female companions. No one is sure who paid for the expensive vacations.

Chief Justice Maynard insisted that his friendship and vacation with Blankenship would not affect his impartiality on the court when it came to deciding the $76 million suit.

But when the Monaco beach photos were published in the West Virginia papers, Chief Judge Maynard eventually, reluctantly, stepped down from the case and said "I have no doubt in my mind and firmly believe I have been and would be fair and impartial .."

All this was too much for the US Supreme Court, which ruled in a 5-4 decision that Benjamin should have disqualified himself in this extraordinary situation because an interested party's spending had a "disproportionate influence" in a pending case.

With such an obvious principal at stake --- that justice should not be for sale --- it's a wonder that the Supreme Court's decision was not unanimous. Do the four dissenting judges -- Roberts, Scalia, Thomas and Alito -- really support this "legal" and obvious form of bribery? They argued that spending money is a form of free speech and should not be prohibited? Does that apply to giving a judge a wad of cash under the table?

Unfortunately, justice continues to be for sale in 39 states across the nation that elect judges. And more and more wealthy special interest groups and corporations are trying to buy the judges in this "legal" manner.

The prevailing culture was dramatically portrayed in John Grisham's 2008 bestseller The Appeal. A multinational corporate tycoon manages to unseat an anti-business judge, with his handpicked candidate, so the Mississippi Supreme Court can overturn a $41 million dollar toxic waste judgment against his chemical company.

It's amazing how closely the recently West Virginia case parallels this gripping novel.

When Grisham was asked by Matt Lauer on the Today Show, "Was there a specific story that caught your eye in the headlines that made you want to write this?"

"There have been several," Grisham said. "In judicial elections ... huge sums of money get involved on both sides to purchase a seat on the Supreme Court."

When Lauer asked Grisham if the plot was "far-fetched," Grisham replied, "It's already happened. It happened a few years ago in West Virginia.

"A guy owned a coal company. He got tired of getting sued. He elected his guy to the Supreme Court. It switched ... back his way. Now he doesn't worry about getting sued."

Video of the Today Show interview (click photo to see the entire interview): 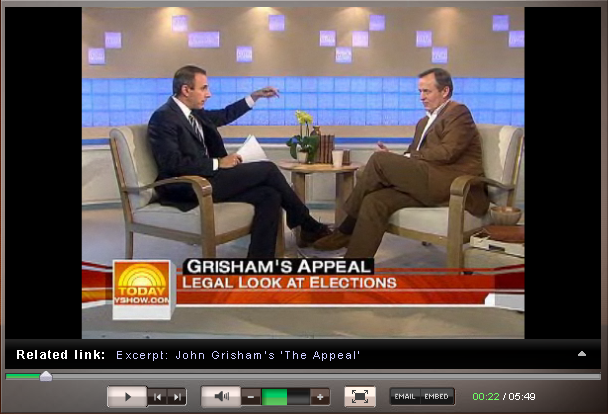 Michael Shnayerson did an outstanding Vanity Fair 2006 article about Blankenship and his bullying tactics in West Virginia.

The cost of judicial campaigns is skyrocketing. As elections have grown increasingly nasty, judges have been forced to raise money like politicians, creating the perception --- and often the reality --- that justice is for sale. The real scandal isn't people doing what's illegal, it's that what they are doing is perfectly legal.

Blankenship has suffered a temporary setback. The case will go back to the West Virginia high court and he still might prevail, but most certainly the buying of judges will continue.