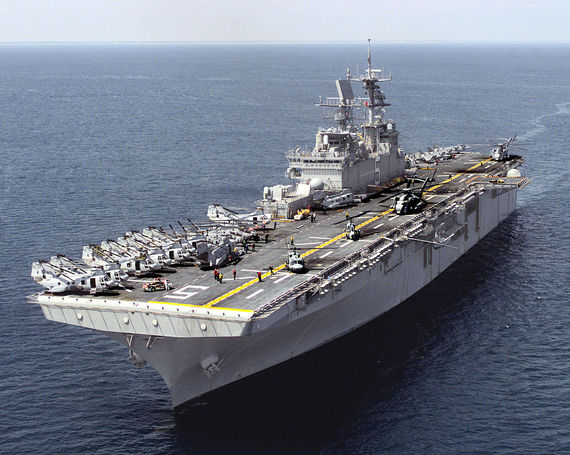 The USS Bataan is an amphibious assault ship commissioned in 1997 and carries multiple helicopters, harrier jets, cannons, missile systems, nearly 2000 marines and over 1000 sailors. In addition, the 844 foot long, 42,000 ton vessel is a 600 bed floating hospital staffed with doctors, nurses and dentists. The Bataan is in New York City for Fleet Week and docked at 48th Street and 12th Avenue at Pier 88.

Commander David Ritter is the Bataan's Chief Engineer, and I was fortunate enough to spend Saturday morning with him and members of his remarkably dedicated crew. I first met Commander Ritter on the hanger deck where marines and sailors greeted tourists while demonstrating the use of various weapons and explaining their different job functions. I also walked through the well deck, which deploys hovercraft and functions as "a platform to get marines to the beach." 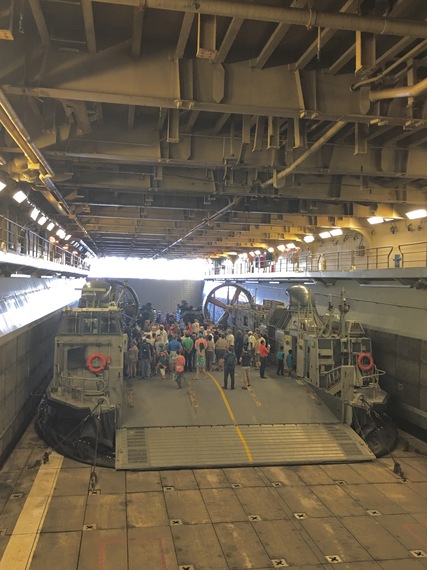 Visitors experience a hovercraft in the Well Deck

However, my visit to the Bataan was to learn about Commander Ritter and the 220 sailors who work with him in engineering. Ritter, a 30 year navy veteran from Bristol, Tennessee laughed in agreement with me when I suggested that he was like Mr. Scott on Star Trek. Ritter's team not only makes sure the engines run efficiently and power the ship, they convert 200,000 gallons of sea water each day into potable drinking water. (The seawater gets boiled and condensed and the resulting brine gets dumped back into the ocean.)

Ritter gave me an extensive tour of the EOS (Engineering Operations Section) and peppered me all morning with endless Navy acronyms. HUMMER (High Utility Maximum Mobility Easy Rider). UNREP (Underway Replenishment). Commander Ritter was a gracious host with a great sense of humor and his pride for the Bataan and his engineering crew was infectious.

"What we do is not glamorous but it's very important and I couldn't be prouder of all the people who work for me. These kids have got gumption. They never make mistakes and don't get enough recognition." -- Commander David Ritter

I mentioned the mixture of men and women serving on the Bataan and Ritter made it clear that the Navy is a meritocracy and a unique work experience. "If you perform - you advance," he said. "There is no equivalent civilian job for what we do. You're away from your family for nine months during a deployment."

Commander Ritter took me down to the ship's engine room, where they create and generate steam for propulsion along with powering five enormous generators for electricity. Ritter introduced me to Electrical Mate Rafael Smith, who explained that just one of the Bataan's generators could power 2 ½ city blocks.

Everything starts down here. This is the heart of the ship. -- Commander David Ritter on the Bataan's engine room 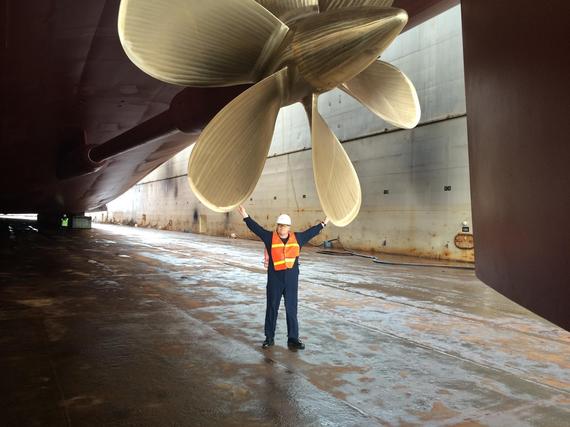 Commander David Ritter with one of two 18.5 foot wide propellers

The engine room is hot, loud (we wore ear plugs) and an amazing combination of 1960's machinery (boilers) and state-of-art technology. We then visited the Oil Lab, where they run boiler maintenance and monitor the pipes for "pitting," which Ritter described as similar to an ulcer in a human being. The pipes even have good and bad rust, just like someone's cholesterol. Finally and most amusingly, the person in charge of all of this maintenance is referred to as the Oil King.

I've made it my yearly mission to visit a different ship during Fleet Week and I continue to be awestruck every time. At the end of the tour, I got to meet a Marine demonstrating a device called SPACES (Solar Portable Alternative Communications Energy System) showing that the Navy is working on going green as well.

Multiple tours are open to the public and can be found at Fleet Week.