San Francisco's Bay One Acts Festival has just wrapped up its tenth anniversary season with two programs of short plays co-produced by small theatre companies scattered around the Bay area. Here (in order of increasing seriousness) are the plays that impressed me the most.

Written by Crish Barth, directed by Colin Johnson, and produced by Round Belly Theatre Company, The Fall scored a major triumph in transforming one of the most banal experiences into a rollicking keyboard comedy. Barth's play was inspired by an online chat group that started to discuss actress Natasha Richardson's skiing accident in March of 2009 but, as so often happens in chat rooms, quickly veered off course. The five participants who are furiously tapping away at their computer keyboards are:

Because none of the characters are facing each other, the audience is allowed to savor their incredulous -- and sometimes angry -- reactions to whatever gets posted in the chat room. This can range from Joy's smug sense of superiority to Dave's astonishment at what is happening to the discussion he's trying to moderate and keep civil. 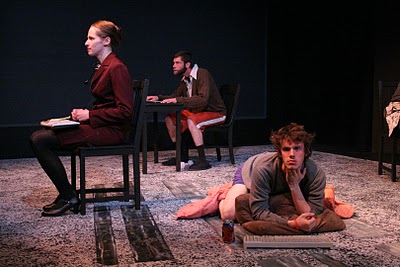 Joy (Maura Halloran), Dave (Brian Quakenbush) and
Steve (Lucas Buckman) at their keyboards in The Fall
(Photo by: Clay Robeson)


The audience also gets to witness snarky bits of dialogue like the following:

Considering how boring chat room dialogue can become, Barth and Johnson deserve kudos for being able to mine comic gold from a discussion sparked by a tragic accident. I especially enjoyed Maura Halloran's tightly-wound performance as Joy.

Capturing a sense of goofiness with words is easier said than done. That's why I was so impressed by Twice As Bright, a short two-character play by Daniel Heath that was produced by The Playwrights' Center of San Francisco and beautifully directed by Sara Staley.

Oscar (Ray Hobbs) is a soon-to-be divorced microbiologist who studies pathogens and claims to be "clean in ways that most people couldn't even imagine." Jen (Nicole Hammsersla) is a family doctor employed by Kaiser Permanente whose limited social skills may only work in an examining room. 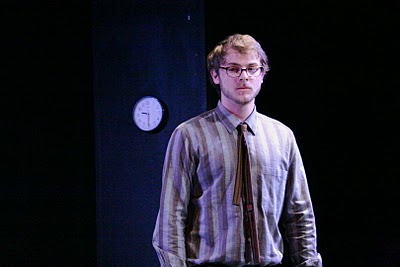 
When they meet in the Reno bus station, Jen has set herself a goal of falling in love with the next man she meets and then breaking up with him before getting on her bus (which is due to leave in 10 minutes). Her farcical attempts to seduce Oscar are shaped by the woman's desperate loneliness, social ineptitude, and rigidly linear patterns of thought. Oscar, on the other hand, is open to more possibilities. At first he may come across like a loser, but as a scientist he knows how to take an idea and run with it. 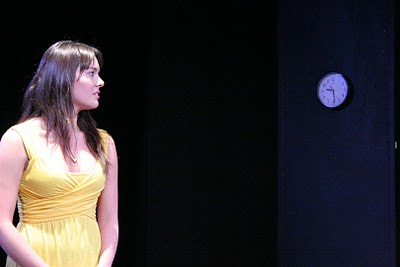 
Daniel Heath's script was bright, insightful, and wonderfully wacky. I thought Ray Hobbs and Nicole Hammersla did a splendid job of capturing the nervous energy required for this bizarre and hilariously dysfunctional encounter (cruising a bus station hasn't been this much fun in years).

Having recently enjoyed the world premiere of Hermes (his dazzling two-act play about dysfunctional behavior let loose on the world's global financial markets), Bennett Fisher's contribution to the tenth annual Bay One Acts Festival proved to be equally controversial.

In the past 25 years, computer applications have transformed financial transactions so that they now happen at lightning speed with far-reaching consequences. Inspired by a story that he heard on NPR, Pure Baltic Avenue lets the audience in on a vicious real estate scam similar to what took place in Arizona.

Fisher's play revolves around a get rich quick scheme in which three real estate speculators and a merrily enabling appraiser keep flipping a residential property between themselves so that its value quickly increases. With each sale, one of the participants calls the bank and asks for a mortgage loan (which is automatically granted). The paperwork is instantly signed, stamped, and notarized and the property trades hands in a ritual celebrating the group's power, chicanery, and bravado. 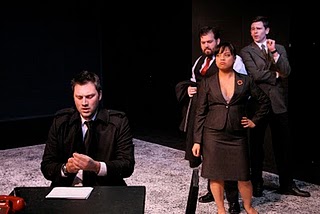 
Whether you choose to call it a round-robin scheme in house trading, a financial game of "Tag, You're It!" or a real estate-based Ponzi scheme, the last person to sign the papers comes out with a property that has been assessed at a ridiculously inflated value. So it's easy to understand why, when a bank officer shows up wanting to know how three mortgages got sold for the same property within an hour, the participants cagily trick the bank officer into signing the next set of papers and becoming the new owner of a severely overvalued property.

Produced by Threshold and directed by Alex Curtis, Pure Baltic Avenue's energy is reminiscent of how people who are high on the effects of power, drugs, money, or poppers like to take increasingly bold risks. I especially liked the performances of Samuel Richie as DeWitt and Marie O'Donnell as Parker (the bank's shocked representative).

One of the more surprising delights at the festival was Test Preparation by M.R. Fall. In this brief but intensely challenging drama, the playwright asks the audience to decide whether "standardized testing is Hell or Hell is standardized testing."

Presented by No Nude Men Productions and directed by Julia Heitner, Test Preparation starred Nick Dickson as Mister Francis, a frustrated teacher trying to get his hapless pupils up to par for the SAT examination. It's a situation the playwright knows all too well.

"We're all trapped in the same system until these various arbitrary totems -- the SAT score, the high school diploma, the eternal GPA, the bachelor's degree - have been collected, and then, suddenly, the system has no use for us anymore. The SAT might get you into college, but it's not going to tell you what to do once you get out. Test Preparation wasn't planned or premeditated; it just came out. Like most plays that arrive in such a fashion, it didn't take me very long to write -- probably about two days altogether." 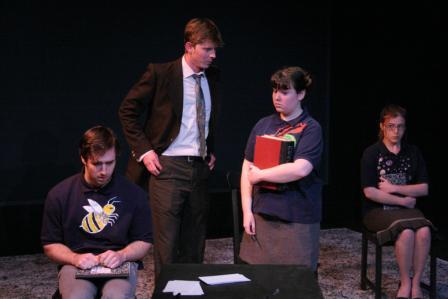 
Although there would seem to be little hope for Hoenig (Nick Trengove), Wondercrock (Megan Cohen) or Spotsalot (Leigh Shaw), M.R. Fall's script boasts the kind of delicious surprise ending that would be recognizable to readers of O. Henry's short stories. Test Preparation was anchored by Nick Dickson's memorable performance as Mister Francis (in addition to his training at the Clown Conservatory at the San Francisco Circus Center, it seems that Mr. Dickson has some solid acting chops). 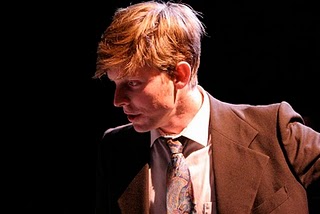 At 2010's Bay One Acts Festival I was deeply impressed by The Philadelphians, a tense and sometimes violent drama by Sam Leichter (who manages the Marin Shakespeare Company's educational outreach program). In a very brief time, Mr. Leichter was able to create a dense narrative in which two men revealed complex wounds and long-simmering resentments. The Philadelphians was an exceptionally intense piece of theatre.

Mr. Leichter's contribution to the 2011 Bay Area One Acts Festival is another two-character drama, directed by Paul Cello and produced by Instrumental Theatre. It looks as if his skills as a storyteller may be heading off into Stephen King territory.

In The Pond, Bella (Arianne Owens) is a very pregnant nurse waiting at home in rural Maine for her husband to return from a business trip. He was recently painted as a hero on the news after diving into a river to rescue two children trapped in a sinking car.

As Bella attempts to decorate her Christmas tree she hears a loud crash outside. Soon, a stranger is knocking on her door on a dark and snowy night.

Although Bella tries to stall until her husband returns home, when it becomes obvious that the stranger has been hurt in an accident and needs medical help, her nursing instinct takes over and she lets Decker (Derek Fischer) enter her home. As their initial chitchat starts to deepen, Bella discovers that Decker has known Bella's husband since childhood and is none too happy about his recent successes. 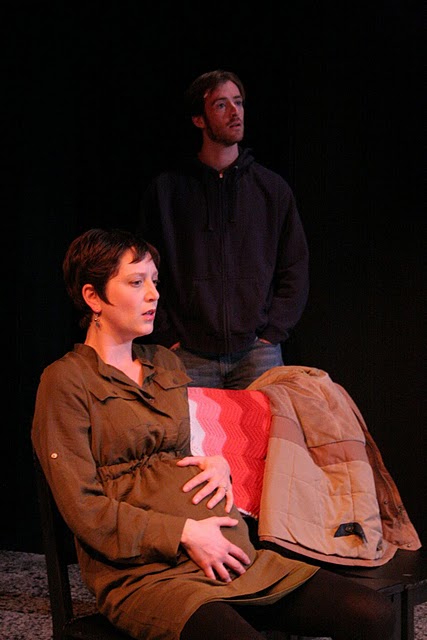 
What follows is a gripping scene in which Decker's voice lowers in pitch and his demeanor becomes more threatening. Slowly, Decker relates a tragic story about Bella's husband and the death of one of his closest friends.

It seems that many years ago Decker, Bella's husband, and their best friend got rip-roaring drunk and then went for a swim across the pond. Although they had frequently swam the same distance, their friend (who had recently come out and told them he was gay) never completed the journey.

Beautifully written, the monologue starts with an ominous sense of foreboding but, instead of the scene turning violent, it offers Decker a poignant catharsis for his long-tortured soul and allows him to go back to his car in a state of grace.

The Pond is a magnificent piece of dramatic writing, made all the more powerful by Derek Fischer's riveting performance and Arianne Owens' subtle reactions as she listens to his tale of woe. Based on what I've seen so far in The Philadelphians and The Pond, Leichter is far ahead of most young playwrights when it comes to "peeling the onion" to heighten dramatic tension. He notes that:

"Last year, I wrote a play. It was the first time my work had been seen by other people. It was an amazing experience. In general, I find that my experiences as an actor are helpful in writing plays, and have been a solid foundation for me as I worked to develop The Pond. As a playwright, this is the first time I've had a play developed. I've met with Paul and the actors several times to read the newest version of the play, allowing me to hear it out loud and make revisions. The process has been incredibly helpful. Paul has been instrumental in the formation of the play.

I love ghost stories! By that, I mean both stories that are literally about supernatural forces, and those about memories and experiences that haunt us -- the metaphorical ghosts in our lives. I tend to write about the latter. Most of my plays so far have been about people who have pasts that they cannot escape. The Pond isn't scary in the "BOO!" sense, but rather it will (hopefully) creep under the audience's skin, making them reflect on the skeletons they have in their own closets, the secrets they've buried and never speak of... and what might happen if, one day, someone came into their home and dug them up. I have a few short pieces -- 10, 20, and 30 minutes long -- that I've thought about combining into a night of short plays. They're similar in tone and would fit together nicely. Maybe I'll do that next."

I hope to hell he does. Mr. Leichter is definitely a talent to watch.