Even in context, a lot of the show's dialogue sounds like it's out of context, which makes them even funnier when really out of context (this is the moment Inception trained you for). Choosing the best quotes from the season was one of the hardest things I've ever had to do, but eventually, I settled on one from each episode, kind of.

"Eh, so I kissed a priest in a leather bar. Who am I hurting?" - Lillian

Episode 2: Kimmy Goes on a Playdate!

"Now get these kids underground, and don't let the police see you!" - Jacqueline

Episode 3: Kimmy Goes to a Play!

"Playing? I was a Japanese woman!" - Titus

"Is that the sheep captain?" - Gretchen (Lauren Adams)

"I saw Michael Cera grow one, and I was like, 'That's hilarious. I'm in.' " - Bob Thompstein (Evan Jonigkeit)

Episode 7: Kimmy Walks Into a Bar!

"You know, I faked the Saddam capture." - Deirdre (Anna Camp)

Adding Anna Camp to the cast was a genius move.

Episode 8: Kimmy Goes to a Hotel!

"Yes, only after Hermann Goering stole it so he could turn it into a dress." - Russ (David Cross)

"You'll find yourself wandering along a highway or eating at a Boston Market." - Andrea (Tina Fey)

"When we were giving Mayor Lindsay hell and Mayor Lindsay was giving Florence Henderson crabs and the Crabs were a street gang that threw live crabs at people." - Lillian

"I forgot about the one that turned out to be a Japanese prank show and they shot me into the ocean on a toilet." - Titus

It was during the final episode that I realized my own limitations - I couldn't narrow it down to just one, so here are the Top 4 from the season 2 finale.

"Well, Orson, I would love to water that down, if he'll have me." - Jacqueline

"I just was trying to get one minute of peace on a mechanical bull." - Lori-Anne Schmidt ( Lisa Kudrow)

"Why would he put his ear inside himself?" - Kimmy

Any dialogue spoken throughout the season by Bobby Durst, yes Robert Durst, played by Fred Armisen. Armisen's impression was spot-on and hilarious. 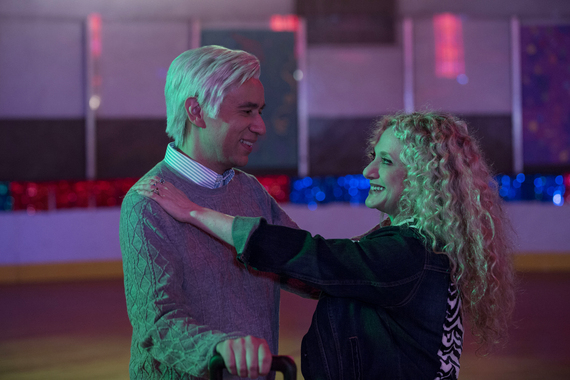