Roman life revolves around the piazzas. Your local piazza is where you do your shopping, have a coffee, catch up with the neighbours, get a drink from the fountain or simply sit on a bench and watch the world go by.

I believe that the best piazzas in Rome fulfill the following criteria:

Piazza San Pietro doesn't make the list, because in spite of its beauty, history and cultural importance, it doesn't have the true spirit of a Roman piazza. You won't find groups of locals hanging out and drinking bottles of Peroni on the steps of the Basilica, for obvious reasons. I've also excluded Piazza di Spagna, which is undeniably picturesque, but feels more like a tourist thoroughfare than a proper piazza.

Here, in no particular order, is my personal selection of the best piazzas in Rome. 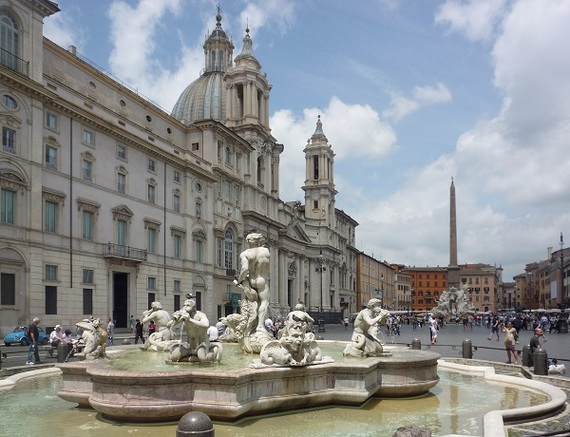 Piazza Navona
Arguably the most beautiful of all the piazzas in Rome, Piazza Navona is particularly stunning at night. The stunning Baroque architecture and the theatrical splendour of the Fountain of the Four Rivers create the impression of a stage backdrop or a film set; it was used to particularly good effect in La Grande Bellezza. The distinctive oval shape - the result of its construction over the Stadium of Domitian - gives it a unique character. But the restaurants, bars, markets and street performers prevent it from seeming like an open-air museum, and there's always something going on. 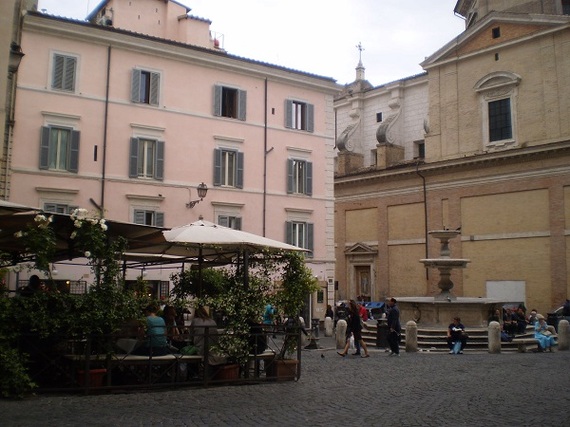 Piazza della Madonna dei Monti
There's always an interesting cross-section of people hanging out on the steps of the fountain, from chain-smoking hipsters to elderly men taking a nap. At lunchtime locals eat their panini and piadine by the fountain, next to tourists perusing their maps as they try to find their way to the Colosseum (it's just down the road).

In the evening the piazza fills up with young people eating pizza by the slice and drinking beer from the bottle, while those who fancy a proper aperitivo go to the bar, which has a lovely outdoor seating area surrounded by overgrown trellises.

Depending on the time of day, the piazza can feel like a tranquil retreat, or the centre of Rome's nightlife, and perhaps it's this chameleon character that makes the square so appealing. 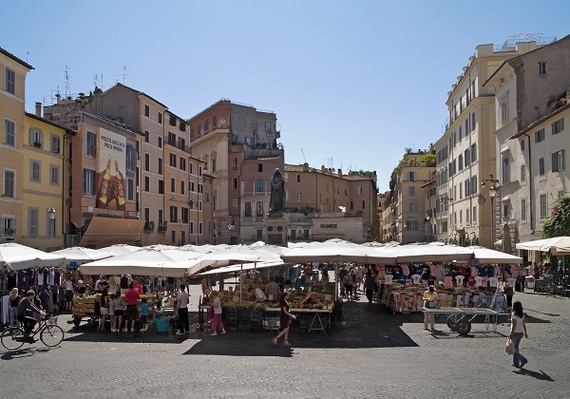 Campo de' Fiori
You could easily spend a day hanging around this piazza, eating, drinking, people-watching, and reflecting on the strange contrast between the beauty of the square and the horror of its history. Look up from the flowers to the solemn, hooded figure that watches over the square. Giordano Bruno, a friar and philosopher, was accused of heresy and burned to death here in 1600. The piazza can get a bit rowdy late at night (drunken students and Italian men chatting up foreign women), and is best experienced in the morning, when the market's open. 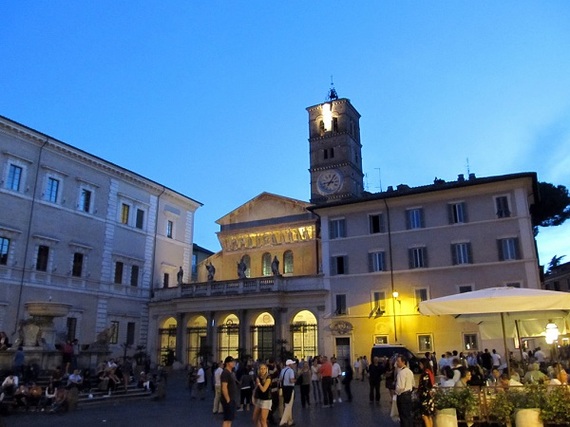 Piazza Santa Maria in Trastevere
It's easy to get lost in the narrow, winding streets of Trastevere, but sooner or later you know you'll find yourself in Piazza Santa Maria in Trastevere. Everyone ends up here eventually, sitting on the steps of the fountain, enjoying a gelato in the shade of the church, or watching the street musicians (and the street magician). The central location of Piazza Santa Maria means that it's a busy pedestrian intersection but also a destination in its own right. Whether you're just strolling through or planning to linger at one of the bars, it's one of the most pleasant, quintessentially Roman places in the city. 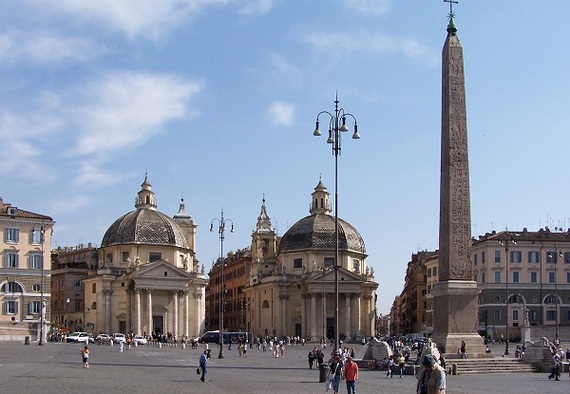 Piazza del Popolo
Piazza del Popolo rivals Piazza Navona for elegance and drama. Whichever way you look at it - entering from Via del Corso, or admiring the piazza from the terrace of the Pincio - it's a graceful, impressively symmetrical square. One side is framed by the twin churches, built in the 17th century, while another side leads towards the imposing Porta del Popolo. For centuries, Piazza del Popolo would have been a point of arrival for travellers - their first view of the Eternal City.

The neoclassical grandeur of Piazza del Popolo makes it easy to forget its dark past. Public executions once took place here, and legend has it that the church of Santa Maria del Popolo was built to chase away the ghost of Nero, who used to haunt a walnut tree in the form of black crows. 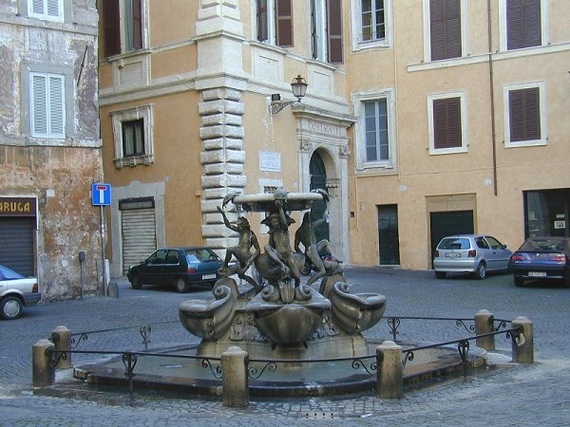 Piazza Mattei
This lovely little piazza is hidden away in the heart of the Jewish Ghetto. Every piazza in Rome has a fountain, but the Fontana delle Tartarughe is a fountain with a difference. Four smiling naked boys throw turtles into the basin above - or catch them, depending on how you look at it. According to legend, this 16th century fountain was built overnight by a duke, in an attempt to win over his future father-in-law. Sufficiently impressed, the father-in-law gave the duke permission to marry his daughter, and to commemorate the event, the duke bricked up a window overlooking the piazza; you can still see it today, on the north side of the square. The charm of Piazza Mattei is that whenever you're there, no matter how many times you've been before, it feels like you're stumbling across a secret. 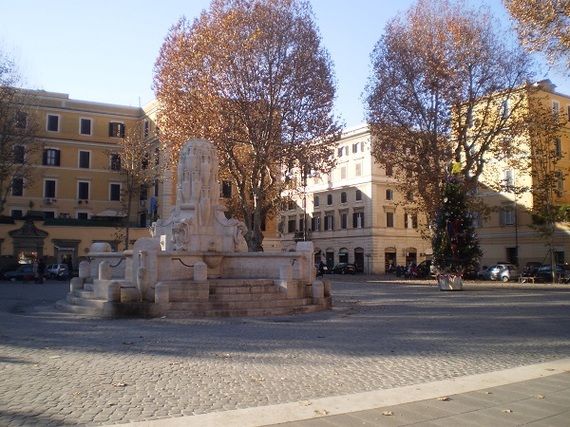 Piazza Testaccio
This is my favourite piazza in Rome, but I admit that I'm biased - I live just round the corner. After the famous food market was relocated down the road, Piazza Testaccio was a desolate building site for a few years. In 2014 it was finally tidied up and opened to the public, with the amphora fountain restored to its rightful place in the middle of the square. Piazza Testaccio isn't particularly beautiful, but it's a perfect example of how piazzas are microcosms of Roman life. Children playing football, old ladies gossiping, couples kissing, dogs barking, the brass band of the vigili urbani (municipal police) playing the trombone...It all happens here.