Alleviating poverty remains a core issue on the global agenda--rightfully so--but serious consideration should be invested in new approaches. The long-tested methods familiar to government and donors simply have not proven themselves up to the challenge.

While some trumpet the great strides that the world has made toward achieving the UN's Millennium Development Goals (MDGs), which range from halting the spread of HIV/AIDS to providing universal primary education by 2015, others cast serious doubt on our progress. The MDGs certainly are a useful blueprint for healthier societies. However, we need to shift focus from marginal improvements to world altering results. If we hope to explode the paradigm, we need new strategies that are not anchored in tired old ideas. 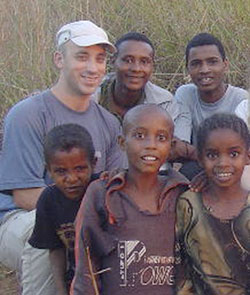 First, we should demolish the mythology around top-down, aid-driven programs as the elixir for global poverty. Quite simply, the classic premise of "aid" to poor nations has failed. While the original intentions were admirable, the Bretton Woods system has proven woefully inadequate in uplifting the poor. The World Bank continues to perform some important work, but it also has squandered tens of billions of dollars and often cemented ineffective policies and corrupt regimes in Africa and Asia. The International Monetary Fund has imposed its draconian, belt tightening policies on developing countries in a manner not so different from electro-shock therapy. Despite the utility of aid, it is insufficient to rescue the billions of human beings caught in the flytrap of dire poverty.

These institutions have a wide set of critics who often point admiringly to the market and big business-driven trade as a better answer. However, "trade" per se is not the solution. Global trading deals and regional economic groupings like ASEAN and Mercosur have driven down tariffs and facilitated cross-border commerce. Widespread market liberalization and privatization efforts have ushered capitalism into once closed economies. While these trends have improved trade and investment flows, the largest beneficiaries typically have been multinational corporations. These large entities discover new consumers and rich profits but there is insufficient trickle-down relief to the bottom billions. Because of the resulting inequities, a global backlash has erupted. It is a movement that speaks to massive grassroots economic frustration. Even a wide range of the establishment elite acknowledge that trade is important but alone cannot unlock the gates of prosperity for those most in need.

It is time to move beyond these flawed constructs and find inspiration in a new generation of solutions. We need to shift beyond "aid" or "trade" and focus on "home-made" - locally developed, enterprise-driven approaches to economic opportunity. Rather than always emphasizing the top-down centralized programs, we should shift direction to embrace bottoms-up, decentralized models of development. In fact, a shift already is underway, one that is empowering the four billion people living on less than $4 per day. And it's happening with minimal assistance from bureaucrats in Brussels or Washington, already initiating a reevaluation about long-standing symbols of aid and trade.

Nobel Laureate Mohammed Yunus is a much deserved success story. Decades ago, the economist postulated that, given the chance, the "unbankable" poor in rural Bangladesh would repay small loans and that microcredit could serve as a viable business model. Today, organizations like Accion and Unitus stand at his side, enabling the growth of the 500-million person microfinance economy that is creating new opportunities for some of the poorest communities on the planet.

Yunus is not alone in his approach. Bangladesh-based BRAC has brought livelihoods to 100 million people since its founding in 1972. Ashoka has supported change-making entrepreneurs across the world. More recently, HealthStore has introduced affordable and much needed medication via clinics in Kenya. Kickstart has helped to develop appropriate technologies that provide clean water and increased irrigation capabilities to the rural poor in Tanzania and Mali. These organizations might not fit snugly into the classic categories of "for-profit" or "non-profit," yet they are transitioning millions of families from subservience to sustainability through job creation and income generation. These are the trends that we should encourage and accelerate, yet only a small number of organizations truly celebrate these achievements. That must change.

In a time when candidates vie for our attention with carefully contrived sound bites and corporate leaders pledge their commitments to social responsibility, a thoughtful discussion about how to uplift the poor is long overdue. Elected leadership and captains of industry in the West should learn from mavericks in the South to avoid past mistakes and blaze a better future. In short, we need more Grameen Banks and less World Banks or Citibanks. We need to suppress our tendency for micro-management and adopt approaches that engage the extraordinary entrepreneurial talent already thriving in the developing world.

Imagine if Western institutions encouraged developing countries not to focus solely on monetary policies, but rather on commercial frameworks that facilitated local entrepreneurship, such as easing the bureaucratic impediments to business incorporation. What if we promoted models of risk taking, such as promoting property rights so that home owners could convert their homes into risk capital to finance new ventures? What if we worked to catalyze the evolution of free but fair markets by celebrating businesses that support labor with compensation beyond wages, such as training and health care?

It is essential that our leaders look more closely at the realities and opportunities in the Global South. While we should not simply forego aid and trade, homemade solutions must become part of the equation. National governments and global bodies should adopt policies that foster the extraordinary entrepreneurial talent present in the developing world. With a soft-touch approach that builds markets and empowers communities, we may not achieve every MDG by 2015, but we might just lay the foundation for a more prosperous future. Jonathan Greenblatt is the co-founder of Ethos Water and a senior advisor to the X PRIZE Foundation, helping to design a global competition focused on entrepreneurial solutions to poverty.

CEO and National Director of the Anti-Defamation League