When Fresh Off the Boat first aired in 2013, entertainment writers were quick to trumpet the importance of a sitcom centered on Asian Americans for the first time in nearly two decades. A little less than two years later, it's both a bit sad and funny going back and reading some of those pieces, because as with most things these days, the build up tends to have plenty vocal supporters, but the follow through rarely comes in the form of continual support. Most of the pop-culture junkies and heavy television watchers I know when asked if they watched the show responded in one of three ways:

A fact that would greatly upset me were it not for the massive amount of critical praise FOTB has garnered in it's short run, not to mention ABC's recent announcement that the show would be renewed for a third season. Yet, the slow liftoff makes sense in retrospect, as the show was plagued with problems before its first episode had even aired. In particular, a nasty feud between Huang, whose life the show is based on, and the series creator Nahnatchka Khan, over creative differences and the direction of the show. The first season went on to run for an abbreviated thirteen episode stint, and though it was renewed for a second season, it came as no surprise that ABC announced the departure of Huang's involvement with the show. Huang's departure, and a few changes to the show's focus has over the course of its first 15 episodes help it quietly transform into a hidden gem.

As it hits the home stretch of its sophomore season, Fresh Off The Boat is staking its claim as arguably the best comedy on broadcast television. 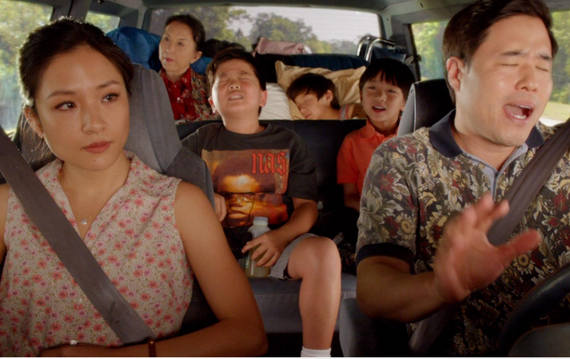 Fresh Off the Boat follows the Huang family as they move from Chinatown in Washington, D.C. to the suburbs of Orlando, Florida, in order for their father to open up a steakhouse and pursue his version of the American dream. The first season of the 90's set sitcom had focused primarily on the life of the protagonist, an eleven-year-old Eddie Huang, his parents Louis and Jessica, and his two younger brothers, Evan and Emery.

Eddie's parents, Louis and Jessica, are played by industry veteran, Randall Park, and newcomer Constance Wu. Park plays the role lovable father figure who is trying to pursue his own passion, but is smart enough to know where he stands as well as the reality of life for immigrant business owners. It's nice to see Park finally receive a series to showcase his incredible talent and humor instead of consistently stealing scenes with his cameos in other people's Emmy-winning TV shows. (Here's looking at you Veep.) Wu, a new face, is utterly brilliant in her role as the strict but loving Huang family matriarch. She manages to bring to her role the rarest of all things in a sitcom comedy: nuance. It was slightly nerve-wracking, when I initially saw it, to hear her accent and think I was going to have to watch a borderline offensive Asian stereotype, but Wu is a special actress. She has done an astounding job in humanizing her character in such a way that she's become the leading force on the entire show. I've little doubt that she'll likely be among the nominated, and if things in this world worked as they should, the winner, for Lead Actress in Comedy during next year's award season. Together, Park and Wu showcase a parental dynamic familiar to many a first generation immigrants currently in their twenties, who often saw one parent or the other be willing to accommodate and change, to let go of some, but not all, the old traditions so that we might fit in a little better.

What really strengthens the show is the work of the wider cast including Chelsey Crisp in her role as Jessica's best friend and neighbor, Lucille Soong, the Huang grandmother who is by far the funniest and most enjoyable character on the show, and in particular the stellar work being done by Hudson Yang, Ian Chen, Forrest Wheeler, the three actors who make up the Huang Children.

Khan's decision in season two to widen the focus of the show on all the members of the family, as well as a few friends, has paid major dividends and produced a truly great ensemble cast instead of smattering of primary and secondary players. The result is a depth uniqueness in the way FOTB handles the racial and ethnic divides across generations, for both children and adults, during the first truly global decade, the 1990s. 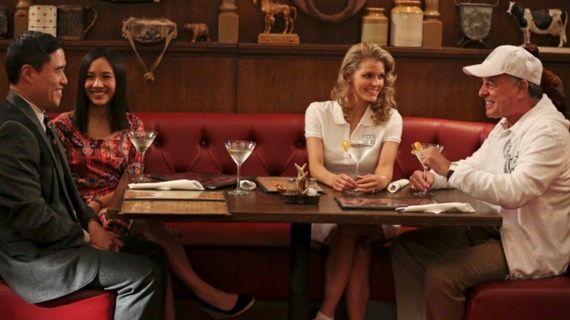 Now that Fresh Off the Boat has found its stride, make no mistake season three will mark the shows entry as a serious contender come award season. It would be smart of the executives and the marketing team over at ABC to start marketing the show properly and with a legitimate effort, because there's an extremely large market that would watch it, if you would bother reaching them.

As a first-generation immigrant myself, one who grew up in the mid 90s and loved hip-hop, I empathize with Eddie Huang and his complaints against the sugarcoating of his life's story, because the process wasn't easy. But for any empathy, in all honesty, there's little doubt that Nahnatchka Khan made the right decision in regards to the direction of the show and her vision of it.

Because really, it's comforting to see a show about, and created by, minorities that focuses on entertaining and being genuinely funny. Too often we burden our entertainment with the responsibility of making a statement or representing a larger group. Especially when it comes to minorities. And yeah, it's a fact there are only few opportunities out there so you represent a larger group whether you choose to or not in those moments (which funny enough, Fresh Off the Boat had an episode on) due to the few opportunities out there for them.

But must every potential series speak to the difficulties inherent in assimilation?

It's about time not that a family about a minority family is on a major network broadcaster, but rather that the focus of that show is on the odd and enjoyable novelty and humanizing moments that are a bi-product of the clashing of often contradictory cultures.

Fresh Off the Boat shows us that sometimes sharing a laugh might the best way to break down the barriers that divide us.