It was a strange series of events. One of the strangest I've experienced in my life. Arianna Huffington (chair, president and editor-in-chief of the Huffington Post Media Group) was giving me advice on sleeping. Only, we weren't doing this in the confines of a private meeting room. No, she was giving me direct, personal sleeping advice in front of over 5,000 people from the keynote stage at the INBOUND 2013 conference (a conference my company hosted last week). Now, ironically, as she is mentioning me by name and dispensing some great advice, I'm sound asleep in a hotel room 27 floors above her. I slept through her entire talk -- at my own conference. 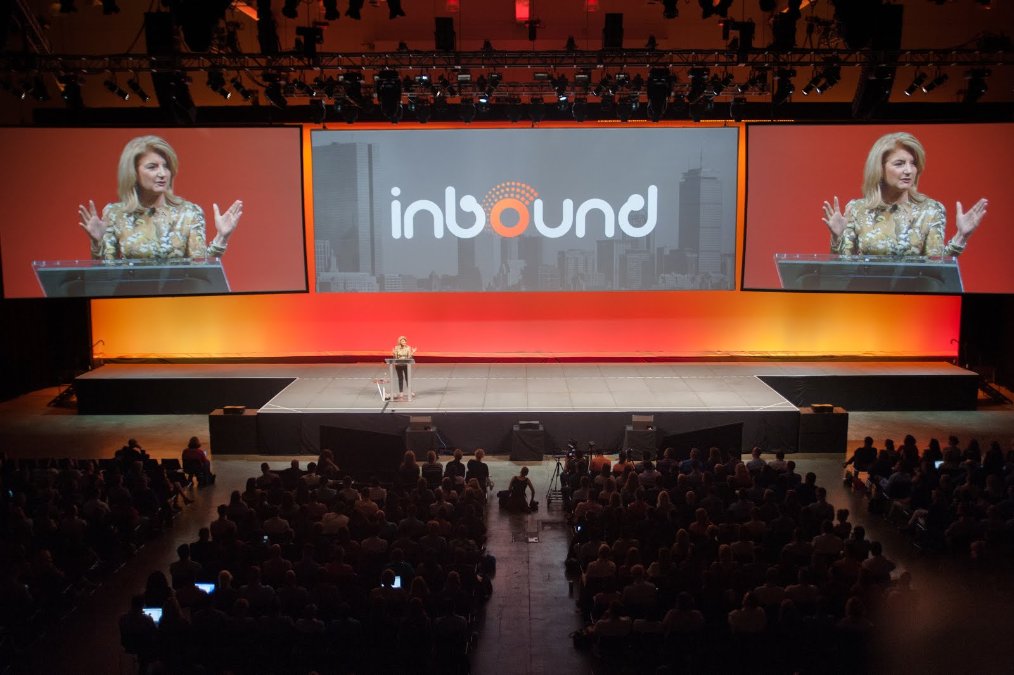 Here's what happened. The previous day, I delivered what was the most important presentation of my professional career: the HubSpot keynote for the INBOUND 13 conference. It's the most influential audience I've ever spoken to, with over 5,000 people in attendance. I had prepared for weeks and weeks. Thankfully, the talk was very well-received, but I was exhausted. (See full recording.) The rest of the day was spent meeting with journalists and media, chatting with other attendees and working on slides for another presentation I had to deliver the next day. That night, I was tired -- but completely wired and could not fall asleep.

Delivered the toughest presentation of my professional career, then spent hours talking shop -- and I STILL can't sleep. #hateinsomnia

I stayed up for another hour or so until finally, I crashed out of sheer exhaustion at a little before 5 a.m.. My body simply shut down. Arianna Huffington was scheduled to deliver a keynote at 9 a.m.. I slept through all of it. I didn't get up until around 11 a.m.. So, as she was calling me out for my late nights and love of technology, I was sleeping like a baby, blissfully unaware. Once I woke up, I had tweets and texts from my wife (who was in the audience and had saved a seat for me) and friends. Evidently, Arianna had seen my late-night tweet and made a couple of references to me in her presentation. Thankfully, we recorded the talk so I had a chance to watch it later that week. Arianna was awesome. It was possibly the best talk of the week (and we had some big names there, including Seth Godin and Nate Silver).

Here's the full video of her talk: Arianna Huffington at INBOUND 13

Lessons On Leadership and Life From Arianna Huffington

On one side are an incredible number of smart, high-IQ, highly-educated people who make terrible decisions in business, media and politics. Go into the average workplace and it's largely filled with burned-out, sleep-deprived, 24/7, hard-charging businesspeople who work incredibly hard to have a corner office... and an eventual heart attack. It's not a great model for success.

On the other side is an amazing new world that is emerging: People and companies that realize being a creative leader requires finding ways to consistently renew ourselves.

Why? " You can't manage creativity. You have to manage for creativity." You must create a space where creativity can emerge and flourish.

Great leaders find ways to tap into their own wisdom and creativity.

But doing so requires redefining the definition of success.

Today, success is mostly defined in terms of money and power, and that is like sitting on a two-legged stool: Sooner or later -- usually sooner -- the stool collapses.

The third leg of the stool, the leg that makes the stool stable, is the third metric of success: Well-being. If we don't take care of our well-being and our health -- in short, our human capital -- nothing else matters.

But most companies aren't run that way.

The average leader doesn't promote values that create the third metric of success. Think of the language we use: "Killing it," "Crushing it..." business metaphors are often aggressive and violent.

That means employees function in an atmosphere of constant fight or flight -- which saps energy, creativity, cooperation...

Instead, be a gazelle.

If there is danger, gazelles run like crazy. The minute the danger disappears they immediately go back to grazing.

Us? We run all the time, even when there are no leopards or lions. We all need to learn to graze.

Bill Clinton famously said he made his biggest mistakes -- although he didn't specify which ones -- when he was extremely tired. How do you reconnect with your energy so you can get back into the things you love to do... but not from a place of exhaustion?

"Burnout is the disease of our civilization."

The business (and personal) world we live in is not really working. To cultivate great employees, to cultivate great leaders who can take us through turbulent times, we can't create a workplace where the choice is either/or.

For example, many people decide they will build a great company... regardless of what happens to their relationships, their health, and their personal lives. If there ever once was an either or choice -- either success or, say, family -- there no longer is. Change occurs at such overwhelming speed that if you are not able to connect with your own wisdom, your own intuition, to know what the needs are before the customers know what they need, to know what your employees need before they tell you... you cannot be an effective leader.

"We tend to walk through life feeling we are running out of time, that it is later than we think... and that's a terrible way to live our lives."

And that affects leadership: It's incredibly hard to lead when you constantly feel you're behind. You can't lead -- you can't connect, listen, and engage -- when you feel rushed.

When we embrace the third metric as a success metric, time opens up for us and we don't live our lives feeling like we're missing out.

And we don't treat others that way, either.

Life must be more inbound.

We have plenty of opinion and science. We're drowning in data. Illumination and wisdom is what we need more than ever -- and that comes from inside, not outside.

"Leadership starts in the bedroom."

Your bedroom should be a place where you can disconnect from your day. Arianna's bedroom is technology-free because it's imperative to have uninterrupted renewal time. The key is to renew yourself so you can emerge the next day with renewed passion and renewed energy.

Sleep deprivation does not indicate virility.

A dinner date once bragged he had only gotten four hours sleep the night before. Arianna thought, If you had gotten five hours sleep, this dinner would have been a lot more interesting.

"Sometimes, the best way to complete a project is to drop it."

Arianna planned to learn German, to become a good skier, to learn to cook... and one day decided she was never going to do any of those things. So, for example when she goes skiing, her kids and friends go skiing and she reads books. And thinks, "Fabulous."

The same is true for your employees. Decide what your team's goals are -- and what they are not. Let your employees focus on what really matters -- to you and to them.

It's OK to abandon projects, ideas or "interests." Just make sure you do so with clarity so that what you drop is truly dropped, both literally and figuratively.

"Live your life as though everything is rigged in your favor."

How often do we go through our lives acting as though everything is rigged against us, from a victim consciousness, as though things are happening to us? That perspective is disempowering.

Every day things will happen that we don't like. The only thing we control is our attitude to what happens. The key is to develop an attitude of imperturbability.

Whatever happens, expand to include it.

The alternative is to shrink, to contract... and then you are smaller than what happens to you.

Always be bigger than what happens to you. Great leaders can take the most adverse circumstances and turn them around. They take criticism and move on despite it.

A year later that person sent her an email saying he was wrong... The Huffington Post had become indispensable... and, "Can I write for you?" (And she said yes.)

"Failure is not the opposite of success"

"Hyper-connectivity is the snake in the Garden of Eden."

A major roadblock to finding that place of wisdom and strength inside us is technology. Technology is wonderful and has created a Garden of Eden of communication and connection... the snake in the Garden is hyper-connectivity.

Take charge and learn to disconnect from technology in order to connect with yourself. To help others -- at work and at home -- you must start with yourself.

Create ground rules: At home, it might be no phones at the dinner table. At work, it could be email: At The Huffington Post, Arianna does not expect anyone to answer emails after hours or over the weekend. Everyone who works with her knows she may send emails at night, but they are not expected to respond.

Mindfulness has a bottom-line impact.

Stress costs American business $300 billion a year. A stressed out employee costs 46% more in health benefits than a healthy employee.

For women the numbers are much worse.

Embracing the third metric isn't just good for us -- it's good for our companies.

Decide not to exhaust yourself -- and your teams -- with "What if?"

As Montaigne said, "There were many terrible things in my life... but most of them never happened."

Put aside the unnecessary worries and you free up energy to really lead and create.

At funerals, people are described in terms of the third metric: Wisdom, giving, friendship, respect, the impact made on others, etc. The deceased is never described by the money she earned or the positions he attained.

If we all take the values we use to eulogize people and incorporate them into how we live and lead, we can change the world.

Find a place to stand.

That place is inside each of us: It's the place of strength, wisdom, and peace.

We've all visited that place, but most of the time we aren't there. When you operate from a disconnected pace, you can't lead. The key is to find ways to reconnect with yourself.

Find the place of wisdom, of strength, and of real connection -- and then lead from that place.

From that place you can truly create miracles... and change the world.

Dharmesh Shah is founder/CTO at HubSpot and blogs somewhat regularly at OnStartups.com. This post originally appeared on LinkedIn.

This post is part of a series produced by The Huffington Post in conjunction with our women's conference, "The Third Metric: Redefining Success Beyond Money & Power," which took place in New York on June 6, 2013. To read all of the posts in the series and learn more about the conference, click here. Join the conversation on Twitter #ThirdMetric.

Co-founder and CTO of HubSpot