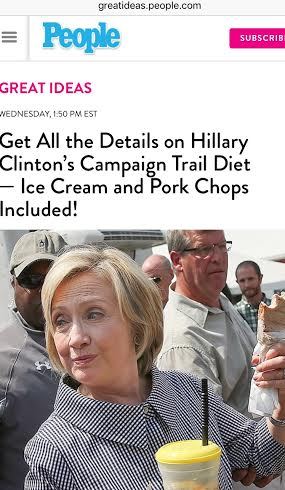 With an African American President of the United States completing his second term--something many of us were too cynical years ago to believe would ever happen in our lifetimes--the diversity of presidential candidates today is notable: among them, the highly conservative African American Ben Carson and two women, each solidly planted on opposite sides of the political spectrum.

Even the "old white guy," as some today are wont to call Bernie Sanders, is Jewish. Sanders's religion is worth noting because, despite the United States's purported separation of church and state, a strong majority of the country still identifies as Christian (over 70% in 2014, according to Pew Research Center)--yet Christians who obviously are becoming more open-minded about accepting nontraditional leaders. (It's worth noting, however, that Sanders, at 74, has been slapped with the label "old white guy," whereas 69-year-old Donald Trump's age hasn't been stated as much of a concern, nor has 68-year-old Hillary Clinton's.)

In any case, concomitant with ever-increasing acceptance of diversity, there's been plenty of conversation about whether the United States of America is ready to elect a woman to serve as president. Back in 2007, Pew's poll determined that a qualified woman wouldn't face much resistance by virtue of her sex. And earlier this year, the Huffington Post reported that "Americans Are More Ready Than Ever to Elect a Female President."

So what's the number one talking point and priority, not just relating to women's issues, but in conversation with women and among women? What's the most important and most laudable thing any woman can do in 2015?

I'm a (gay) man whose majority of friends is women, and my interests tend to lead me toward a lot of women-centric media. For example, I've watched The View for many years, as well as many of the copycat daytime panel shows--The Talk, The Real, etc.--and if there's one consistent through line, even cutting through the general focus on appearances, it's weight.

Take a look at this introduction of Ricki Lake:

This clip is from several years ago, and it's about someone who is decidedly not an elected official such as those described above--but it's effectively the exact same introduction of another high-profile woman on the same show that punched me in the gut a few weeks ago. I was struck by the introduction: the panel moderator introduced an accomplished woman, she walked onto the stage, smooched each host on her cheek, had a seat, and then before anything else was celebrated for her weight loss and made to stand and model for the audience. The audience reaction was a fury of screaming and shouting that I'd normally associate with a football audience, not a talk show.

As this blog article written by a woman opens, "When you're a woman in politics, your appearance matters." She goes on to discuss Hillary Clinton's diet. Just a few weeks ago, the conservative outlet Breitbart picked up an Associated Press story about "Hillary Clinton's 'One Secret' to 'Significant Weight Loss,'" describing the presidential candidate eating "a single tomato slice" for lunch on the road while her staff pigged out on traditional Southern fare. Breitbart has an anti-feminist bent, employing an increasingly well known creature called Milo Yiannopoulos--a sort of gay, English Anne Coulter who'll do anything for attention--who until a few days ago had a poll pinned to his Twitter account showing that more of his readers would rather their daughters "have cancer" than "have feminism." 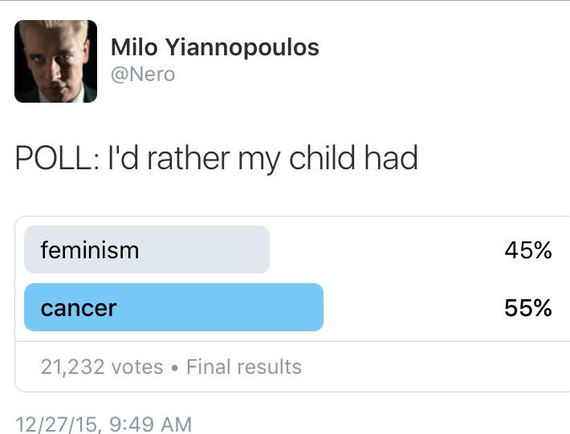 (Yiannopoulos celebrates himself as a "dangerous faggot"; he seems to truly hate women, and if he was birthed by a human being and not conjured in some dark ceremony involving occult symbols drawn on a cobblestone floor and a sacrificed goat, I can't help imagining Grendel's mother bringing him up. He's got issues.)

The AP story focusing on Clinton's diet was easy fodder from which Breitbart could offer up a subtly mocking story, prompting its readers to recommend in comments that, for example, "If she wants to get rid of 10 lbs. quickly she can always decapitate herself..." and "Still has to have one of those little pick-up trucks with the flashing yellow lights and the 'wide load' sign follow her motorcade." Let's be clear: Clinton is a perfectly healthy weight, especially given her age; she is not representative of the American obesity epidemic, nor does she carry a "wide load."

Maybe I'm crazy, but every time I hear female audiences roar over another woman's triumph over five or 10 pounds of fat, or watch Joy Behar, Whoopi Goldberg and Oprah Winfrey congratulate a thin woman on being thinner, and punctuate it with a self-depricating remark about her own weight, I feel like I'm watching someone betray her own tribe. Not being a woman, I know that I'm speaking out of turn when I say this, but perhaps that underscores the point: when a man observes women undermining women--even unconsciously so--maybe such undermining is pervasive enough that it warrants discussion.

I'm not sure what Clinton's campaign was thinking releasing her diet habits through the AP, but the decision to do so opened her up to this kind of attack and attention, rather than focusing on her politics.

It's tempting--because it's standard operating procedure--to dismiss the likes of Ricki Lake and Jordin Sparks and Oprah Winfrey and Star Jones and so many other pop-culture figures' weight loss stories as being irrelevant to female political candidates. It's true that Clinton isn't paraded out onto The View and made to model her body while people hoot and holler in congratulations for doing The Greatest Thing Any Woman Can do, but that's only because it's unbecoming of a politician to participate in such antics. The campaign nevertheless contributes to the cultural bad habit of objectifying women by divulging her weight loss secrets.

As a gay man, I know something a lot about pressures to have an unattainably perfect physique. (I used to succumb to this pressure but no longer can for health reasons.) Yet witnessing, time after time after time, women--only women--being celebrated or maligned for their weight leaves me feeling uneasy. I wonder if women didn't participate in this obsessive prioritization of weight whether Donald Trump would get away, as he always has, with calling women "fat pigs."

It's not even so much the focus on weight, but the extreme reactions with which weight loss is met: Seeing, and more pertinently hearing, explosive audience reactions on talk shows anytime a woman is said to have lost 10 or 15 pounds, makes me realize how nothing else--absolutely nothing--triggers such intense emotion. It's the first talking point and the most resonant one.

Why? I honestly have no idea. Not always but often it is female interviewers who bring up weight loss--again, almost always as the first point of conversation, suggesting it's the most important--and always with bewildered "how do you do it? Tell me your secret," and often followed by some kind of self-criticism, even when the interviewer usually isn't overweight. It feels orchestrated and damaging, but also inexplicably self-perpetuating.

Years ago, Oprah Winfrey famously lost so much weight that she was compelled to wheel a wagon piled high with nausea-inducing fat onto her stage to show just how disgusting her body was before, and how perfectly acceptable it is now. By now, we all know that Winfrey has been on that roller coaster all her adult life, which she hasn't been shy about discussing. But now 60, now a multibillionaire mogul with her own self-help network, she's broken out of the shackles of valuing thinness above all else. Or so I thought until my stomach turned a few days ago as Oprah appeared on my television hawking for Weight Watchers.

So what is the most important thing any woman of any age can do? Looking at the media, whether it's network or cable news, a political debate, feature films, day or nighttime talk shows or the commercials that bridge them, the answer is clear: The most laudable thing any woman--regardless of her current size--can do is to lose weight.