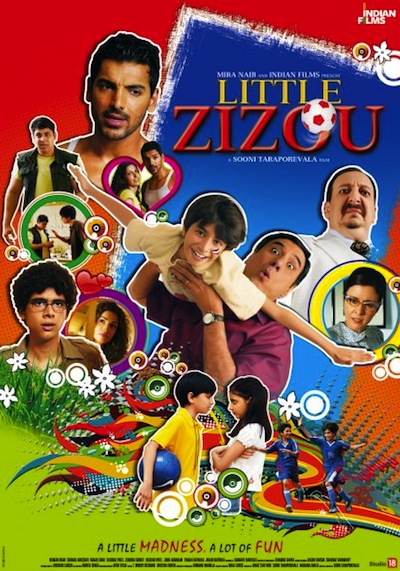 Sooni Taraporevala's film Little Zizou -- which can be watched for free these days on Hulu -- always makes me yearn for my first true love: Bombay. Because Little Zizou represents the perfect template of the city known to outsiders as Mumbai but beloved by insiders forever as Bombay, the craziest, most chaotically beautiful place on earth, the one single spot that invades my senses and dreams even as I write this, lands away and miles apart.

While it is ideal for cinema to transport its audience to other worlds, it's not often that a film manages to do it quite as well as Little Zizou.

The story is wonderfully simple: Xerxes (played by Jahan Bativala), or "Little Zizou," is a young boy who prays to his late mother to send his soccer idol Zinedine Zidane on a visit to Bombay. His elder brother Art (Imaad Shah, who is also featured in Mira Nair's The Reluctant Fundamentalist) is a prolific cartoonist, a romantic with a fantastic imagination and a group of friends determined to achieve the nearly-impossible, while the boys' father Khodaiji (played by Sohrab Ardeshir) is a religious leader of sorts, with prophetic aspirations and a flair for the dramatic. Because of Khodaiji's fanatical convictions, the boys spend most of their time at the home of their father's archrival, Boman Presswala (a treat for lovers of Indian cinema as he's played by Boman Irani, a beloved star), a principled newspaper man with a loving, kind wife Roxanne (played by Zenobia Shroff) and two girls. While Art pines for the elder one, the younger Liana (Iyanah Bativala) resents the presence of Xerxes, who is tended to with care and attention by her mom. It is a modern fairy tale, with a story as old as love itself.

Little Zizou does tell a story that is unmistakably woven into the tightly knit Parsi community to which Taraporevala herself belongs, but this film is also about any child with a deep sense of longing for his mother, any teenager trying to grow up in a world where dreams are difficult to hold on to, any woman who has enough love in her heart to spread to more than her biological children and any man who believes that the freedom of speaking the truth is worth fighting for, at any cost. Far from ever preaching or teaching, Taraporevala manages to infuse the film with humor and charming inside jokes, like the newspaper headline at the beginning of the film declaring "The Namesake wins Oscar for Best Film!"

Yes, because while Little Zizou is Sooni Taraporevala's directorial debut, she is best known as the screenwriter of such Mira Nair hits as Salaam Bombay, Mississippi Masala as well as adapting Jhumpa Lahiri's The Namesake for the big screen.

Ever since sitting in the audience for the unforgettable film's premiere in 2008, I've come to spend quite a bit of time with Taraporevala and her wonderful family. Turns out the Taraporevalas and Bativalas (both Jahan and Iyanah, who play the central characters in the film, are the filmmaker's children in real life) are even more fantastically brilliant than the characters of Little Zizou, but watching the film comes in a close second.

Here's a bit of insight from Taraporevala about the Parsis, her cinematic inspiration and becoming a filmmaker "luck by chance".

You have lived in such diverse cities as L.A., Bombay and NYC...
And Newark, NJ! 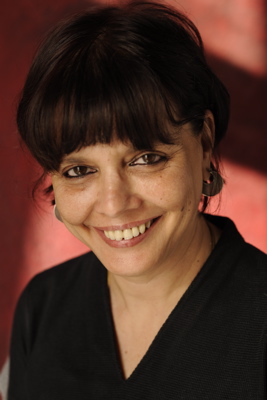 I like Bombay the best because that's home for me and it's the city I grew up in. It's the city I am most used to. I love the crowds, the smells, the noises of Bombay and every other city I have lived in, I always compare it to Bombay. So New York compares the most favorably because it's most like Bombay -- you know the smell of urine, the crowds, the energy and it's a culturally diverse city. That complete sense of life being in your face all the time. You can't escape it, it's right there. I would say Bombay comes first, New York comes second and L.A. comes last! In L.A., I love the weather... I only like New York in the spring and summer, I can't stand it in the winter, I find it utterly depressing. In L.A. the weather is gorgeous but when I was living there it just felt like such a one-industry town. It felt so removed from real life, very empty, almost numbing in a way.

Who are the Parsis?
Parsis are followers of the world's first monotheistic prophet Zarathustra who was born more than 3000 years ago in Iran. With the Arab invasion of Iran, a group of Zoroastrians fled to save their religion. They sailed away and landed in India 900 years ago. These strangers were called "Parsis" (from 'Pars' -- Persia). Today there are only 70,000 Parsis left in India, 250,000 Zoroastrians around the world.

Are some of the characters in the film based on real persons in your life?
Yes, some are... [Laughs] Lets leave it at that.

What inspired you to become a screenwriter, and then what pushed you to go even further and tackle directing?
As they call it in India "luck by chance," truly! My life has been totally unplanned and I never thought I'd be a screenwriter. It just so happened that I met Mira [Nair] in college and we really hit it off, bonded, became really good friends and had similar interests. We knew we wanted to work together at some point, so we worked on Salaam Bombay and that was such a hit. Then, I found myself with a career as a screenwriter. I was a photographer before that. Again, photography also wasn't planned, since before that I was studying cinema studies, which is theory and criticism.

The film appeals to the audience on such an emotional level. Even to people who are not from the Parsi community, who may have never been to Bombay. Because ultimately we feel that it's real, it's not a fantastical story that could never happen. The characters feel like people we may know or come to know, at some point in our lives. Is that why you directed the film yourself?

Who has been your inspiration as a director?
Woody Allen. He is a writer as well and I feel close to his personality -- he's more of a quiet type on set, not a yeller and a screamer. I read something he once said which was that the way he directs is to choose the best person for the role and then let them do what they are really good at, which was my philosophy. If you have someone who is a really good actor being a director, that person can show the actors how it should be done, but I couldn't do that so I did what would work best for me. Everyone on the set of Little Zizou was never far out of their comfort zone.

Where do you see yourself in five years?
I have no idea! That's what I like about my life, I don't even know what I'm going to be doing tomorrow. I like it this way. Mira's dad used to call me "Rudderless Ship." I have since kind of found a rudder, but a part of me is still that ship.

Photo of Sooni Taraporevala by ©Farrokh Chothia, all images courtesy of the filmmaker, used with permission