Lately there's been so much focus on newcomers like acai and kale that less glamorous fruits and vegetables are sometimes treated like second-class citizens. But researchers are discovering new reasons to get excited about the old standbys.

A fixture on the oft-ignored crudité platter, celery is back on the must-eat list as a potential cancer fighter. It's a top source of a flavonoid called apigenin. Researchers recently discovered that when pancreatic cancer cells were treated with apigenin, 44 percent of the cells died. Apigenin activates a chemical reaction inside diseased cells, causing them to self-destruct, says study coauthor Elvira de Mejia, PhD. While eating celery can't cure pancreatic cancer (you'd never be able to eat enough), de Mejia says that over time a diet containing apigenin-rich foods may help prevent the disease.

The skins of these snackable bites are bursting with resveratrol, the same superstar antioxidant that helps make red wine good for your heart. Now a study in Molecular Nutrition & Food Research has discovered that resveratrol may also aid in boosting immunity -- by helping increase levels of a molecule that kills bacteria and viruses. Study coauthor Adrian Gombart, PhD, says adding more grapes to your diet may even protect you from contracting infections in the first place.

For years fungi have been thought to be heart healthy and immunity boosting. Now science shows that they may even help prevent breast cancer by lowering estrogen levels, says Shiuan Chen, PhD, professor and chair of cancer biology at Beckman Research Institute of City of Hope in Duarte, California. Chen found that when postmenopausal women consumed 13 grams of mushroom powder (the equivalent of 1 and 1/3 cups of white button mushrooms) per day for three months, their estrogen production dropped by 27 percent.

Researchers have long known that smokers have a lower risk of developing Parkinson's, a disease characterized by a loss of brain cells that make dopamine. No doctor would encourage lighting up, but there may be another way to get the benefit: peppers. They're a safe source of nicotine, which may protect dopamine-producing cells, says Susan Searles Nielsen, PhD, whose study, published in the Annals of Neurology, found that eating peppers (mostly bell peppers, but spicier varieties count, too) twice a week or more was associated with at least a 30 percent reduced risk of Parkinson's. 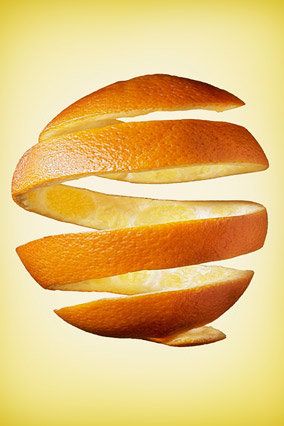 1 / 6
Orange Peel
The peel contains more than four times as much fiber as the fruit inside, and more tangeretin and nobiletin -- flavonoids with anticancer, antidiabetic and anti-inflammatory properties. A 2004 study on animals suggests that these nutrients may even reduce harmful LDL cholesterol better than some prescription drugs. <strong>How to eat it: </strong>Grate and sprinkle zest on green beans or asparagus. For dessert, simmer strips in simple syrup and cover in melted dark chocolate.
Dan Saelinger