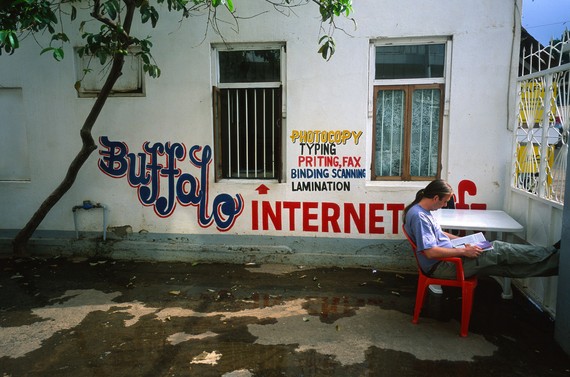 When people hear you "work remotely" (especially if you're a travel writer), they pretty much assume you set your laptop on a beach chair, pop open a cold beer, and get to typing while scantily clad women fan you with palm fronds. Unfortunately, that's not true.

I should know. After a year of working on the road from cramped coach seats, cruise ship lounges, and remote prairies in South Dakota, I've found that it's not nearly as simple as finding a seat in the Downtown Indianapolis Panera and busting out your laptop, even if the Indianapolis Panera is a lovely place to work. It often means crappy Internet, dead phone batteries, and a lot of frustration/wasted time. And it often means changing up how you work in order to get the most out of your time spent offline.

And since you never know when the boss is going to send you to Davenport to close a big brake-pad deal, here are a few things I've picked up along the way that can help you work more efficiently while traveling.

More: 8 Ways to Spot a Crappy Hotel When Booking Online 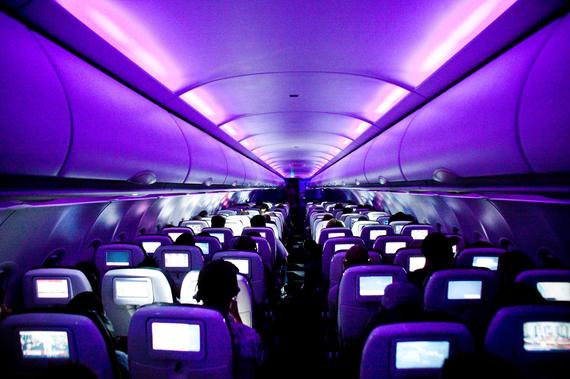 Gogo Is. The. Worst.
So this isn't so much a tip as it is a complaint really. Gogo -- the Wi-Fi on almost every US commercial carrier -- isn't like the Internet on the ground. Unless you happened to be on the ground in 1995. It's painfully slow, you can't stream anything (forget watching House of Cards), and it disconnects whenever it damn well pleases. Also, you get to pay about $5 an hour for the privilege of it all. But guess what? It's pretty much the only game in town, so you're gonna have to take what you can get. Which means...

Get the monthly, all-airlines Gogo subscription
Gogo isn't cheap and $29.95 might seem like a lot to pay for five hours of Internet from New York to LA. But if you take more than two flights a month, the monthly subscription ($49.95) is the cost-effective move. That said, subscriptions are ONLY good on the airline you purchased them on, so if you know you're flying Delta this week and United next, spring for the multi-airline pass ($59.95). Even then, you still need to be careful: Gogo bills automatically for the multi-airline pass every month until it's canceled. And the subscription doesn't apply to Southwest. See, we told you Gogo was the WORST.

Prep your computer in the boarding area
Much like some family members, Gogo isn't to be depended on for much other than frustration. So use this time with the faster airport Wi-Fi to line up everything you might need in the air: download large files, open articles in separate browser tabs, and cut and paste important emails into a Word document so you won't be stuck without them.

Oh yeah, and don't ever assume you can charge anything onboard
Even airlines that advertise onboard plugs often reserve those for first/business class or main cabin premium seats. (Think Exit rows and bulkheads.) The rest of us should plan to crowd around the charging station (the rules of which we've outlined here) when we get to the airport. Alaska Airlines and Virgin America are the only airlines I've flown recently that consistently have outlets. But even then, it's not a guarantee. 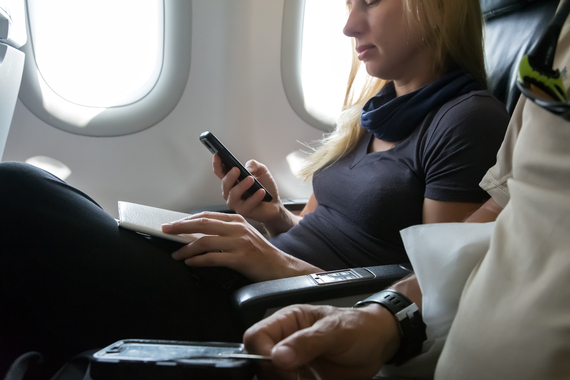 The beginning of your flight is the best time to use Internet
Like, as soon as you hear that magic "ding" that announces "time to get to work," start downloading like you're a 12-year-old with parents on their way home. Or, do whatever it is your doing that involves the Internet. As is the case with most connections, the more people online, the slower it gets. For the first 20 minutes of the flight, I've found in-flight Wi-Fi is almost usable.

Unless... you're flying over water
Trans-Atlantic/-Pacific flights are another deal but on flights across the Western Hemisphere, in-flight Wi-Fi is beamed up from towers on the ground, not down from a satellite over your head. So, if your plane is crossing a large body of water, don't count on getting any service once offshore. (Flights over the Gulf of Mexico often stay close enough to land that this isn't an issue.) Same goes for crossing borders: your Wi-Fi will work for a hundred miles or so once you cross into Mexico, but once that US signal goes out, so does your connection.

To find out 5 other ways you can become an out-of-office master, get the full story at Thrillist.com!