Passover sneaks up on me. With our two older daughters away at college and no invitations to attend a Seder elsewhere, the holiday seems easy to ignore. Then, on the second night, Atticus asks, "When's our Seder?"

I demur, citing a busy week, feeling overwhelmed by the idea of preparations. Even for the low-key Seder we typically host, I know we still need to shop, tidy, invite some people.

Seth offers, "We could have one Friday; Mom and I don't have school."

And so we hold our Passover Seder on Good Friday, mingling once again the traditions of our family.

Seth and I have spent our life together making theatre. We are at our finest during Tech Week, focused on the needs of a show. The Seder is a mini-production. With only six guests, we feel secure in the choreography developed over decades. He shops; I cook; we squabble over the piles of paper that migrate to the dining room table -- truthfully, mostly mine. He puts extra leaves into the table; together, we lay the tablecloths, pale green brocade on the bottom, lace on top. He arranges chairs, fits candles to holders, soothes my irritation that none of our cloth napkins match. I make an emergency trip to market for red potatoes and nice paper napkins; he gets out the family silver -- my family silver, which had never seen a Seder until I inherited it. I cut the stems of the flowers he chose; he sets the table with china we found after my mother's death four years ago. In boxes on her third floor, protected by plastic sleeves, carefully labeled "For Ann," was a china service for twelve from my grandmother. Atticus attempts to polish a tarnished silver pitcher, pronounces the process disgusting and takes the dogs for a walk -- his effort to be of use.

Our guests arrive and we put them to work -- preparing one more tray of garlic and rosemary potatoes, uncorking wine. Finally, we sit down. Several have never been to a Seder. I feel slightly apologetic; after all, this is just our family's version. Early in our marriage, we wrote our own Haggadah with a feminist theme, updated and illustrated by Miranda and Cordelia, our daughters, in 2002. It's unique to us, to our Jewish-Christian composition.

Atticus asks the four questions confidently, reads from our Haggadah fluently. The candles flicker; the horseradish is intense. Sunrise, Sunset comes to mind as I think of Miranda and Cordelia beginning their own traditions away from us.

Seth gleefully recounts the tale of my very first Seder at his Aunt Ursula and Uncle Bob's home on Long Island in 1983. Arriving late because Seth had to buy a pair of decent shoes per his mother's request, we are picked up at the train by Seth's stepfather, Jerry. As he pushes open the back door, Jerry bellows, "Beware, Protestant in the house!" I blush; I have never met these people. A Cantor leads the service, which is lovely and foreign. When the gefilte fish is served, there is much interest in my reaction.

"You don't have to eat it," reassure Seth's cousins, Carin and Rena, both so beautiful that I am intimidated by their kindness and their loveliness.

"Sure, she does," rib their husbands, both named Steve, and Seth's other cousin -- also, Steve.

Knowing a guest eats politely whatever is put in front of her, I take a tentative bite. Glad that horseradish has always been a favorite condiment, I push a little more onto the fish and make my way though the serving. Test passed.

Invoking Tracy Lord from The Philadelphia Story, I extravagantly admire a flower arrangement of calla lilies, but the blooms are fake, and, somehow, I feel embarrassed, as if I ought to have known. Next, I notice a striking black and white photograph. Seth's mother and aunt explain that it is a picture of them with their mother, boarding the boat to flee Germany in 1939. The young man in the photo, a cousin, was taken away by the S.S. and killed. I have no words. The Holocaust, about which I know vaguely, mostly through The Diary of Anne Frank, is alive in this living room on Long Island. I am mortified. I stop talking. A few years later, Seth and I marry, acquiring a Seder plate of our own.

In Shaker Heights this week, I am thirty years past that first Seder. Our door is open for Elijah, each tradition cherished, familiar. I look across the table at my beloved as he reads from The Song of Songs. My WASP grandmother's china participates with equanimity in an ancient Jewish custom. We introduce Charoset to some who have never enjoyed its sweetness. I see the delight on one guest's face when she learns that we always serve vegetarian matzoh ball soup because Seth and the girls are vegetarians--and so is she! We dip our fingers into our wine, shouting each plague that afflicted the Egyptians and dropping wine onto our plates. The children hunt for the Afikomen. We sing We Shall Overcome and Go Down, Moses and Dayenu as boldly as our small group can; I miss Cordelia, who keeps us in tune, Miranda, who speaks Hebrew so beautifully, and Jerry, who sings with abandon. I am sad not to be with all our relatives.

The Holocaust no longer feels distant; recently, I completed an on-line class called The Holocaust and Human Behavior offered through Facing History and Ourselves. Throughout this amazing, challenging course, I considered often what I, a Christian woman, might have done as Hitler came to power. Would I have risked my own life to save my family, my Jewish family? I hope so, but I understand, more than ever, that in each of us is the capacity to be both our best and worst selves. Passover reminds me of hope and rebirth. And, fresh from this course, I am convinced that the story of the Exodus needs to be told again and again, so we do not forget our responsibility to work for freedom--for all. On the internet this week, there is a story of Ukrainian Jews being asked to register--false as it turns out, but horrifying all the same. There are many ways in which we accept slavery or willingly enslave ourselves. Putting work ahead of family feels like a kind of bondage I accept too easily, too often.

I came to Seders as a stranger, grateful to be included in the tradition, then insistent that our own children grow up with the ritual. I have both adopted the evening and been adopted by it. In the busy days of spring, I almost forget to honor the commitment Seth and I made to one another, to our children. Traditions matter. They cannot be skipped. I am grateful to Atticus for helping me to remember what is essential, to Seth for making space for celebration. 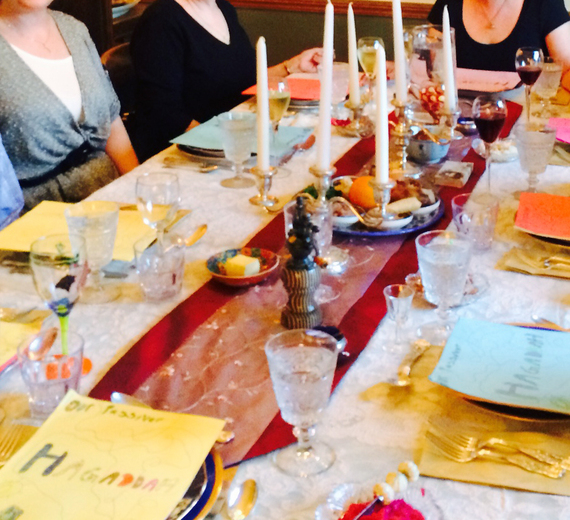