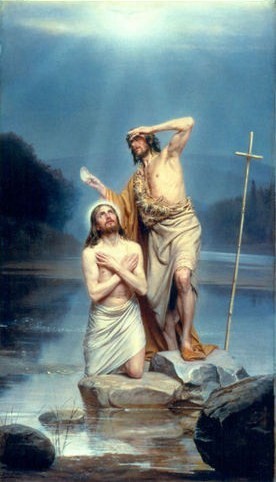 After the enormous response to my last post, I want to share some more of the story about why Jesus and Christ are two different entities. They do become one eventually, in full maturity, in a similar way that a child grows in the womb, is born, and develops into an adult over time.

What is the point of understanding the process of Jesus taking into himself the Christ you may ask? Isn't it simpler and easier just to worship the one being and be done with it? In fact why even differentiate between God, the Father, Christ, and the Holy Spirit?

If the detail is not important, why does the Bible have so much detail?

Surely not so we can boil it all down into a few basic ideas! What is the point of that?

We unlock the Bible when we look into the detail and see its place in human evolution, and in our own lives -- that is its point and purpose. The Gospels tell us quite clearly that Jesus began his intimate relationship on this earth with Christ at his Baptism when he was 30 years of age. For this reason, the Gospels of St Mark and St John begin with the baptism of Jesus. St Matthew and St Luke begin with the birth of Jesus and that is a story for another time.

It is also interesting to note that Jesus is not referred to as the "Son of God" until after the baptism.

A thorough study of all four Gospels shows that each writer looks from a different angle at the life of Jesus; the first time their views coincide is with their accounts of the baptism.

The baptism of Jesus is celebrated each year on the sixth of January with the religious festival of Epiphany. The word epiphany is a combination of two words, epi, meaning on, to, and phainein, meaning to show. Epiphany then means to manifest, to come into view. At the baptism of Jesus, facilitated by John the Baptist, the physical appearance of the mighty Cosmic Christ Spirit manifested. How did it manifest? Like a dove. Let's look into that.

In those days Jesus came from Nazareth of Galilee and was baptized by John in the Jordan. And when he came up out of the water, immediately he saw the heavens opened and the Spirit descending upon him like a dove; and a voice came from heaven, "Thou art my beloved Son; with thee I am well pleased." Mk 1:9-10

"These things I have spoken to you, while I am still with you. But the Counselor, the Holy Spirit, whom the Father will send in my name, he will teach you all things, and bring to your remembrance all that I have said to you. Jn 14:25-26

If Christ was already present in Jesus why send the dove / Holy Spirit? We can look at these beings as The Trinity, or we can look at them individually to see the different work each one does. We can also ask, if Jesus and Christ were one being all along, was this baptism necessary? Also, why was it suggested that John the Baptist might be the Christ? Read what St Luke says.

As the people were in expectation, and all men questioned in their hearts concerning John, whether perhaps he were the Christ, John answered them all, "I baptize you with water; but he who is mightier than I is coming, the thong of whose sandals I am not worthy to untie; he will baptize you with the Holy Spirit and with fire. His winnowing fork is in his hand, to clear his threshing floor, and to gather the wheat into his granary, but the chaff he will burn with unquenchable fire." Lk 3:15-17

Jesus was no stranger to these people; he was part of their life working as a carpenter. If Jesus and Christ were one, why would people say John might be Christ? Luke also says they "were in expectation" which means they knew something was going on, just as we sense something is going on in our own lives at times.

What was going on here was the entrance of the mighty Christ being into the earth, or at least the beginning of the process. It was begun by the Holy Spirit. Jesus was the most pure person on the whole earth able to withstand the power of these heavenly beings. Taking the Christ into himself took three and half years. It wasn't until he was nailed to the cross, immobilized physically, that the Christ could enter fully into him, right into his bones -- which is why which is why "Not a bone of him shall be broken." Jn 19:36

Understanding these details can give us a greater sense of expectation during Holy Week as we walk to the cross with Jesus knowing him more completely.

Image: The Baptism of Christ by Carl Heinrich Bloch